In the days of the Civil War, the soldiers relied on rationed food such as meat, stale bread or hardtack, and coffee which were scarce. They carried these items in their haversacks and would cook these items when they were settled. It’s difficult to declare which had a better effect on their health in the long-run, food or coffee. Food was extremely scarce that most meals were skipped due to the lack of resources. Also, mostly the soldiers had little experience with cooking which unfortunately lead most of their meals remain raw including the meat. The food was more susceptible to cause illnesses due to the fact that the food wasn’t cooked correctly and the maggots that had taken shelter in their meats as well as their hardtacks. However, coffee was more readily available. They had received about thirty-six pounds of coffee each year which was enough to satisfy the soldiers.

Personally, based on the existing war times, I would agree that the soldiers could have given up food for coffee because coffee was easier to prepare and had more availability. Consequently, even most of the food that the soldiers consumed was raw due to their lack of cooking skills. Also, the harsh weather conditions required the soldiers to reserve heat which was easy with the addition of preparing the soothing flavor of coffee. The coffee was also a good sleeping aid because of its warmth and flavor qualities. It was a great way to wash down all the horrible tastes of the meal, they had just consumed. As an added bonus, the caffeine in the coffee possessed a great energy boost for the soldiers that assisted them to continue in their battles with more willpower to pursue in the battle to conquer. Ideally, the most fascinating concept about the Civil War soldiers’ diet for coffee is in comparison to the numerous citizens now in this era. Americans run on coffee, just as the soldiers used as a staple to their day. Now, I am an avid coffee drinker, making it one of my favorite drinks that I can’t live without because it is ultimately one of the best beverages I have ever tasted. 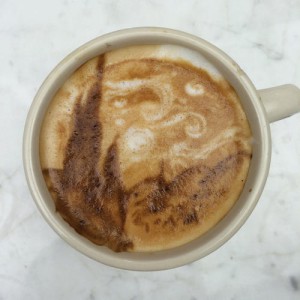 “The Starry Night” by Vincent van Gogh depicted through latte art which is one of the best ways to enjoy a cup of coffee. 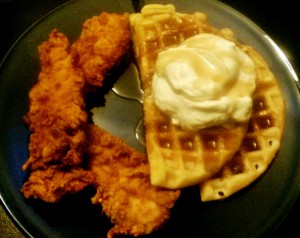 The Best Lunch! And it makes for a great photo op.

I solely believe that food is art despite the particular model of camera. With the advancement in food technology and techniques, any type of food can become an edible masterpiece. As portrayed in our class, food can be as artistic as Leonardo da Vinci’s “Mona Lisa” such as the “Double Mona Lisa” by Vik Muniz that we discussed which entirely consisted of peanut butter and jelly. As well as his other art works like “Action Photo, After Hans Namuth”, which depicts the recreation of Hans Namuth’s photograph of Jackson Pollock painting in his studio. The portrait was created solely from chocolate syrup.

Pictures that are captured on a cellular device can be considered as art based on one’s perception of artistic value within photography. Sometimes, food-themed pictures taken from cell phones are only for entertainment purposes. In this modern day society of social media, sharing interesting personal thoughts and intimate moments through havens such as Instagram, can show their food encounters in a more universal setting. But food pictures can possess certain qualities that express issues in an abstract, artistic way. “Frozen Foods with String Beans” by Irving Penn displays the complex truth about the nutritional values of frozen foods based on shapes, sizes and, ultimately, coloring through his portraits. There are many categories in the practice of photography and all can be evoke different levels of art. Irving Penn once said,

“A good photograph is one that communicates a fact, touches the heart, and leaves

the viewer a changed person for having seen it; it is in one word, effective.”

When it came to food, he responded with this simplistic quote that explains all food themed pictures, “Photographing a cake can be art”. (BBC News, “American photographer Penn dies”, 2009)