The first headstone on my Mount Rushmore surely goes to my second oldest brother Abe. Abe is currently detained at a state Correctional facility Upstate. Standing tall at 6’5 or 6’6 the last time I saw him. Instead of balling against high competition high school or college basketball, he dominates against jails birds. As of late, life has been extremely overwhelming for me. I was sure my older brother had the potential to be on a “ballislife” agenda. Unfortunately, Abe got distracted while hanging with bad influences and as of now it’s to late for my brother. This puts me in the perfect position to redeem him because I know my brother is great person at heart.

Its mandatory that the second headstone on my Mount Rushmore goes to my oldest brother Mamadou. For being the best role model a younger brother could ask for. After taking on a double major one in business and the other in fashion as a freshman. I’m proud to say my brother will be graduating next spring with his degree. Mamadou was able to attain this through all the stress brought upon him after hearing little brothers are both arrested. News that’s extremely detrimental and stress heavy.

The Third headstone on my Mount Rushmore goes to my late friend Ty Millz, may he l Rest In Peace. I find it so unfair when speaking about the condition in which I live in. The death of Ty Millz, for instance, there is no reason why a drive by shooting happened and the killers have yet to be found. It’s ironic how the people in the hood know but the district police doesn’t. A death that happened late last year at that. I guess what they say is true about the good dying young. I say this only because Ty Millz was one of the most chill dudes in the hood and he was just getting ready to graduate from high school, truly a sad story.

Lastly, for the final spot on my Mount Rushmore I would have to put my high school diploma there. Then, it will soon be replaced with the degree I am expected to get from City Tech. My high school experience was far from ordinary, after being arrested and placed in the juvenile system just before my Junior Varsity basketball season was fully underway in my sophomore year. After a long 9 months, I was released just before my Junior year and my original high school accepted me back. I won’t speak about the adversity I faced when I got back in my Junior year because it doesn’t matter. Moral of the story I am a high school graduate and determined to be a college graduate.

I’m going to start off by speaking about my 2nd oldest brother Ibrahim. Abe was a Lot to deal with on the court standing tall at 6’5 or 6’6 the last time I saw him when he was on Rikers. Instead of playing basketball against high competition High School Ballers on attractive basketball courts he dominates against Jail Birds Sadly. I swear my brother was talented professor if you heard of a school called Wings Academy their head coach his name is Billy. Billy went of his way to go watch my brother play in games multiple times while he was in 8th Grade, then recruited him to the school. On this team my brother was the only skilled player. That didn’t matter Abe was able to take MS.45 To the second game in the playoffs. He had to be averaging at least 20 plus that whole season. Now as he has told me over the phone “He dunked on somebody and they was so mad that they wanted to fight.” Life is crazy Getting arrested wasn’t in the plans. Who knows my brother could’ve probably been the next Kevin Durant had he been in the town on a “Ballislife” Agenda. Free my big brother, sometimes when I think about his situation it puts In a bad state of mind. In this moment in my life I just want to work hard and stay out the mix.

My story would speaking on how I’m Just that I’m going to college in first something that a lot of people in my town didn’t do and just went the working way. I would prove a lot of people thoughts about me wrong. I could finally set that example for my younger siblings so that they can see that my older brother isn’t one of those people that just settled with his high school diploma. Instead, he went to college working towards getting his degree.

If I had one wish it would be to have my family back from the system. We would like a chance to restart, only Allah knows how much potential my family had but now most of my siblings time is being wasted in a corrections facility

4) I lost one of my good friends late last year to gun violence. I find it so unfair when speaking about the condition in which I live in comparison to others.

According to “Boys and Girls Together, taught Separately in School” by Jennifer Medina she argues for boys and girls to be taugh in single sex classes because of decreasing test scores and behavioral problems. I respectfully disagree with what was said because there are far more things that could cause a decrease in test scores or behavioral problems.

In the text it states “boys particularly those from low income families, tend to focus better without girls around.” I would like to respectfully disagree, since I already come from a “low income household”. I can be the first to tell you while sitting next to one of the smartest girls back in my 5th grade Math class. She was extremely helpful whenever I missed out on information for the class. She would be able to provide me with notes or even willing to stay after school to study. This clearly shows boys from low income families may work better with girls and there may also be another reason for the behavioral problems and decrease in test scores.

In addition, Jennifer Medina states “A boy who has never been beaten by a girl on an Algebra test could have major problems having a female supervisor.” I would like to start off by saying that’s an absurd comment made by the author. There is no legit reason to believe that because i’m a boy that was simply beaten on an Algebra test I’ll have difficulty with a female supervisor. I’ve personally been dominated in comparison with girls who do really well on Algebra test but I have yet to allow that misachievement to get in the way of my friendships with girls.

In conclusion, I refuse to agree with Jennifer Medina while she argues for single sex classes. Since, she tells us there is no academic research to prove that single sex classes improve test scores and behavioral problems.

The last time I remember being seriously stereotyped, I was with my friend we were walking up 5th ave on a late night. From the distance I could clearly see walking in our direction was a family of 4. For some odd reason they crossed the street. As if they felt my friend and I were a threat to their safety. When in reality we all simply want to get home in the safest manner possible. I do understand they possibly believe people with my skin color do commit crimes at the time. But I still feel that not a reason to stereotype.

B6CD4226-1789-4BB5-B32B-7AA190845DEB  Downtown Harlem the neighborhood where I live and the blocks range from 111st to W 116 st. It’s examined as dangerous to the precinct. Over policing is pretty real for the Black people in my community and I live on 116 st it gets out of line with the Africans too. More specifically when the evening comes around that’s when undercover cops are patrolling in their cars. The neighborhood proved the critics correct once again somebody getting shot at this past Saturday after a party. I feel this incident was tied into a shooting late last year that in the ended with on my friends dead at the end of the night, but the people that killed him that night got away from the scene arrest free and my community is being over policed. You must believe me the dishes provided by the African reasturants on 116 st are filled with flavor. The restaurant I would recommend to anyone is called “Le Baobab”, and the dish I recommend is called Dibi and Loko.

Procrastination got real for me in my junior and senior years of Highschool. Only because my grades in specific classes were so bad due to procrastination. For college I plan to block any attempts of procrastination. That’s really how you set yourself up for failure.

I really like this Image due to the fact that it shows one of my favorite rappers reluctant to speak. I believe his reluctance comes from being tired of the spotlight at times. He’s been through so much at age 20. 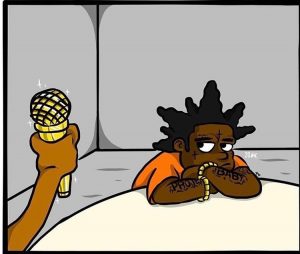