When I think of a place that matter to me I think of Santo Domingo, and that is because this is a place I wanted visit for a long time and last summer I went there with my family on a min vacation to explore a new place an see what they had out there. because he had so much fun and loved Santo Domingo we might go again. 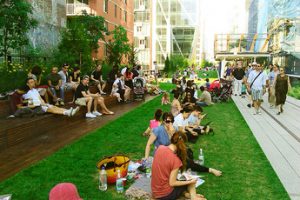 A place that matters to me is the high line park. A place where you can relax and feel comfortable is a place that is most likely to become your favorite place to go, for me the high line park is that place. The high line park used to be a railway, but since it was abandoned the railway was repurposed as an urban park. This park has sits where people can lay back and look at the sky, it also has a wonderful view of the street with a big glass window that allows you to look at the cars passing and take beautiful pictures, it also keeps the vibes of a railway by showing some of the train tracks through the green grass. Besides this park is beautiful the main reason because this place matter to me is because my best friends and I used to go there every Wednesday after school to chat and talk about our life and experiences becoming that place our favorite place. My friends and I shared very specials moments at the high line park and that’s why it is a place that matters to me. This is a place where you can appreciate the beauty of the world and also the beauty of life by looking around and noticing that every person that goes there is different and they all have a different purpose by going there, some to take pictures, others to relax etc… just like in life we all have a different purpose  and that’s what I want people to feel when they go to the high line park. 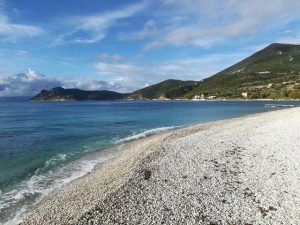 When I think of a place that matters to me I think of Greece. Almost every summer I go to Greece in order to visit my friends who I don’t see for a very long time. Every time I visit we go to the beach and enjoy the beautiful bright blue ocean with the sounds of the waves going back and fourth on the shore. Staying in Greece for at least two months makes me extreamely happy every single day until I have to go back to New York when then I feel miserable when that day arrives. My grandparents were also born in Greece and they have their own house on the island that i’m from which is Kalamos and I visit it them as well.

B6CD4226-1789-4BB5-B32B-7AA190845DEB  Downtown Harlem the neighborhood where I live and the blocks range from 111st to W 116 st. It’s examined as dangerous to the precinct. Over policing is pretty real for the Black people in my community and I live on 116 st it gets out of line with the Africans too. More specifically when the evening comes around that’s when undercover cops are patrolling in their cars. The neighborhood proved the critics correct once again somebody getting shot at this past Saturday after a party. I feel this incident was tied into a shooting late last year that in the ended with on my friends dead at the end of the night, but the people that killed him that night got away from the scene arrest free and my community is being over policed. You must believe me the dishes provided by the African reasturants on 116 st are filled with flavor. The restaurant I would recommend to anyone is called “Le Baobab”, and the dish I recommend is called Dibi and Loko.

Let me take you back to my city, lahore. second biggest city of Pakistan. People from there known as lahoris. They known for having big heart of hosting the guests, and enjoying their lives without stress, and its food streets being crowded all nights, such as biryani, kheer ,and other.

There is a famous saying in Punjabi ‘Jinay Lahore Nai Vekhya O ‘Jammya’ Nai (You have not been born till you have seen Lahore). because lahoris known for their foods, places (Lahore Fort, Shalimar Gardens, Lahore Museum, Badshahi Mosque, Quaid-e-Azam Library, Minar-e-Pakistan), culture/ tradition and festivals like basant- flying kites, independence day, religious days and many more. we have very traditional dress and different variety of cuisines.

check these links for more information

when i used to go to my aunty, i pass by middle road of Badshahi Mosque, and Minar e Pakistan. I have Badshahi mosque to my left side and the other side was Minar-e-pakistan. It is a crowded place, because a lot of people come to Minar-e-pakistan to visit it, next to it is a waterpark, people also visit it due to the hot temperature. There are a lot of transportions on the road to get you to this destination, such as a bus, car, taxi, cart and bull, motercyle, carrige, etc. It has a lovely weather, including some beautiful green areas, and from across it comes bakery shops, restuarent, and hotels, including fruit cart, and drink cart. The reason Minar-e-Pakistan is now known as a famous places is because of a law that was passed in that place, which confirmed that Pakistan will be a country and every year ton of people come and visit from different countries. This reminds us that Qaid-e-azam and his followers  were determined to make Pakistan a place by marching and giving their all. By writing all this I can hear the voice of Qaid-e-azam chanting “Pakistan Zindabad!” also known as Long Live Pakistan. All of this reminds of his dedication and hard work, and inspires me to respect him and work as hard as him to achieve something big just like him.

To the other side of Badshahi mosque, we have a food street, which is where most tourist go to eat the food, to see the ancient builiding and to explore more about the city and the culture. this Badshahi Mosque was created by Mugals, and the mosque was opened to all citizen who lived near it and that culture has been passed down through centuries and continues ’till today.

This shows the culture of lahore city famous phrase is lahore lahore aay  which is lahore is lahore ,if someone didnt saw this city that he was never born. that is because of love given by people, food, and beauty.

This video shows the culture of lahore city.

For this post (7-10 sentences), you’re going to tell us about a place that matters to you and post an image to go with it.  It could be your neighborhood, your room, a favorite place you like to go, another country…

Be sure to click on the Place Description category box in the right-hand Categories menu, the hit Publish.