Final grades for the course have been submitted to CUNYFirst, and a detailed breakdown of your grade (including your final exam score, your “Study Guide” project score, and so on) can be found on the GRADES page.

I wish you the very best in your future endeavors – it was a pleasure working with you this semester.

The inverse Laplace transform does exactly the opposite, it takes a function whose domain is in complex frequency and gives a function defined in the time domain.

The steps to using the Laplace and inverse Laplace transform with an initial value are as follows:

1) We need to know the transformations we have to apply, which are:

3)Then since we can’t find y(t) directly, we solve for Y(s), which is the Laplace transform of y(t)

4) Once we find Y(s), we may need to break up the equation into partial fraction form depending on the denominator. there must only be a single term in the denominator and no “s” in the numerator. (look at “Factor in Denominator” chart image attached)

5) We take the inverse Laplace transform to get y(t)

So now to apply those steps,

For another example, let’s take something that requires us to use partial fractions to get the right denominator.

So to get started on this one, we look at the Laplace transform table and see which fraction refers to the transformation. The first fraction looks like 1/(s-a) = e^(at). Although the “a” in this case would be a -2. For the second fraction, we got the same case except that the s is 3s, so all we have to do is factor out the 3, and apply the Laplace transform. And for the third fraction we see that it looks like, (n!)/s^(n+1) = t^n ; and since the exponent in the denominator is 5, the value for n = 4. But now we still have a 7 in the numerator whereas we need a 4! or 24. So to fix this all we have to do is multiply the top numerator by a constant to achieve the desired numerator, but we have to remember to divide by the same constant after taking the Laplace transform.

So it would be:

So, now we have to take the inverse Laplace transform.

I hope that the link to the video and images are helpful. 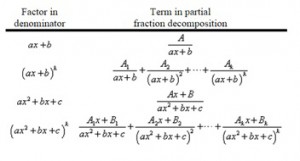 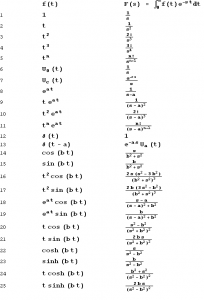 Improvements on the Euler Method (backwards Euler and Runge-Kutta)

Recalling that in Euler’s method, one approximates the point

from the slope of the previous point

. This yields the equation

, one takes the slope at the new point

. This yields the equation

for the backwards Euler method.

Much like the Improved Euler method, one tries to find a better fit for the definite integral of a curve. One uses the idea that a parabola would cover the most area under a curve (compared to a rectangle or trapezoid of other methods). From this idea, one found equations for the following points:

After answering the same question using both the backwards Euler method and Runge-Kutta method, one can see the accuracy of the results.

I’ve updated the answer to problem #14 – the correct answer is:

Step 1: Step 1 is it a differential equation? Yes, because its homogeneous and linear

Take the Laplace of the diff equation applied the initial value given :

Solve the linear equations : we would solve this by using elimination method:

Finally your function is in s domain:

1. Start with a differential equation

4.Take the inverse Laplace transform of the solution, this would be your solution for the differential equation, at this point you should be in the t domain with a simplify equation

L{f(t)}: The “L” is used to note that the function {f(t)} laplace transform is being applied.

As we proceed through the course, we are usually given a first-order differential equation that could be solved. However, there are a lot of problems that cannot be solved. The first order equations could be divided into the linear equation, separable equation, nonlinear equation, exact equation, homogeneous equation, Bernoulli equation, and non-homogeneous equations. However, most of the separable and exact equation cannot always be presented the solution in an explicit form. It’s hard to find the value for a particular point in the function. There are some of the equations that do not fall into any of the categories above. So we introduce the method called Euler’s Method. We will be able to use it to approximate the solutions to a differential equation. In the Euler method, we will be given a differential equation which is the slope of a function, and define a step size for the integral ( the smaller steps sizes you have, the more accurate approximation values you will be get ). We generate a new point by starting at an initial point, we plug in this point into the given function, this will be the slope of the initial point. Then, then next new point will be the

plus  step size h time the previously calculated slope. the general formula is,

However, the error for the Euler’s Method depends on the step size. the only way to decrease the error is to reduce the step size, but it will increase the amount of calculations. it only roughly decreases the error by half. 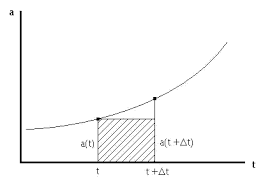 However, this approximate does not include the area that under the curve. To improve the approximation, we use the improved Euler’s method.The improved method, we use the average of the values at the initially given point and the new point. We define the integral with a trapezoid instead of a rectangle. The trapezoid has more area covered than the rectangle area. It will also provide a more accurate approximation. 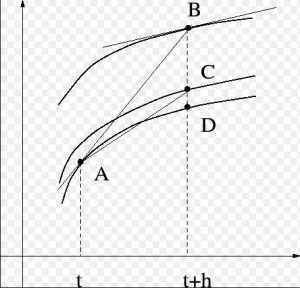 It is hard to predict the solution curve is concave up or concave down in reality. The ideal prediction line would exactly hit the curve at next predict point. The Euler’s Method generates the slope based on the initial point, and we don’t know if the next point will be on this slope line, unless we use a computer to plot the equation. Sometimes, we might overestimate the value or underestimate the value. The Improved Euler’s Method addressed these problems by finding the average of the slope based on the initial point and the slope of the new point, which will give an average point to estimate the value. It also decreases the errors that Euler’s Method would have. 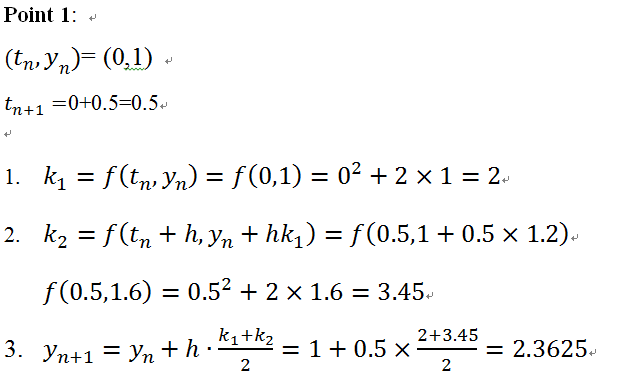 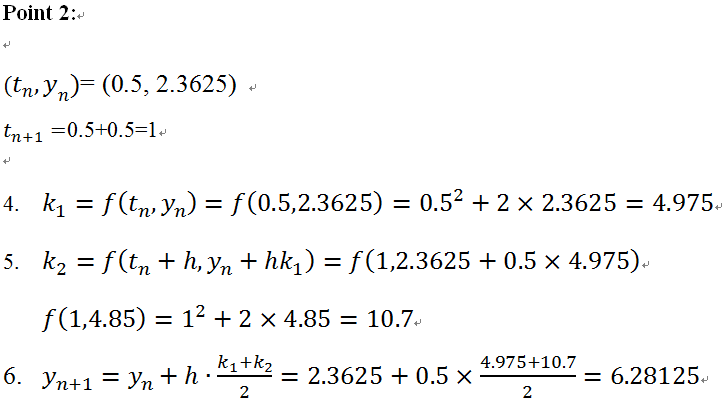 Note: it is very important to write the

I think this video is pretty helpful, and make a clear point on the improved Euler’s Method and a example include in the video. please check out this video.

for most of the problems. The basic idea to finding a series solution to a differential equation is to assume that we can write the solution as a power series in the form,
Y(x)= ∑_(n=0)^∞▒〖An (x-Xo)^n〗

and then try to determine what the an’s need to be. We will only be able to do this if the point x=x0, is an ordinary point. We will usually say that is a series solution around x=x0.

Suppose that   has a Taylor series about x=0

We start with the assumption that

Now substitute   and   into the differential equation

Now group together by powers of   :

Finally, we compare each term on the left with the corresponding term on the right – since the right side is zero, each of the expressions in the parentheses (which give the coefficients of the powers of  ) must also be equal to zero:

This gives us the coefficients to determine the first five terms of the Taylor Series, Remembering that Y(x) = a0+a1x+a2x2+a3x3+a4x4  +…. we substitute in the values of   to obtain

3. In case I wasn’t clear enough with the explanation or steps needed to solve the equation i will add a couple of video hopefully they help.

The grades for Exam 3 are posted on the Grades page (email me if you have forgotten the password).

This exam covered a great deal of material and, while overall grades were comparable to the first exam, I’m sure not everyone did as well as they would have liked.  You may improve your score on the exam by completing the Special Offer below.

Let me know if you have any questions, and best of luck with your studying!
Prof. Reitz

Exam 3 Special Offer – earn bonus points.  You can improve your grade on the exam, by doing the following:

Laplace transform is a method used to go from one domain to another domain. In this case we go from the time domain (t) to the frequency domain  (s).

As for most conversions, if there is one way to go from one unit to another, there should be a way to go backwards. It applies in this case also, although it isn’t necessarily a unit. In this case it’s simply called “Inverse Laplace Transform”. In this case we go from the Frequency domain (s), back to the time domain (t).

The notation for the Laplace transform is:

The “L” is used to denote Laplace transform. What is inside the curly braces is the function you want to transform from the time domain to the frequency domain.

You may sometimes also see this notation which means the same as the one before:

As for the Laplace transform, it is denoted:

This will give you F(s).

In order to get to the original time domain, you need to take the inverse Laplace transform of  F(s) which is:

Now that we got the notation down for the Laplace transform we can go into more depth.

The general formula for the Laplace transform where ‘t’ is greater than or equal to zero:

We evaluate at t is greater than or equal to zero because we want to satisfy two conditions:

1. The function f(t) has to be piecewise continuous from the interval [0,A]. Simply means a function that is broken apart into different pieces but still continues on. For example: 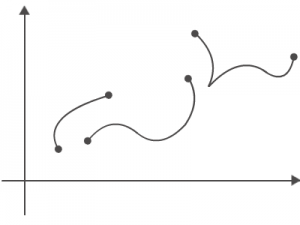 It simply mean to get the function f(t) you would need to take the inverse Laplace transform of F(s).

The main reason we use Laplace transform is because it makes certain (not all) differential equations easier.

1. Have a differential equation to solve

2. Take the Laplace transform of both sides in the equation. This will give you a simple algebraic equation to solve.

4. Simplify the algebraic so you have what you are solving for on the left side and what it is equal to on the right side. If you can simplify the right side it will make it easier. Once simplified use partial fractions to solve for the unknowns.

5. Take the inverse Laplace transform and you will have your solution for the differential equation.