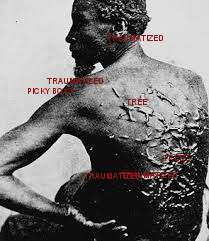 “And they took my milk.”

“They beat you and you was pregnant?”

bought them thataway, raised em thataway. Men every one

Schoolteacher had chastised that nephew,—

But now she’d gone wild, due to nephew who’d overbeat her and made her cut and run.

Y’ALL GOT BOYS, ‘HE TOLD THEM. ‘YOUNG BOYS, OLD BOYS, PICKY BOYS, STROPPIN BOYS. NOW AT SWEET HOME, MY NIGGERS IS MEN EVERY ONE OF EM

I told you to put her human characteristics on the left; her animal ones on the right

Them boys found out I told on em. Schoolteacher made one open up my back, and when it closed it made a tree

“We was talking ’bout a tree, Sethe.”

“After I left you, those boys came in there and took my milk.

I told Mrs.Garner on em. She had that lump and couldn’t speak but her eyes rolled out

“They used cowhide on you?”

“And they took my milk!”

TELLING HIM TO JUST THINK

It grows there still.

As I read the novel I kept asking myself what was the motivation for Sethe’s acts. This question kept popping up until the moment when Sethe was assaulted by the Schoolteacher’s nephews. Looking at the turn of events, there was nothing more significant than the fact that if Mr. Garner was alive Schoolteacher would not have been involved in the lives of the slaves; to push things in a very traumatic way for the slaves.

As much as Beloved is a bitter experience for the slaves, it “opened our eyes” to the consequence of slavery. It showed what slavery did to innocent people and their community as a whole. Indeed Beloved is really an eye opener; as it opened up a lot of questions that have long been unanswered or in some cases never asked; as it affords the opportunity to think about some critical questions that have never been thought of for a very long time.

On curating Beloved the black and red color signify sorrow and death. In this context it signifies the amount of sorrow Sethe and Sweet Home slaves experienced in the hands of Schoolteacher. The picture on display shows the scars that were on Sethe’s back after she was beaten by Schoolteacher’s nephews. The tree Sethe calls it signifies the amount of pain that grow with the scars on her back. It shows how much it traumatize her day in day, which eventually led her to kill her baby.

In class we read the novel Beloved by Toni Morrison. This novel deals with a runaway slave who commits infanticide and has to deal with the consequences of that as well as her traumatic past. The character’s name is Sethe. I chose the scene where Sethe has finally realized that Beloved is her daughter as one of the most important parts of the story to me. In part one of essay two I argued that had Sethe not realized that Beloved was her daughter the story would have been changed. The most important thing that would have changed was Sethe’s acceptance of the past and all that she has been through. She had everything bottled u on the inside and she believed that things in the past were unmentionable because they hurt too much when bought up. This video that I created shows what I believe Sethe feels as she realizes that Beloved is truly the Soul of her deceased daughter come back to life. She believes that her daughter has returned to her so that she can give her the childhood that she never had. I also created a picture of important words from the passage that I chose. In that image are all the words that make up this story of Sethe’s experiences through her life. In the ending credits I wrote a poem that I think describes Sethe as I have come to understand her. 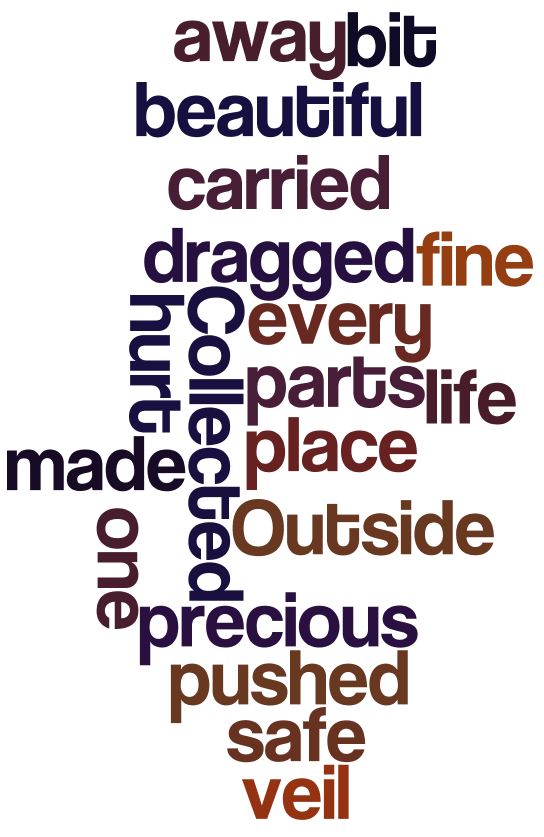 The quote that stood out to me the most in this book was ‘“And if she thought anything, it was No. No. Nono. Nonono. Simple. She just flew. Collected every bit of life she had made, all the parts of her that were precious and fine and beautiful, and carried, pushed, dragged them through the veil, out, away, over there where no one could hurt them. Over there. Outside this place, where they would be safe.”  This quote painted a huge picture in my mind of what this would look like if i was there with her. When I put the quote into Wordle and it selected these few it made the passage feel even more real by the way it selected these words.

The moment I chosen to write about for essay 2 was when Sethe kills her baby daughter. If she didn’t kill the baby, the story would probably be different. At least it will create fewer tragedies. What I’m trying to … Continue reading → 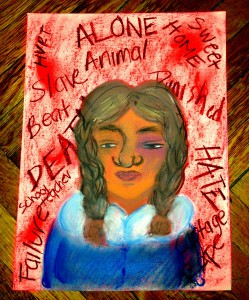 The section of the novel “Beloved,” by Toni Morrison that I chose was when Sethe meets Amy Denver. In my point of view, the story wouldn’t have continued or ended the way it did, because I feel that Sethe might not have survived or wouldn’t have had a successful getaway. This drawing represents my assumption of what would have happened if Sethe never came across Ms. Denver.  As a graphic designer, I chose to experiment with chalk.  I used red chalk in the background to represent blood, anger and death. On top of that layer, I chose words that would have stood out to me as the result of her not coming across Sethe’s path. I chose words like death, failure, animal, and alone because that’s what I felt represented the failure of a slave’s escape.  If you look closely at Sethe’s face, I chose to make her looking down, as a sign of shame. I also added a mixture of reds and purples in her skin to show the physical damage caused by people at Sweet Home. I chose the braids and the dress based on the way Sethe was represented in the clip that we were showed in class. 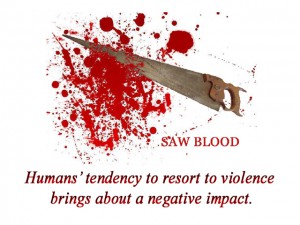 “Denver thought she understood the connection between her mother and Beloved: Sethe was trying to make up for the handsaw; Beloved was making her pay for it.”(Pg 131)

Know the consequences of resorting to violence ! 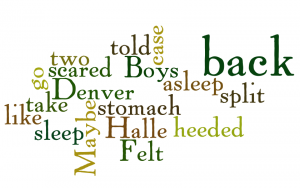 This is not a drawing or video, it is simply just words. But to me I feel that these words speak louder. The passage I chose explains when Sethe is talking about how she first tried to escape Sweet Home with her children. I used the site wordle.net to create this image in order for viewers to get a sense of how the passage I chose may look differently. I inserted the passage and then tried to find the right type of style that would make the words in the passage stand out to the viewer. I wanted to show ordinary text from a passage to be looked at differently. There were certain words to me that stood out when I read the passage and I wanted the viewer to see that as well with this image. The words that stood out the most in this image are “go” “maybe” and “case”. You can see how they are the only words that are vertical and a different color than the rest. Although they are just simply three words, to me I want the viewer to see them differently. Sethe maybe should have heeded the woman  or should go back to Sweet Home in case of Halle coming back. You can see how that these three simply words in a normal passage are now highlighted to give you a different perspective of the image. 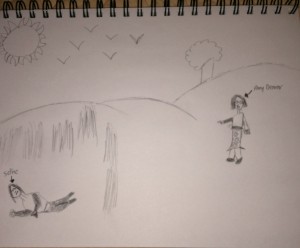 This moment is a very significant moment in the story. It is up to this point when the story can turn in two different directions. In one scenario Sethe after being spotted by Amy Denver, Amy can run back into the town and talk to cops or anyone she sees and notify them of what she seen. Once doing that Sethe can try to run more but won’t be make it too far because of her injured and due to the lack of water and food really gave her no energy to  continue.  She might either die or eventually get caught and taken back to where she escaped from. In the second scenario Amy Denver actually helps out Sethe and care of her. In the story she actually does help Sethe. She cares for her in a barn she found and helps her delivery Sethe’s baby who is actually named after Sethe.