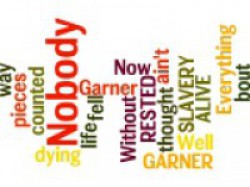 The passage I chose for Essay 2 as the moment most crucial to the story of Beloved by Toni Morrison was the death of Mr. Garner, and the coming of schoolteacher. This moment is important in the novel because if it would have not happened, our story would have had a different outcome, specifically, the main characters Paul D and Sethe would have not run away the way that they did in the novel. For the creative part of the assignment, I borrowed the idea of creating an image of the passage using Wordle.net, a website that allows you to create a word cloud with text that one would like to see in a different perspective. I thought this was interesting because the words are placed on the screen in a random order, with random font and color. This allowed me to be creative with the colors and the way the text was presented, the font the background and other interesting things that I was able to play with to make it look better. What I liked the most about using wordle, the way my text was generated and the way the image looks is that the words that stand out the most are in capital letters which are “slavery”, “rested”, “Garner”, and “alive.” These words are very strong and placing emphasis so that they can be seen better was very important.

Now she rolled the dough out with a wooden pin. “Anybody could smell me
long before he saw me. And when he saw me he’d see the drops of it on the front
of my dress. Nothing I could do about that. All I knew was I had to get my milk
to my baby girl. Nobody was going to nurse her like me. Nobody was going to get
it to her fast enough, or take it away when she had enough and didn’t know it.
Nobody knew that she couldn’t pass her air if you held her up on your shoulder,
only if she was lying on my knees. Nobody knew that but me and nobody had her
milk but me. I told that to the women in the wagon. Told them to put sugar
water in cloth to suck from so when I got there in a few days she wouldn’t have
forgot me. The milk would be there and I would be there with it.”
“Men don’t know nothing much,” said Paul D, tucking his pouch back into
his vest pocket, “but they do know a suckling can’t be away from its mother for
long.”
“Then they know what it’s like to send your children off when your
breasts are full.”
“We was talking ’bout a tree, Sethe.”
“After I left you, those boys came in there and took my milk.
That’s what they came in there for. Held me down and took it. I told Mrs.
Garner on em. She had that lump and couldn’t speak but her eyes rolled out
tears. Them boys found out I told on em. Schoolteacher made one open up my
back, and when it closed it made a tree. It grows there still.”
“They used cowhide on you?”
“And they took my milk.”
“They beat you and you was pregnant?”
“And they took my milk!”

Well, that’s the way it was. Nobody counted on Garner dying.
Nobody thought he could. How ’bout that? Everything rested on Garner
being alive. Without his life each of theirs fell to pieces. Now ain’t that
slavery or what is it? At the peak of his strength, taller than tall men, and
stronger than most, they clipped him, Paul D.
First his shotgun, then his thoughts, for schoolteacher didn’t take
advice from Negroes. The information they offered he called backtalk and
developed a variety of corrections (which he recorded in his notebook) to
reeducate them. He complained they ate too much, rested too much, talked too
much, which was certainly true compared to him, because schoolteacher ate
little, spoke less and rested not at all. Once he saw them playing–a pitching
game–and his look of deeply felt hurt was enough to make Paul D blink. He was
as hard on his pupils as he was on them–except for the corrections.
For years Paul D believed schoolteacher broke into children what Garner
had raised into men. And it was that that made them run off. Now, plagued by
the contents of his tobacco tin, he wondered how much difference there really
was between before schoolteacher and after. Garner called and announced them
men–but only on Sweet Home, and by his leave. Was he naming what he saw or
creating what he did not? That was the wonder of Sixo, and even Halle; it was
always clear to Paul D that those two were men whether Garner said so or not.
It troubled him that, concerning his own manhood, he could not satisfy himself
on that point. Oh, he did manly things, but was that Garner’s gift or his own
will? What would he have been anyway–before Sweet Home–without Garner? In
Sixo’s country, or his mother’s? Or, God help him, on the boat? Did a whiteman
saying it make it so? Suppose Garner woke up one morning and changed his mind?
Took the word away. Would they have run then? And if he didn’t, would the Pauls
have stayed there all their lives? Why did the brothers need the one whole
night to decide? To discuss whether they would join Sixo and Halle. Because
they had been isolated in a wonderful lie, dismissing Halle’s and Baby Suggs’
life before Sweet Home as bad luck. Ignorant of or amused by Sixo’s dark
stories. Protected and convinced they were special.
Never suspecting the problem of Alfred, Georgia; being so in love with
the look of the world, putting up with anything and everything, just to stay
alive in a place where a moon he had no right to was nevertheless there. Loving
small and in secret. His little love was a tree, of course, but not like
Brother–old, wide and beckoning.

The passage i chose for my essay is on page .

Pg.44
“Mr.Garner was dead and his wife had a lump in her neck the size of a sweet potato and unable to speak to anyone. She leaned as close to the fire as her pregnant belly allowed and told him, Paul D, the last of the Sweet Home men. There had been six of them who belonged to the farm, Sethe the only female. Mrs.Garner, crying like a baby, had sold his brother to pay off the debts that surfaced the minute she was widowed. Then Schoolteacher arrived to put things in order. But what he did broke three more Sweet Home men and punched the glittering iron out of Sethe’s eyes, leaving two open wells that did not reflect firelight.”