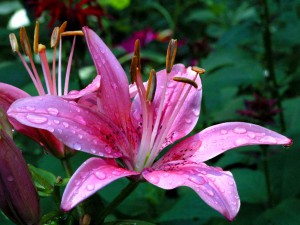 Beloved is one of the most powerful novel written by Tony Morrison . Every life has their ups and downs and thought that we live. That was the main idea of this story too. But the way she assembled all the scenes ,all the flash backs and retelling of their own story in the story maid it more power. Which raise the question in our mind that how can someone write something so sweet and bitter about life at the same time .How can some one blend pain with life and show that the people living that life are some how content with their lives

In our life different things occur and we wonder that what if that specific thing did not happened in our life,wouldn’t everything be different. The same way i think that what if something happened different in this story,how much would it change the story.The point from where Paul D comes in is from where the story starts to unfold.He makes the baby ghost disappear and make her appear physically. It seems that he was the one who really carried the story . What if Hally returned ,i guess it would have answered alot more questions and rise some too.

Stamp Paid looked at him. He was going to tell him about how restless Baby Suggs was that morning, how she had a listening way about her; how she kept looking down past the corn to the stream so much he looked too. In between ax swings, he watched where Baby was watching. Which is why they both missed it: they were looking the wrong way–toward water–and all the while it was coming down the road. Four. Riding close together, bunched-up like, and righteous. He was going to tell him that, because he thought it was important: why he and Baby Suggs both missed it. And about the party too, because that explained why nobody ran on ahead; why nobody sent a fleet-footed son to cut ‘cross a field soon as they saw the four horses in town hitched for watering while the riders asked questions. Not Ella, not John, not anybody ran down or to Bluestone Road, to say some new whitefolks with the Look just rode in. The righteous Look every Negro learned to recognize along with his ma’am’s tit. Like a flag hoisted, this righteousness telegraphed and announced the faggot, the whip, the fist, the lie, long before it went public. Nobody warned them, and he’d always believed it wasn’t the exhaustion from a long day’s gorging that dulled them, but some other thing–like, well, like meanness–that let them stand aside, or not pay attention, or tell themselves somebody else was probably bearing the news already to the house on Bluestone Road where a pretty woman had been living for almost a month. Young and deft with four children one of which she delivered herself the day before she got there and who now had the full benefit of Baby Suggs’ bounty and her big old heart. Maybe they just wanted to know if Baby really was special, blessed in some way they were not. He was going to tell him that, but Paul D was laughing, saying, “Uh uh. No way. A little semblance round the forehead maybe, but this ain’t her mouth.”

So Stamp Paid did not tell him how she flew, snatching up her children like a hawk on the wing; how her face beaked, how her hands worked like claws, how she collected them every which way: one on her shoulder, one under her arm, one by the hand, the other shouted forward into the woodshed filled with just sunlight and shavings now because there wasn’t any wood. The party had used it all, which is why he was chopping some. Nothing was in that shed, he knew, having been there early that morning. Nothing but sunlight.

Sunlight, shavings, a shovel. The ax he himself took out. Nothing else was in there except the shovel–and of course the saw.

“You forgetting I knew her before,” Paul D was saying. “Back in Kentucky. When she was a girl. I didn’t just make her acquaintance a few months ago. I been knowing her a long time. And I can tell you for sure: this ain’t her mouth. May look like it, but it ain’t.”

So Stamp Paid didn’t say it all. Instead he took a breath and leaned toward the mouth that was not hers and slowly read out the words Paul D couldn’t. And when he finished, Paul D said with a vigor fresher than the first time, “I’m sorry, Stamp. It’s a mistake somewhere ’cause that ain’t her mouth.”

Stamp looked into Paul D’s eyes and the sweet conviction in them almost made him wonder if it had happened at all, eighteen years ago, that while he and Baby Suggs were looking the wrong way, a pretty little slavegirl had recognized a hat, and split to the woodshed to kill her children.

After months of planning, hours of preparation, and weeks of promotion, the 2013 Literary Arts Festival proved to be an event that will be remembered and cherished by many. It was my first time volunteering for this event and it may not be my last. I enjoy the concept of the Literary Arts Festival because it gives students and staff a reason to be excited about literature, and it’s an outlet for great creativity. I have to applaud Damaris for winning the award for best short story, which also happened to be her Essay #1 for our class. This made me feel like our Intro To Fiction class was represented well. The festival had some touching moments that had me put many things into perspective. It’s a shame that I can’t remember the names of all those that received special honors, but based on the anecdotes expressed by their fellow workers I realized that it was indeed a labor of love by those who believed in it. .Along with being inspired by hearing all the award winning writers recite their pieces, and being entertained by the lively first performance of the City Tech band, I learned a lot about the history of this festival and those who made it possible for it to exist.I began to see and appreciate the festival for more than it is on the surface, although the surface is indeed very appealing. We had the privilege of hearing from Katie Dellamaggiore who directed the documentary “Brooklyn Castle”, Pobo Efekoro who appears in the film. This was my favorite part of the festival considering that these talents came to be in the same room with college students and faculty in Brooklyn to share their wisdom, stories, and relevant encouragement. There was so much to draw from this night of wonder and showcase of applied talents. Volunteering really made me feel like I became a part of history to have my name documented as a participant. I’m looking forward to being a part of the next one, which I honestly wish was happening tomorrow.

In a night filled with learning, laughter and music the 2013 Literary Arts Festival happened on Thursday April, 18 and it was a night that I will definitely remember for years to come. We got to hear some amazing pieces of literature that really were thought evoking.  I am very proud to say I knew two of the winners one from a previous class and the second is our classes own Damaris to her I would like to say congratulations. Her piece was thoughtful and really is something I would buy for my kindle. It was actually the story we had to re imagine for essay one in class. By far however the night was stolen by our guests of honor the director of “Brooklyn Castle” Katie Dellamaggiore and one of the students featured in the film Pobo Efekoro. We got to hear Ms Dellamaggorie’s thought process as she came across the students and how it rocketed into the wonderful movie/documentary it is today. However really and truly Mr. Efekoro stole the night with his clever innuendos and subtle wordplay he had us all captivated as he spun a tale about struggle and necessities. The realities of stopping and realizing that the little things in life truly mean the most. In his case it was his schools Chess Club a place where he could go and just fit in a place to just be himself. Without realizing it this young man at the tender age of 16 is a leader and mentor to a new generation of students who are now filling shoes he once walked in. He appears to be older than he looks and when he speaks it is with a wisdom that comes with time and experience. I learned so much and was so inspired that I for the entire night I wrote down lines and ideas for writing stories and poems. Inspiration was exuded in abundance from everyone there the atmosphere was lively and the people were amazing. At the end we got to mingle with professors and students, guests and friends just learning from each other and reflecting on what we had just experienced.

I’m having trouble accessing my dropbox account. I was able to open it yesterday when I signed up from my home computer. Now I’m trying to do it from one of the school computers and its telling me that there is no account under my email. HELP!?