The first ad, is from the Long Island Star newspaper, published on January 10th, 1822. The newspaper is from Brooklyn, NY, about an indentured boy between the ages of 11-12 named David Smith. Our first highlight was the description, “Indented colored boy.” We were confused on why they said indented, and later were informed that it might have been a slang term for “indentured.” The ad also made us wonder a lot on why it was posted in the first place. The Master doesn’t want the boy, and as a group, we came to an agreement that the only reason that he posted up the ad in the first place is the fact that the boy was not a slave, and was an indenture, a servant with a contract that will expire after a certain amount of years and will later be free, he might be responsible for any negative actions that David Smith did while he ran away. He was described as a “great rogue,” and that the master tried to give the papers to the boy’s father but he refused to accept them. That also raised the question, since the boy’s father is colored as well, is he free or not? and will that affect the outcome on the privilage of accepting those papers.

The second article we got was an ad from Louisiana Slave Pamphlet, from 1835. It was about a runaway, Henry, which was about 18 years old, and was described as “middle sized, swelled cheeks, silky locks, black skin, well built, and speaks English and French.” Last seen on April 27th, carrying a basket of vegetables at the market. And it was supposed that he had fled on a steam boat. There was a $100 reward on whomever found and returned him. We noticed this ad was a bit different from the first one because this one had an icon, had a reward and the boy was described in a lot more detail than the David was.

In the ad, the boy resembles the lost song (either Buglar or Howards) of Sethe in the novel “Beloved.” Because in the ad, it says a rogue boy weas lurking in Brooklyn and owner couldn’t handle him.
In “Runaway Slaves,” Louisvilla Journal has published about a runaway slaves profile detail that says, he might go to Nashville where his mother lives as a free person.

Comparing to the novel “Beloved” and “Runaway Slaves,” the mother mentioned in Runaway slaves resembles Baby Suggs and her son Halle. Because in the novel “Beloved” Halle was out of the seen most of the time and he really takes care of his mother. He may be sold and reached Alabama but scaped. In “Runaway Slaves” the newspaper ad mentioned that a man named Jim or Armstead ran away with a horse, probably he will run to his mother where his many acquintance lived. 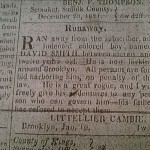 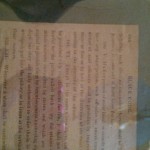 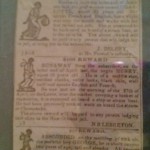 I enjoyed my visit to the Brooklyn Historical Society because we got to see the old maps and photos from the late 1800s and it was interesting to see how things have changed and stayed the same since then.

When I moved to Brooklyn a few years ago I instantly fell in love with it and wanted to learn more about the area. Brooklyn is rather large so getting to learn a little of its history was fun. I enjoyed the story “Only The Dead Know Brooklyn” because the “Big Guy” in the story is curious about Brooklyn just like I was when I first moved here and still am.

Sometimes I bike around Brooklyn with no real destination in mind and I feel like at the end of the story when the Big Guy speaks of “drowning” in Brooklyn he is referring to drowning in a river of curiosity because there is so much to see and learn about Brooklyn. I can relate to that feeling very well and I think I feel the same way The Big Guy feels toward Brooklyn.

At the Brooklyn Historical Society, I saw a map in 1874 and a photo in 1958. (for details, see below). Even though things may have changed as far as what they look like now, I think the division of the areas of Brooklyn are mostly the same as far as the map goes. In the photo you can see a real change with the train station being simpler and the all houses being lower. 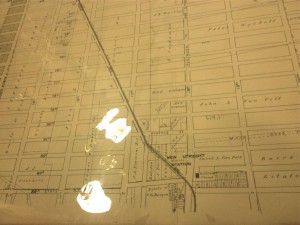 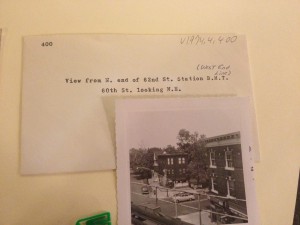 Visiting Brooklyn Historical Society (BHS) was a wonderful opportunity for me to know more about Brooklyn. BHS has rich collections from Brooklyn’s history including various maps and photographs. Looking at those maps and photographs, I could picture Brooklyn of century ago. The Atlas of New Utrecht, 1874 gave me some idea about the urbanization of Brooklyn. I could see some estates under the name of person and some estates under the name of development companies. As I understood, these development companies bought the farmer’s land and made it commercial by plotting the land and constructing buildings and apartments houses. After the map, I looked at a photograph of Coney Island Beach, which was taken in July 1958. Comparing today’s Coney Island with the photograph, I found a huge difference. I could see crowd of people enjoying at the beach, but there were no boardwalk and houses were just under construction. This means the Coney Island area was being prepared for commercialization.

This picture called “View of North side of 65th st showed me how Brooklyn might have looked like in the story of, “only the dead know Brooklyn” give me a visual perception of the setting of the story where he might of gone to. the picture shows buildings and cars parked infront of the buildings. Perhaps those buildings are still there to this very day if we go visit that place may look virtually unchanged maybe different cars and more modern things but essentially the same thing.

This is the first time i have ever visited or even heard of the Brooklyn historical society. it was an interesting experience, i did not know what to expect. it sounded like a secret organization like the freemasons but it had interesting things and amazing architecture and interior design. it was like going back in time to the 1800’s or early 1900’s. also this is the first time i learn about more places in brooklyn ive never really explored brookyn like that ive never been other places other than coney island and until now downtown brooklyn when i first started in city tech

On last class we visited the Brooklyn Historical Society. As far as first impressions go I was floored when we walked up to a gorgeous Red-stone building whose architecture spoke of a rich history that exemplifies what Brooklyn really is. As the enormous pocketed doors opened I got my first glance at a building so full of character that I swore it couldn’t get any better. I have never been so wrong before. We walked into the library archives and my jaw hit the floor. Imagine a library in the house of a lord where rich dark woods and soft lighting play of the binding of the thousands of books sitting nestled on the dark wooden shelves. As we got to work my definition of what Brooklyn is changed. For me Brooklyn today is just another place with buildings and homes just a regular part of New York.

I looked at a few different documents about Brooklyn’s history and I was floored. It’s been like this for so many years. I saw a picture of the BMT Train line looking onto the train line to the west from 16th avenue. Today this isthe line that the N Train runs on and has remained relatively unchanged. I can say that I went down this line several times and didn’t realize that it has been the same for so long. I also looked at a map of the train lines that were present in 1939 and there were a few lines that are still around and in use today. On this map I saw a picture of the Metropolitan Tower from 1939 and that has also remained relatively unchanged.

In thinking about the big guy from “Only the Dead Know Brooklyn” he tried to know Brooklyn by visiting as much of it as he could and experiencing it firsthand.  He had a map which showed basic directions and transportation routes similar to the ones we had. He chose to visit Bensonhurst which was easy enough to find on the map. I agree with the protagonist that Brooklyn is a place so enormous and vast in its diversity that it is not possible to know all of it.

I think I know Brooklyn a little bit better than I knew it before our visit to the Brooklyn Historical Society. I have come to appreciate some of the nuances that encompass the borough of Brooklyn. 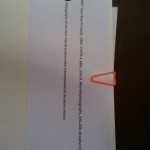 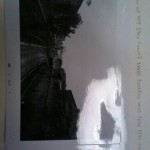