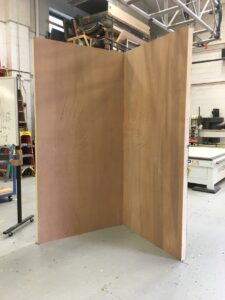 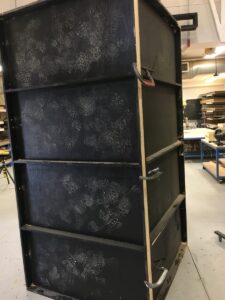 For this assignment it was a collaborative team project rather then a solo project which took over the course of 1 class day. The assignment was how to approach a load-in process .This was a way to see how our group could perform a load – in within the time frame of the class.

The  first objective  that my group did was to decide the tool list as well as make a plan that would be needed in order to load-in the platforms.One of the other objective was to go to the tool closet at least which means that our initial tool list had to be precised.

After words we did the following which was spiking the floor with a chalk line this allowed us to understand where the center and proscenium line would be placed. We were able to find the proscenium line and center line by

After the center and plaster line were found the next objective was to find the location of where the flats would be located and strike it.

This was done by

This process was done by using the tape measure and by locating the placement of the flats it was easy to find the other locations that where needed for the Flats.

Once all the strike points were found all that was needed to do was install the flats which was the easier part as we just had to screw them to the ground using a drill and some screws as well as using a wood clamp to hold them in place so it doesn’t stagger.

Over the course of the load-in lab their were some noticeable problems that occurred. And those problems were

To clarify the problem with the plan was that we didn’t have much of plan going into the project what we mostly did was face each issue the moment our group got to it.We solved this by taking a brief 1 minute break and deciding what is needed to do and agree as a team.

The second problem was the tool list not being specific enough. One of the other objectives for this lab was to not enter the tool closest more then one time which didn’t happen. In total we had a total of 2 trips to the tool closet. This occurred because one of the tools that we asked for which was the drill gun didn’t come with the battery or the screw drill bit that was needed. The solution for this was giving a specific list to professor McCullough during the second trip to the tool closet.

Lastly our last mistake which was a main reason that our team was behind was the straight lines for the center and plaster line. The reason being is that we where using the tape measure which is not needed to make a straight line during the creation of the plaster line. It was a step that added more work then it was needed. Our solution was to not use it when it was not needed except during marking the floor for the flats.

As for application for future uses what ill do is make an efficient plan and tool list for all future projects. This is what were my main take always from the lab. The reason being is that with an efficient plan it is easier to know what needs to be done at each step. The second application that is a take away from this lab was the need for a proper tool list. Going forward I will be specific with the tools are going to be put on the list. I would include specific part of a tool. For example

The reason being is that I can hand a list to someone who’s not experience and if I’m not specific they may end up just bringing back a drill gun without a battery or screw head bit. By being specific going forward it allows time to be saved.