For approaching the lighting elements for this project it is important to know what type of scenery would I be working with and that’s why it was important to come up with a set design so I can envision what type of lighting style I can implement onto a stage. For that reason its why I decided to do both a lighting and scenery element onto my project because I cant light what cant be seen.

One of the reasons that I also choose a lighting approach when it came down to this project was because as a lighting designer one of the main task and jobs is making sure that the show looks and feels right. With the play Medea the choices of color is important because it would allow me to see which scenes would use a specific color to enhance the emotions.

As exampled below I used Adobe Color picker which helped me take some of the main colors of my inspiration and I was able to cross-referenced does color with Rosco’s online library. 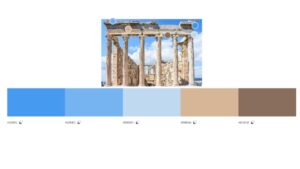 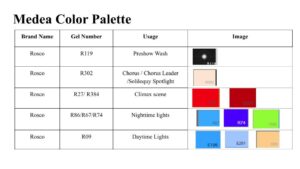 Another one of the important things that I had to do was was write up a lighting cue sheet as this would allow me to highlight what scenes would require a certain look or “specials”. That’s why one of the first things that I had to do was create a scenic breakdown . As this scenic breakdown gave more information regarding what is happening on set such as whos on stage, what they are doing etc.

Writing the lighting cues also helped me further my skills as a lighting designer as it allowed me to give a reasonable timing information for how long a certain cue should be as well as what type of fixtures will be used for that scene. This allowed me to focus on scenes that would have big impacts such as well as when those lights need to shift to a different look.

During this step one of the objectives that I had to tackle was what type of fixtures would I want to use for the show. Throughout this process some of the things that I had to look for when choosing a lighting fixture was the photometrics as well as candela that the lighting fixture would have when its being hung. This would allow me to have a rough idea of what sort beam the light would project onto the set. This allow me to further enhance my lighting design skills because it would allow me to memorize the specific numbers that each fixtures have in terms of calculating photometrics.

As this is a theoretical project meant to further hone my skills in lighting design one of the main aspects that I was able to get out of this lighting requirement list was the mathematical aspect of choosing a lighting fixture such as determining candela and photometrics. But it also helped me gain a broader view of what sort of fixtures I am able to use as well as what sort of reasoning I have behind choosing the fixtures.

One of the  main focus of this culmination project was the lighting plot because it is important to know where all the lights that I listed in my Lighting laundry list would be placed and what is the main purpose that those light would have for the play. This portion took some thinking as not only did I needed to decided on what light I wanted to use but I also needed a reason as to why this position would work.

As an example on Catwalk 2 I decided to hang several Source 4 Ellipsoidal 26 degrees. One of the reasons that I choose these lighting fixtures was because they could be a great placeholder for some gobos that I was thinking of using such as a tree template which throughout the play would change positions to differentiate the hours of the day such as morning, afternoon ,and evening.

Throughout the process I also had to do several photometrics / candela equations which helps when deciding what fixtures you want to use. Photometrics is mostly used to determine the width of the light beam, while candela helps determine how bright the beam of light would be.

And Throughout the process I was able to determine what fixtures will be needed and as well as what their locations will be throughout the venue of Voorhees theater.

This was a very back and forth aspect of this project as a simple change in lighting instruments would determine what the purpose of that fixture will be. This portion also overlapped with my magic sheet aspect as what I would change in the plot I would need to change on my magic sheet such as which units would be grouped together.

The next process was to determine what is needed in order to run  the entire show and this is what this portion mainly covers. Such as determining  how many lighting units will be needed, what type of cable will be needed and the varies other items as well. As well as taking into account how many extra items will be needed as a safety backup.

For this project the shop order revolved around the in house fixtures that are located in school. As well as working around what is feasible and what would need to change. An example would be the Clay Paky Alpha 700 as being listed in my shop order. That would something that would need to be rented out. However as a lighting designer one of the things that I take away from this exercise is working with what you got and making compromises. So if the moving lights that we have at school do the job that I need them to do which is a simple effect for the window and doors then I would use those moving lights  instead.

One of aspects that as a lighting designer was to create a magic sheet for the play such as knowing what lights would be used for different scenes. But not only that but also knowing the locations of the lighting fixture are. While creating the lighting plot is important its not all their is when it comes down to using them.

The magic sheet is a document that I would reference the most as it shows what position the light is located in a simple matter as well as what its main purpose is. When creating this sheet I had to look at the multiple documents that I made throughout the course such as The scenic breakdown, lighting requirement list, lighting cues , and lighting plot to determine which fixtures would be grouped together. 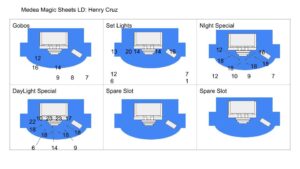 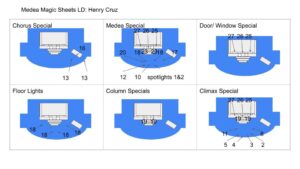