For this Project one of my approaches was looking at Greek architecture from different forms of media such as Textbook , video games, other stage designs from other plays. Research is the main aspect of my project as I wanted to design a set that would work for this play. Based on my research I decided to design my set around Greek Architecture.

Main source of Inspiration was to look up Greek Architecture from the way the houses were built back then. Such as finding out what materials go into building a house in ancient Greece but also looking at what goes into  building A temple or shrine. Not only that but also looking into the Greek staple the columns such as Ionic, Doric, and Corinthian. 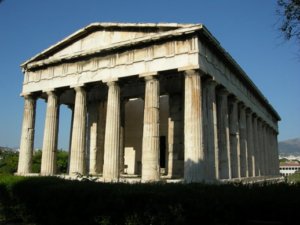 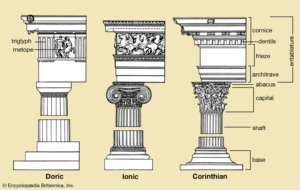 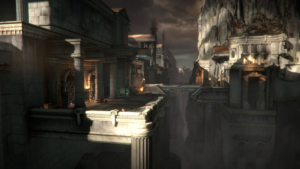 Another source of Inspiration came in the form of a video game that game being God Of War 3 which is set in Greece over the course of the franchise. The reason why I choose this game was because throughout the Franchise it takes elements of Greek Mythology and explores the various locations that are set in Greek mythology.

One of the very first things that I did before even deciding to create any concept art was to first read the Script. The reason being was because its important to understand what the scenes are looking like and what are any important items that need to be included. Reading the script also gave me a general idea in what part of Greece would the play take place in. And after reading the script came the most important task that I used throughout the semester which is research. Since I’m designing this set around Greece it was important to know what type of materials they used for houses or the type of molding that I want to use.

Once the research phase was done I moved onto designing the actual set which takes time as it required to know what type of space would I want this design to take place. Because of that I decided to use the Voorhees building as the venue location. The reason It was picked was because its an easy access location that I have a rough idea on what the space may or may not allowed access to. 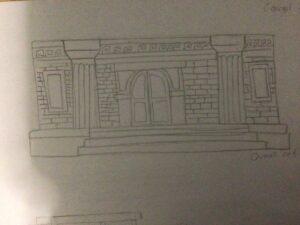 Over the course of this project the two main programs that I used where AutoCAD and Vector works for just the drafting portion. AutoCAD was mainly used to create the overall flats and other elements needed for the overall set. AutoCAD was also used to create a set of dimension needed in order to construct the varies flats that are located on the set. This would allow any carpenters to see what materials would be needed to what dimension would irregular flats would use such as the window and Door flats.

Vector works was mostly used to make a 3D model of the final set piece as it allowed me to customize the flats in a much open space. Vector works also allows me to scale the model into the Voorhees building which allow me to see if the dimensions of the overall scene was too small or too big.

One of the issues as well as a critique that my Advisor Professor Valderrama gave me was that the set was too small compared to the space that is Available in the Voorhees building. And after giving it a second look into it I do agree that the initial  plot was pretty small and that it could be increased in size just so it can look more presentable.

The reason why I made the set much bigger was when looking at Greek sets from varies other performances the sets always look big and after doing such research I decided to revamp the style in a much bigger style.

Initial design was pretty small and some of the aspect didn’t work well. Such as the first walls as they where only 8′ height and because of that the set looked very compact. 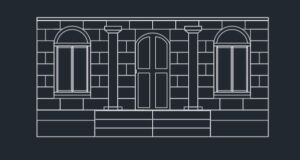 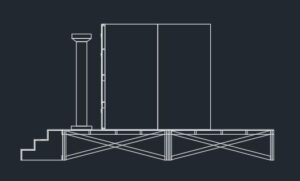 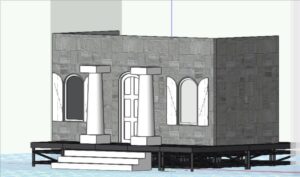 For the Final design Decided to go with A more traditionally design for the set by making the front of the space bigger. The reason being that Greek architecture is mainly big structures.  In the documents you can find the different drafting pages ranging from the platforms to the flats. 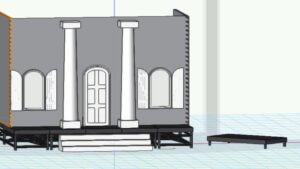 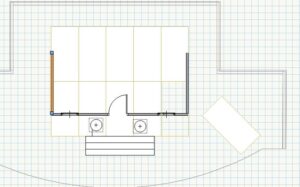 This aspect was the overall the final layout in which the flats should be assembled as well how it should look like once all the pieces are connected.

For overall flat style the flats that I wanted to use was the theatrical style flat. As they are easier to assemble as well as they don’t require too much material needed to construct. Not only that but they are easy to modify so that they can hold a window or a door.

When designing the stairs one of the things that I wanted to enhance my skills in was how to create a orthographic view. The stairs was one way in which I was able to better my drafting skills. As it allowed me to work on creating a 3d space. The stairs follow the same construct of a theatrical stair which uses riser and tread. This would be constructed with 3/4 plywood as that type of wood would be more structurally appropriate.

As for the Column was another one of those pieces in which I’m able to work on my orthographic construction. This portion was actually pretty tough as some of the issues that I had was constructing the top potion as it didn’t want to align with the base. The overall build of the columns would be made out of foam blocks as its not to heavy. And that it would be weighed down by a boom base.