Punnett Squares are convenient for predicting the outcome of monhybrid or dihybrid crosses. The expectation of two heterozygous parents is 3:1 in a single trait cross or 9:3:3:1 in a two-trait cross. Performing a three or four trait cross becomes very messy. In these instances, it is better to follow the rules of probability. Probability is the chance that and event will occur expressed as a fraction or percentage. In the case of a monohybrid cross, 3:1 ratio means that there is a 3/4 (0.75) chance of the dominant phenotype with a 1/4 (0.25) chance of a recessive phenotype. 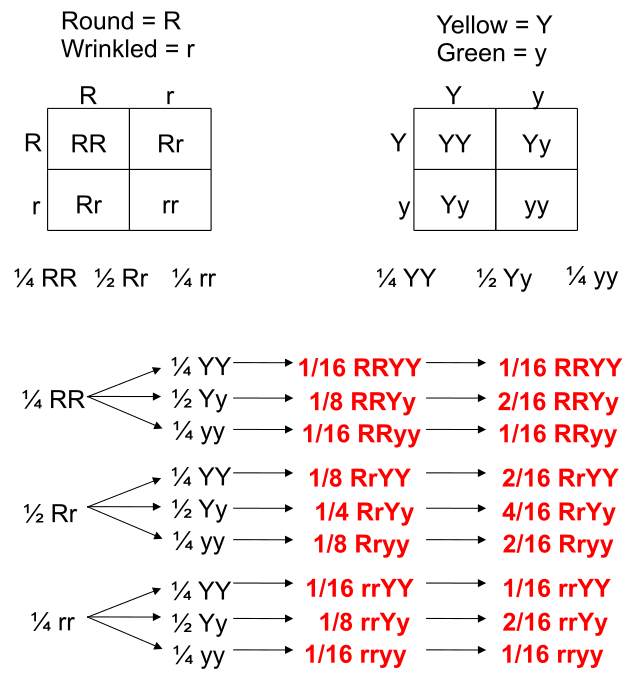 This forked line method of calculating probability of offspring with various genotypes and phenotypes can be scaled and applied to more characteristics.

Chromatography is a collective term for a set of analytical techniques used to separate mixtures. Chroma means color and graph means to write or draw. Paper chromatography is an analytical technique used to separate mixtures of chemicals (sometimes colored pigments) using a partitioning method. The paper in this method is called the stationary phase because it does not move and serves as a substrate or surface for the separation. Analytes (substances being analyzed) are separated from each other based on a differential affinity to a solvent. The solvent dissolves and carries the analytes along the matrix of the stationary phase. Since the solvent moves through a wicking action, it is called the mobile phase.

We’re all familiar with gelatin (like the Jello brand). Gummy candies are are made of gelatin. Gelatin is a protein that exists as long fibers. When gelatin is dissolved in a liquid and cooled, the gelatin fibers tangle together in a mesh-like network. The space in between the gelatin molecules is filled with the fluid it was dissolved in. Gummy candies are considerably more firm than the gelatin molds we have as desserts because they contain a lot less fluid. Nonetheless, gummy candies are filled with a sugary solution with coloring. Like a cell, a gummy candy placed in solution will be affected by the properties of osmosis when submerged in different solutions.

Hypothesized swelling of the bear based on tonicity

In 1665, Robert Hooke published Micrographia, a book that illustrated highly magnified items that included insects and plants. This book spurred on interest in the sciences to examine the microscopic world using lenses but is also notable for Hooke’s observations of cork where he used the word “cell” in a biological sense for the first time.

The father of Microbiology: van Leeuwenhoek

The Dutch tradesman Antonie van Leeuwenhoek used high power magnifying lenses to examine the parts of insects and to examine the quality of fabric in his drapery business. He began to experiment with pulling glass to generate lenses and developed a simple microscope to observe samples. Using a simple single lens with a specimen mounted on a point, he was able to identify the first microscopic “animalcules” (little animals) that will be later known as protozoa (original animals).

Though van Leeuwenhoek’s apparatus was simple, the magnifying power of his lenses and his curiosity enabled him to perform great scientific observations on the the microscopic world. He was ridiculed for fabricating his observations of protists at first. Ever the scientist, van Leeuwenhoek examined samples of his own diarrhea to discover Giardia intestinalis. While he did not make the connection of the causative nature of this microorganism, he described the details of the way this organism could propel itself through the medium in great detail.

Unlike van Leeuwenhoek’s single lens microscope, we now combine the magnifying power of multiple lenses in what is called a compound microscope. 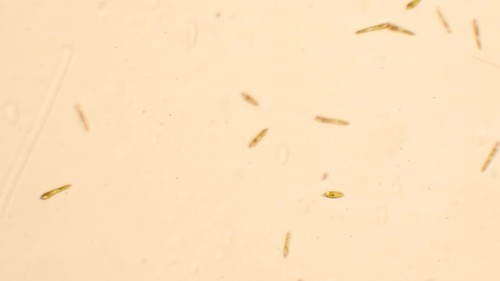