Energy is stored in the bonds of the carbohydrates. Breaking these bonds releases that energy. Crushing sugar crystals creates tiny electrical fields that give off invisible ultraviolet light. The wintergreen chemical (methyl salicylate) gets excited by these excited electrons and fluoresces in a visible blue wavelength. This phenomenon is called triboluminescence.

Glucose is the preferred carbohydrate of cells. Glycolysis (glyco – sugar; lysis – splitting) is a universal process of all cells that occurs in the cytosol whereby the glucose (a 6-carbon sugar) is split into two pyruvate (a 3-carbon molecule) molecules to generate ATP and reduced NADH. ATP (adenosine triphosphate) is the energy currency of the cell that stores chemical energy in 3 high energy phosphate bonds. NADH (reduced nicotinamide adenine dinucleotide) is a high energy electron carrier that acts as a coenzyme in reactions and as a rechargeable battery of sorts. The uncharged state that is not carrying high energy electrons is called NAD+.

In the absence of oxygen, cells may decide to utilize the pyruvate from glycolysis to rapidly generate additional ATP molecules in a process called fermentation. Fermentation is the anaerobic process of reducing pyruvate to generate ATP. This process uses the NADH generated from glycolysis as the reducing agents. Fermentation is a familiar process that occurs in yeast to generate ethanol. In other organisms, like humans, fermentation results in the production of lactic acid. Both lactic acid and ethanol are toxic, but this aids the cells in generating ATP when energy is required rapidly. Fermentation also generates CO2 as a waste molecule as pyruvate is broken down into a 2-carbon compound. 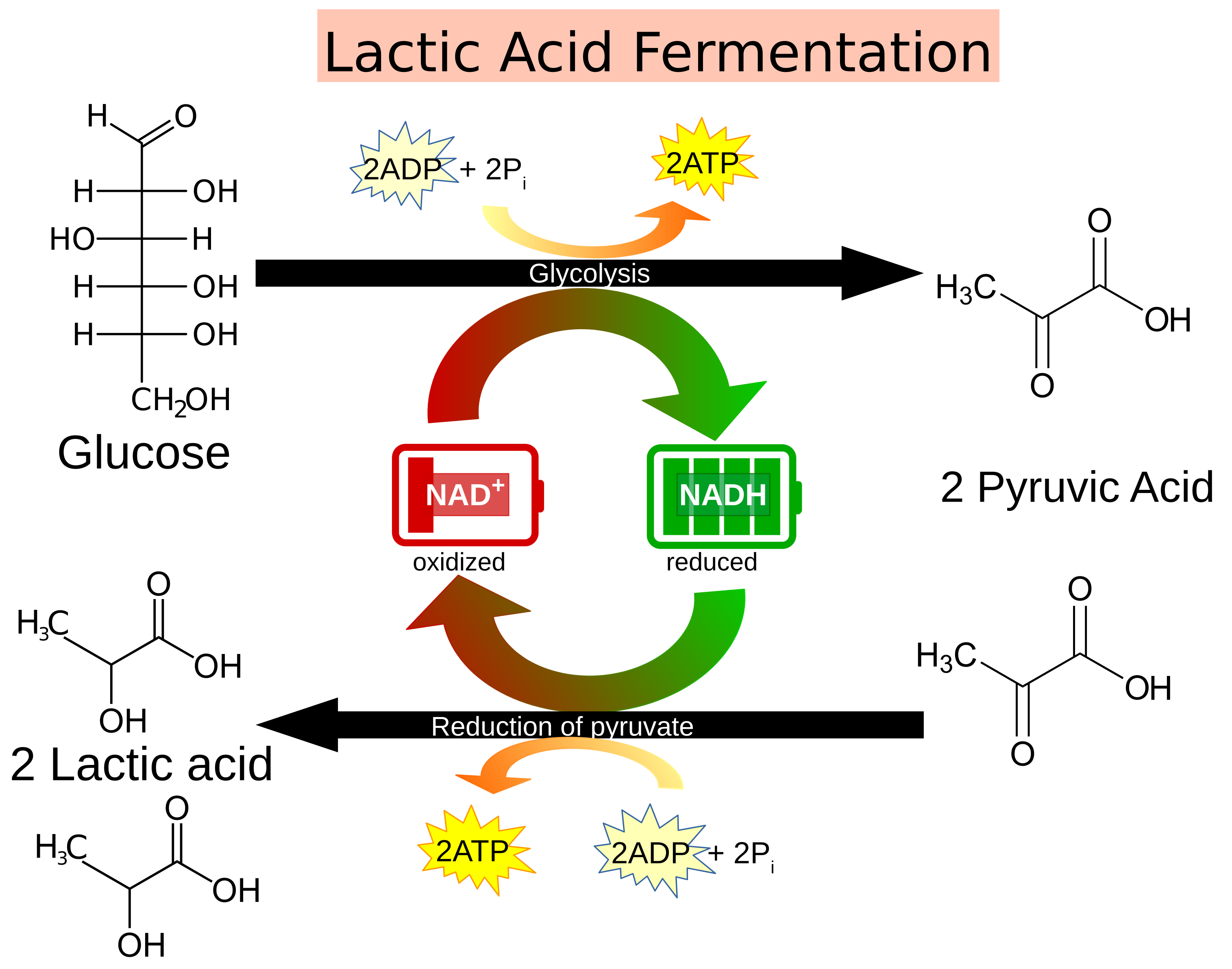 In the presence of O2, aerobic organisms will use a reaction of pyruvate decarboxylation in the cytosol. This reaction generates a molecule of Acetyl-CoA from the Coenzyme A which can enter the mitochondria.

When there is an excess of carbohydrates, the Acetyl-CoA is used as a starting point for long-term energy storage in lipid synthesis.

Mitochondria are the power station of eukaryotic cells. They are derived from a process described by the endosymbiotic theory whereby aerobic prokaryotes were engulfed by a protoeukaryote. In this mutualistic arrangement, the prokaryote detoxified the deadly O2 gas in the environment and used it to fully break down glucose to yield many ATP molecules. Evidence for this theory comes from the independent replication of the mitochondria, the bacterial-like mitochondrial DNA, the bacterial-like mitochondrial ribosomes, the bacterial lipids found in the inner membrane and the eukaryotic nature of the outer membrane. Mitochondria are genomically similar to bacteria of the order Rickettsiales.  Some bacteria of this order are still free-living  and some are intracellular pathogens.

Acetyl-CoA  enters the mitochondrial matrix where it is used in the Krebs Cycle (aka Tricarboxylic acid cycle (TCA), aka Citric acid cycle). For each pyruvate, there are 2 turns of the cycle where additional NADH and another high energy electron carrier FADH2 (flavin adenine dinucleotide) are generated. The electrons stored by NADH and FADH2 are transferred to  proteins called cytochromes that have metal centers for conducting these electrons. In the process of moving these electrons, the cytochromes in this Electron Transport Chains (ETC) power the movement of protons into the intermembrane space.  The terminus of these electrons is an O2 molecule that is reduced into 1/2 H2O molecules. This apparent movement of water molecules from the chemical synthesis is termed chemiosmosis. A channel in the membrane called ATP synthase acts as a gateway for the H+ back into the matrix, but use this motion to convert ADP into ATP.

The catabolic pathways involved in the glycolysis and the Krebs cycle constitute the metabolic pool that supplies building blocks for other anabolic reactions in the cell. An excess of carbohydrates can result in an accumulation of Acetyl-CoA molecules. If there is a great excess of Acetyl-CoA, the acetyl groups can be committed to fatty acid synthesis for long-term energy storage. Glycolytic products can also be the starting point for amino acid synthesis. 3-phosphoglycerate can be used to synthesize glycine, cysteine and serine. Pyruvate can be used to generate alanine, valine and leucine. Oxaloacetate from the Krebs cycle can be used as a starting point for aspartate, lysine, asparagine, methionine, threonine and isoleucine. Glutamate and glutamine are synthesized from α-ketoglutarate formed during the Krebs cycle. While most of the 20 amino acids can be synthesized de novo, there are 9 essential amino acids in humans that can not be synthesized in sufficient quantity and therefore must be gained from the diet. These essential amino acids include: histidine, isoleucine, leucine, lysine, methionine, phenylalanine, threonine, tryptophan and valine.