Thanksgivings is about getting together with your family and enjoy the food we cook. For this Image I have Chicken Stuffings with Cranberry Sauce along with Ham, Turkey Mashed Potatos and Ziti. 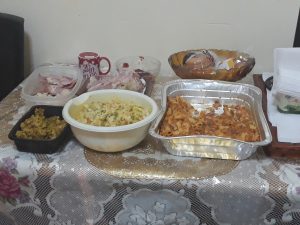 END_OF_DOCUMENT_TOKEN_TO_BE_REPLACED

After I read the article about the reconstruction of Notre Dame. I think that the church should be rebuilt with both modern and Gothic style. The Gothic style of the church dates back to so many centuries and the style is a part of France’s history and culture. because we are in modern times I think that modern style should also be incorporated into the church just to match the time period. Also, in addition to the reconstruction, to prevent future danger such as fires the building should be reconstructed with fireproof material. the main reason why the fire spread so quickly is because of the old material used in the church.

There was an immediate backlash against many of the ideas proposed for the Notre-Dame rebuild, especially with a modern touch and/or style. I, for one, think this is a great opportunity to link the past to the present. It is not rare in our history for structures to be damaged and have to be rebuilt which prompts someone to bring in the styles of the time. Some of the most interesting architecture in the world is a combination of multiple cultures and times coming together over the need to fix the damaged parts. There are certain designs that I would never stand for, such as Vizum Atelier’s “Lightweight Crown” which is a not only a hideous mismatch but just looks like a gaudy, glorified satellite tower that stretches up way too far, however I believe it is possible to implement certain aesthetics of the Gothic times and integrate them with modern technology and values. Take Vincent Callebaut’s “Biomimetic Forest”; with a few tweaks in the structural frame, the design could reflect a more harmonious reflection of the existing and well known architectural aesthetics while remaining a beautiful greenhouse exhibition. Even if the forest itself is seen as a distraction (which is understandable as a concern), I believe a touch of modernism would be an excellent addition, instead of holding on too tightly to the past when there’s still so much of it left in the remaining church. I do believe this harmony can be achieved with careful consideration and empathy towards the French people who see the cathedral as a symbol and want to respect the past.

After reading the article of the unexpected fire of Paris’s Cathedral of Notre Dame and the reconstruction of it created a debate over how it should be rebuilt. The controversial argument is whether it should be built in the gothic form church or a more modern version. In my opinion I believe that it should not be rebuilt in the same gothic style that was the original design. I say this because the original design is a classic art that can not be duplicated in my opinion. Even if they try to make a dupe of how it once looked it will not look entirely identical to the original due to the fact of material and other elements. Which concludes, my response to the debate is the church should be built in a more modern style.

After reading the article I believe that the Cathedral should be rebuilt to how it was, because this church has been around for 850 years and for it to lose it’s beauty from the fire is a tragic. If the people from French wanted to rebuilt the Important parts of the church, than it would be best for them to start a fundraising for the church and gather the materials they need that are fire proof. That way it would prevent the church from starting a fire again. While they’ll rebuilding they should discuss about Increasing the amount of security, because after seeing how wide the Cathedral is and the officer was at the wrong place when the fire began to spread. This way they’ll have an officer or two on certain places on the church and notify each other if there were to be an future incidents to occur.

A critically important example of Commodus’s cruelty is in the first part of the second paragraph, in where if the bath water for Commodus was deemed too cold, he would have the bath keeper burnt to the crisp in a furnace until he could smell the flesh of the aftermath. The stench of the burns was a confirmation that the punishment was commuted. The actions of Commodus were so cruel and evil, that he was placed for an assassination by Quatratus and Lucillas (His wife).  After the failure of the assassination, Commodus had Pompeianus and Quadratus executed, and Lucilla was exiled.

Commodus was a murderer and an evil individual, as for humorous purposes, he would torture people by dismembering limbs and plucking out people’s eyeballs. In one case, he let birds peck against a man’s head as his hair resembled worms to the birds. He cut a man’s stomach open to let his intestines out for complete fun. He would kill those for solely dressing as barbarians and those who looked noble and handsome. Commodus also named his male slaves after the private parts of the both sexes, and would often kiss them.  Commodus murdered many people and had a long reputation of being very evil and unjust.

The sculpture  displayed below is known as The Bust of Commodus as Hercules. Commodus was a Roman Emperor. Viewing this piece, symbolisms of power and authority is shown everywhere. The sculpture was designed to be precisely sculpted muscular to give off the illusion of masculinity. In the sculpture he holds a club in his right hand and some fruits in his left, while displayed wearing a headpiece resembling a lion. The head of the lion symbolizes him conquering power and respect while the club shown rested on his shoulder signifies the brutal torcher and pain he will bring when he reigns as  emperor. Based on the readings, I would describe Commodus as an evil, selfish corrupted person. In section 9 it stated that for sport he had cut open an obese person down the middle of his belly, so that his intestines would fall out. He slaughtered thousands of people for no reason, sacrificing people’s lives out of boredom. Commodus did all these cruel acts to show others that he was superior and unstoppable. Commodus was a disturbed destructive person. His behavior is distasteful and inappropriate, it is shown that was imbedded in him since he was a youth . Now I view the sculpture differently. All in all, Commodus led a life thriving on being destructive and destroy anyone who stood or question him .