I laughed when I saw the author of the New York Times article describe the outside line as “TSA style” because when I went to Paris this summer and saw the Louvre, that’s exactly what it looked like. I didn’t go inside because I wanted nothing to do with that enormous line and I had other things I wanted to see, however recalling that moment makes me agree with the author of the NYT article. If 80% of that line was just there to see the Mona Lisa, then that was really sad. Museums are meant to show more than one thing and if everyone’s flocking around only one painting it’s going to get extremely annoying. Of course people are leaving there unsatisfied; it’s like going shopping on Black Friday but all you’re getting is a not so good picture of an image that’s not much bigger than a letter sized sheet of paper. I think it’s necessary for the Louvre to put the Mona Lisa somewhere else. While I do understand it’s importance in art history, I don’t think its right for the art to monopolize the attention of visitors when there are so many other grand works of art in the same building. If people are going there out of obligation as opposed to understanding and appreciation, then you’ve missed the point of the art in general. 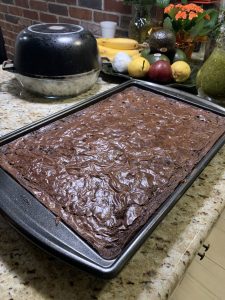 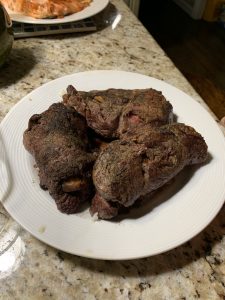 This was the first time I made brownies for Thanksgiving!! It was really fun and my little sisters helped. My father made sweet plantain and bacon-wrapped filet mignon. Apparently, he made this for his dad’s 50th birthday back in the 70s or 80s and this was his first time making the dish since, so that was really special to me.

There was an immediate backlash against many of the ideas proposed for the Notre-Dame rebuild, especially with a modern touch and/or style. I, for one, think this is a great opportunity to link the past to the present. It is not rare in our history for structures to be damaged and have to be rebuilt which prompts someone to bring in the styles of the time. Some of the most interesting architecture in the world is a combination of multiple cultures and times coming together over the need to fix the damaged parts. There are certain designs that I would never stand for, such as Vizum Atelier’s “Lightweight Crown” which is a not only a hideous mismatch but just looks like a gaudy, glorified satellite tower that stretches up way too far, however I believe it is possible to implement certain aesthetics of the Gothic times and integrate them with modern technology and values. Take Vincent Callebaut’s “Biomimetic Forest”; with a few tweaks in the structural frame, the design could reflect a more harmonious reflection of the existing and well known architectural aesthetics while remaining a beautiful greenhouse exhibition. Even if the forest itself is seen as a distraction (which is understandable as a concern), I believe a touch of modernism would be an excellent addition, instead of holding on too tightly to the past when there’s still so much of it left in the remaining church. I do believe this harmony can be achieved with careful consideration and empathy towards the French people who see the cathedral as a symbol and want to respect the past.

It was rather difficult to make it through most of the article, mainly because the things this man did was so unfathomably gruesome that I had to stop every now and then just to stomach what I had read. Is it the worst behavior I’ve ever seen? Probably not; I’ve seen similar displayed in movies and shows that aim to either reflect or exaggerate behaviors such as this one. However, there is something jarring about reading this as the behavior of an actual human being who lived as opposed to just watching some actor play out a character in Game of Thrones or Gladiator.

Vile is an accurate description, but the word that came to mind for me more often was deranged. It was said in class that he was not the worst of the emperors. That’s actually terrifying. There’s something exceedingly childish about his behavior; it’s as if someone gave a sociopathic 10-year-old all the power in the world and let him do what he pleased. The child has no conscious and only knows his selfish desires no matter how inhumane or insane. It says there was no respect for anyone no matter the ability or status, which means no matter who you were or what you did, you could easily be his next victim.