During my visit to the Chelsea district after passing over the Manhattan city streets while walking on the high line I visited the Aperture Foundation gallery. It was a photo exhibit that looked like a private gallery or very small museum and was mostly white walls but also different colored walls as well, one being yellow which was the wall that featured my favorite photograph. The walls all shined bright because of the lighting from the windows. After going up 4 flights in the elevator I exited and saw to my left was the reception desk or information/greeting desk, and to my right a hallway that included restrooms and led to another private room that didn’t seem like it was part of the gallery. The gallery is split into three different divisions, one being the lounge and educational area which is right by the greeting desk, the other areas both being photo galleries just divided by a wall which also had 3-4 photographs all in which were shot by Alex Webb, a photographer who shot all these fantastic photos in Mexico to describe and display the emotional connection and feelings of each photo with frames hun up o the walls as well as every other wall in the gallery sections. In the educational area which included the books I mentioned and also had a couch and two seats were the books were not only published by Aperture but can be purchased. One cool thing about Aperture is that they publish there own magazine every three to six months.

Alex Webb is a British photographer and displayed in the aperture gallery are photographs that he took year after year starting in 1970’s. In almost all of Alex’s photos he captures a moment in time but which also seems as though they were all very significant moments or decisive moments. As an observer or photographer you begin to see how he uses the elements of photography in a way which is either communicating a message of helplessness, hopelessness, fun, laughter, content, or even creative feelings and emotions. The photographs are different but some very similar. Most of the photographs expose the living conditions or hobbies in Mexico or at least those parts or Mexico maybe even during that time. 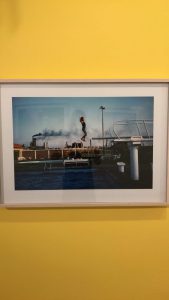 The photo that I love from the exhibit is Ciudad Madero, 1983 which shows a photo of a girl that looks between the ages of 7-12. She is jumping, not flipping or diving, but jumping backwards off of a diving board into a swimming pool. What speaks to me or what is so significant is that the photo seems as though it froze time. The lighting seems as if though a spotlight was put on the girl in broad daylight with the complement and contrast between the bright blue sky which features no clouds. The smoke from what looks to be an industrial factory in the background looks as though is is blowing a straight line towards the direction of the girl and the straight line from the side angle of the diving board which seems almost exactly aligned with the highest object in the city scape the girls facial expression doesn’t looked frightened or surprised, her expression shows relief or happiness as she has her arms in a 90 degree angle with her hands raised above her head in excitement or exhilaration. Her legs neither mangles but stiff, and her feet just falling below the line of the diving board to show she is falling from it  not unusually but freely.

This entry was posted in Homework, HW-Exhibit Review. Bookmark the permalink.