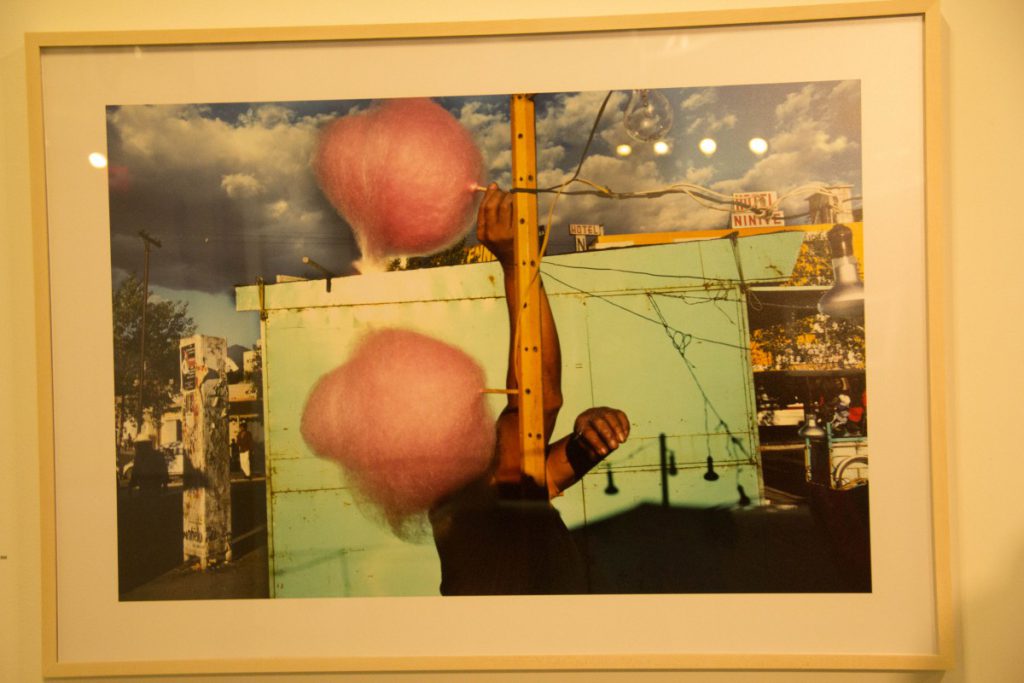 The tour at aperture of the Alex Webb exhibit titled “La Calle” was a wonderful experience, when you first exit from the elevator on the left side of the 4th floor there is a sitting area where you can look through books that aperture themselves have produced and on the right side is where the actual exhibit is located. When you get a tour of the exhibit you get a sense of a very fresh, clean and roomy atmosphere. In this exhibit there are many photos, 45 if I’m not mistaking that all have a common location that is Mexico. The exhibit is broken up into categories based on the color wall a photo is behind these colors are white, yellow and red. Based on my observation I would say the photos that feature bright light and visible color are placed behind a light colored wall like white and yellow. The photos that feature dark shadows and silhouettes are placed behind a dark color like the dark red or burgundy wall. The photos in this exhibition feature the lifestyle of the people in the streets of Mexico, they show emotion, humor and the conditions in which people live in. These series of photographs were taken between the mid- 70’s ending at the early 21st century (1975-2007). I feel this time range shows that Webb took his time at taking the right photos that perfectly present Mexico as well as the time he took into being involved with people featured in his photos.

In these photos you see children doing what children do like playing with a ball, playing with each other, being distracted from something and the most common showing emotion through facial expressions, these emotions range from confusion to aggravation. In addition, you see relationships being captured either it’s a relationship between parent to child, girlfriend to boyfriend, siblings or even friends. As with many photos they capture a moment in time that is very significant because it gets the viewer wondering what had happened before the photo was taken and right after. This in my opinion makes a photo that more memorable and its something that Alex Webb does well. He sets up moments in a photo were actions aren’t fully completed like he did with the photo taken in Tehuantepec, Oaxaca, 1985. In this moment you see a young boy spinning a ball on his finger, two children off to the side looking at something that is out of the frame, a basketball in the far back coming out of the hoop and another young boy getting in trouble by an other child maybe his sibling. When you look at a photo that has many things going on you can’t help but to wonder what’s going on.

This photo is Oaxaca, Mexico, 1990 and it features the scale in size between the cotton candy and the man in the red shirt, as well as the contrast of light and dark with the shadow that is being casted on the mint green structure. I can say that this photo shows the rule of thirds because the two cotton candies aren’t in the center; they are near one of the points of this grid. I love this photo because it shows the fun part of life for the people in Mexico, I can picture children running toward the cotton candy stand and having a good time. It makes me imagine the good and exciting things that happen in Mexico. I feel like the colors in the sky, cotton candy and structure pulls everything together to make a enjoyable photo.

Hi my name is Geneva, I'm a junior at the City Tech studying Advertising Design. Passion for designing and stylizing anything. Love doing hands on activities and I'm open to learning, experiencing and trying new things.
View all posts by Geneva Finklea →
This entry was posted in HW-Exhibit Review. Bookmark the permalink.