In a modern, globalized world, “Where are you from?” is a very common question to encounter. Oddly enough, I have remarked that when people ask it, they usually mean, “What is your ethnicity?” or “What are your roots?” rather than “What is your nationality?” or “Where were you born (and raised)?”

Because of this double meaning, some would answer, “I’m from here [America]” (which would often elicit a face-palm or a “no, that’s not what I meant”), but many would more readily respond, “I’m from Jamaica” or “I’m Mexican” or “I’m Italian,” even though they were all born and raised here, on U.S. soil; some have never even been to their respective “motherlands.”

Growing up, I had a hard time answering this question because I did not know the correct response. Am I Haitian? In terms of nationality, no, because I was born here. Am I American? Yes, but if you were to trace back my lineage, even by one generation, it would go right back to Haiti. Am I Haitian-American? That seems just about right, but isn’t that what you would call someone who has one Haitian parent and one American parent?

The irony is that, even if I identify as Haitian, if I were to go to Haiti right now, they would call me American without a second thought. Something would give me away–either my accent, mannerisms, or the way I dress. In fact, they would even call me a diaspora, which is a condescending term for someone who does not live in Haiti (even if he or she was born there) and comes to visit. You see, then, why such a simple question can be so complicated.

So what does it mean to be American? It’s not really in my jurisdiction to give a definitive answer, especially in light of the tension surrounding some of our president’s latest political decisions. Highlighting the trends that I have noticed, you are considered American here if (a) you were born here and live here; or if you are a descendant of (b) the original European settlers, (c) the indigenous pre-colonial peoples whom we call “Native Americans,” (d) the African slaves brought over during colonial times; or finally (e) if the generations before you have been here long enough and nothing else applies. (For the sake of argument, I distinguish this from the topic of American citizenship.) I am not saying that any of these are right or wrong answers, but that this is the general consensus I have gotten from listening to others discuss this topic.

So my question is this: why do so many of us seem to refrain from identifying as American, even if we fall into one or more of those categories? I can think of two possibilities. The first is ethnocentrism. For first generation Americans, the pressure to disdain American culture is usually externally imposed. Imagine, for example, a girl named Lola, whose parents were born and raised in the Dominican Republic. Lola was born and raised in the U.S. and does not speak Spanish fluently or know how to cook Dominican food. However, her relatives who were born in the D.R. brag about their experience and knowledge of their culture. They tease her for not knowing how to dance bachata at family gatherings. Whether deliberately or unwittingly, those relatives imply that they are the true Dominicans, while Lola is just a cheap imitation. Little by little, they paint her view of being American as inferior, bland, and boring.

The second possibility is a deliberate contempt for this nation and its heritage. The lack of patriotism is easy to find: people despise the greed infused in capitalism; the waste of food, water, and other natural resources; the hypocrisy of the government; and the brutal nature of its foundation, spearheaded by miscreants like Christopher Columbus. Looking at America from a distance, this land might be a beacon of hope and opportunity for some, but it is certainly an object of ridicule and mockery for others. Who would be eager to metaphorically wave their American flag under these conditions?

The irony is that, while this nation does have its undeniable injustices, so many people have come here seeking freedom, and then they use that very same freedom to deride the country that provides it. They have nothing but negative to say about America, yet they continue to attend its schools, take advantage of its welfare programs, and practice free enterprise. There are so many things people take for granted, so many laws and institutions and privileges here that are either fully corrupt or nonexistent in other countries.

Whether you wish to identify as American or not, I will say this: if you are here, make the most of it. No government is perfect, because governments consist of people, and people are not perfect. Embracing your American identity does not mean you sign off on everything our president is doing. It does not mean you are renouncing your family’s heritage, or that you stand for slavery, genocide, or other elements of this country’s dark past and present. Cynicism will only get you so far in life. “We the people of the United States” (as it says in the preamble of the U.S. Constitution) can truly affect change if we put our minds to it. A good place to start would be to reclaim our American spirit. 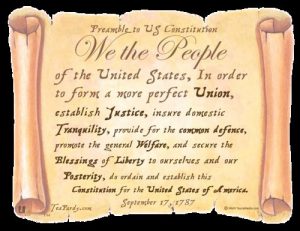 I had a blog planned for this week. I was going to tell you of my story and how I adjusted to my life being here in America but with everything happening now I don’t think my adjustment period is over. I think it’s just beginning. As a woman of color who came to this country searching for a permanent place of comfort and peace I find myself lost. I have so many questions, I am confused, hurt, angry, numb, and discouraged. I don’t know where I stand in a country which seems to stand against everything I am.

I say we don’t. I say we fight. I say we care for each other like we never have before. I say we use our words and craft to stop these radical changes. I say we educate our communities and sign every petition we can. I say we stand by one another. I say we love each other, support each other, and remind one another that together we stand. I say we speak for the rights of each other. I say we tweet, comment, share, and like positivity. I say we be Americans because to be an American once meant to be the best, to be a leader, to be accepting, helpful, and strong. Let’s be that! Let’s not adjust to a hateful country. Let’s accept and grieve this period of our history, but let it be just that; a day in history that did not break us.

I advocate to everyone feeling powerless by this change to speak up. To share your story because no matter what may change, our speech is still a freedom they can never take from us. Remember that I am here for you. I accept and love every single one of you and there is nothing that could change that. Until next Wednesday remember to be kind to each other! Unfortunately, many foods in America are questioned for their authenticity as there are simply are a variation of an authentic ingredient that is remade at a lower quality. Many readily used ingredients in America are not of the utmost quality which can effect the outcome of a recipe as well as the overall appearance and flavor of that particular dish. One of America’s favorite sweet tooth fix is … chocolate. While some label themselves as connoisseurs, others view themselves as chocoholics who are just strictly addicted to chocolate. But chocolate is one of the most famous treats in America while the quality is differing by way of the brand and the origin.

Chocolate should traditionally be made from the cacao bean which is then processed numerous times before becoming the molten creation that is chocolate. But America has found a way to somewhat cheat the process of chocolate making by only using cocoa butter solids which are a byproduct of chocolate that lowers the quality and flavor of the chocolate. Commercial brands like Nestle or Hershey are packed with sugar and the butter solids whereas those brands like Ghirardelli or Valrhona use the more extensive process that is necessary in making the best quality of chocolate. But the better brands are more expensive which leads many Americans to purchase a budget friendly chocolate despite it’s quality and flavor, it constitutes as a treat that will satisfy their craving. Yet, I feel that Americans are wasting their money if you pay less for low quality as well as a lower quantity of actual chocolate then it becomes a debate on whether it is worth the cost.

Essentially, it is important to read labels as it will help to guide you on the reality of the chocolate that you are planning to consume before wasting the money to purchase it. So the next time that you have a craving for chocolate, I encourage you to indulge but for the best chocolate tasting experience, I suggest that you check the labels and spend a little more for a better quality of chocolate. Good Luck and Happy Eating!