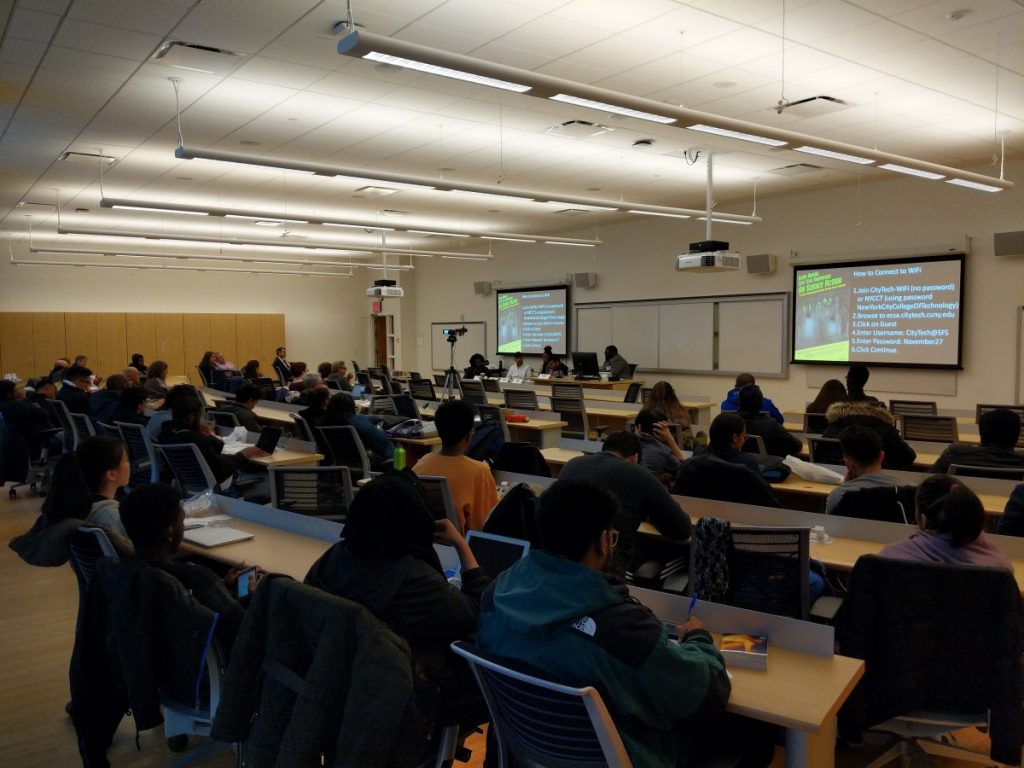 The Third Annual City Tech Science Fiction Symposium was an amazing success! Here are videos from the symposium’s presentations and discussions from Nov. 27, 2018. Watch them all on YouTube via this playlist, or watch them as embedded videos below.

9:20am-10:35am
Session 1: Affect and Experimentation
Location: Academic Complex A105
Moderator: Jason W. Ellis
Leigh Gold, “The Legacy of Frankenstein: Science, Mourning, and the Ethics of Experimentation”
Lucas Kwong, “The Island Of Dr. Moreau, Fantastic Ambivalence, and the Victorian “Science Of Religion”
Robert Lestón, “Between Intervals: A Soundscape for all Us Monsters” 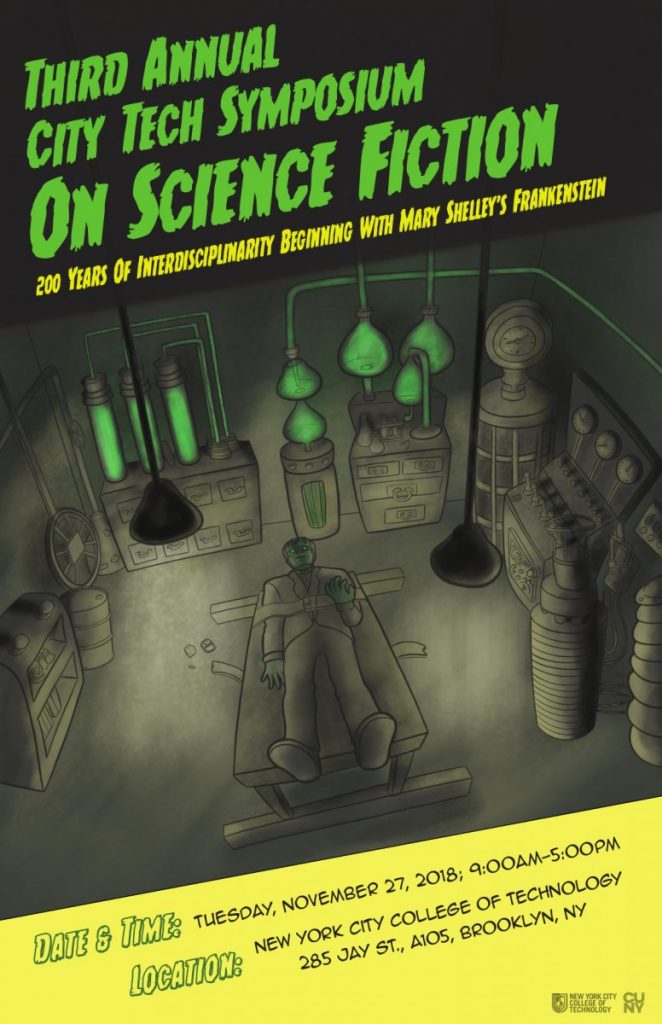 Hosted by the School of Arts and Sciences.

The kind of literature that came to be known as Science Fiction (SF) owes a tremendous debt to Mary Shelley’s Frankenstein, or The Modern Prometheus (1818). In addition to being an (if not the) inaugural work of SF, Mary Shelley builds her cautionary tale around interdisciplinary approaches to science, and she takes this innovation further by applying the humanities to question the nature of being in the world, the effects of science on society, and the ethical responsibilities of scientists. These are only some of Frankenstein’s groundbreaking insights, which as Brian Aldiss and David Wingrove observe in Trillion Year Spree (1986), “is marvellously good and inexhaustible in its interest” (20). The many dimensions of interdisciplinarity in Frankenstein and the SF that followed are the focus of the Third Annual City Tech Science Fiction Symposium.

9:20am-10:35am
Session 1: Affect and Experimentation
Location: Academic Complex A105
Moderator: Jason W. Ellis
Leigh Gold, “The Legacy of Frankenstein: Science, Mourning, and the Ethics of Experimentation”
Lucas Kwong, “The Island Of Dr. Moreau, Fantastic Ambivalence, and the Victorian “Science Of Religion”
Robert Lestón, “Between Intervals: A Soundscape for all Us Monsters”

Marleen S. Barr is known for her pioneering work in feminist science fiction and teaches English at the City University of New York. She has won the Science Fiction Research Association Pilgrim Award for lifetime achievement in science fiction criticism. Barr is the author of Alien to Femininity: Speculative Fiction and Feminist Theory, Lost in Space: Probing Feminist Science Fiction and Beyond, Feminist Fabulation: Space/Postmodern Fiction, and Genre Fission: A New Discourse Practice for Cultural Studies. Barr has edited many anthologies and co-edited the science fiction issue of PMLA. She is the author of the novels Oy Pioneer! and Oy Feminist Planets: A Fake Memoir. Her latest publication is When Trump Changed, the first single authored short story collection about Trump.

Jill Belli, Ph.D., is Associate Professor of English and Co-Director of the OpenLab, the college’s open-source digital platform for teaching, learning, and collaborating. Jill teaches and researches utopian studies and science fiction, and she serves on the Steering Committee and as the web developer for the Society for Utopian Studies. She is currently working on a book about happiness and well-being in education.

Julie Bradford designed the symposium’s Frankenstein-themed poster. She is a BFA in Communication Design Management student at City Tech who has a strong background in illustration. When she is not distracted by cute and shiny things or busy drawing up comic adventures with her Pokemon Go buddies, she is focused on her schoolwork and catching up on her shows. While completing her BFA, she is working as a graphic design intern for City Tech’s Faculty Commons. Her online portfolio is available here: www.behance.net/
juliebradf2a85.

Jason W. Ellis is an Assistant Professor of English at the New York City College of Technology, CUNY. He holds a Ph.D. in English from Kent State University, M.A. in Science Fiction Studies from the University of Liverpool, and B.S. in Science, Technology, and Culture from Georgia Tech. Recently, he co-edited a special issue of New American Notes Online (NANO) on Star Wars: The Force Awakens.

Leigh Dara Gold received her doctorate in German Literature in 2011 from New York University. She teaches Introduction to Poetry and English 1121 at New York City College of Technology, and Ancient Literature and Composition at Borough of Manhattan Community College. Her current research interests include science fiction’s role in the classroom, research on Ursula K. Le Guin, and connections between dance, literature, and philosophy.

Anastasia Klimchynskaya is a doctoral candidate at the University of Pennsylvania. She is currently working on a dissertation on the emergence of science fiction in the 19th century, which she situates in the context of earlier genres as well as the period’s discourses around scientific and technological novelty. Her other intellectual interests include the mechanisms through which science fiction becomes science fact, literature as political engagement, and the cultural history of AI. She is also on the organizing committee of the Philadelphia Science Fiction Conference (Philcon), and a peer reviewer for the Journal of Science Fiction.

Lucas Kwong is an assistant professor of English at New York City College of Technology, where he has recently served as the coordinator for the Literary Arts Festival Writing Competitions. His scholarship includes the article “Dracula’s Apologetics of Progress,” published in a 2016 issue of Victorian Literature and Culture, as well as a forthcoming article on H.P. Lovecraft’s “The Call of Cthulhu” for Journal of Narrative Theory. His current research project examines how late Victorian fantastic fiction reimagined the era’s fascination with religious difference. He also serves as the assistant editor for New American Notes Online (www.nanocrit.com) and City Tech Writer (openlab.citytech.cuny.edu/citytechwriter), a journal of student writing.

Robert Lestón’s research includes studies in the avant garde arts of sound, image, film, and continental philosophy as they apply to expanding the scope of rhetorical invention. His work has appeared in Itineration, Kairos, Configurations, Enculturation, Atlantic Journal of Communication, and other venues. He is also coauthor of Beyond the Blogosphere: Information and Its Children (2012) with Aaron Barlow.

Paul Levinson, PhD, is Professor of Communication & Media Studies at Fordham University in NYC. His science fiction novels include The Silk Code (winner of Locus Award for Best First Science Fiction Novel of 1999), Borrowed Tides (2001), The Consciousness Plague (2002), The Pixel Eye (2003), The Plot To Save Socrates (2006), Unburning Alexandria (2013), and Chronica (2014). His stories and novels have been nominated for Hugo, Nebula, Sturgeon, Edgar, Prometheus, and Audie Awards. His novelette “The Chronology Protection Case” was made into short movie, now on Amazon Prime. His nonfiction books, including The Soft Edge (1997), Digital McLuhan (1999), Realspace (2003), Cellphone (2004), New New Media (2009; 2nd edition, 2012), McLuhan in an Age of Social Media (2015), and Fake News in Real Context (2016), have been translated into twelve languages. He co-edited Touching the Face of the Cosmos: On the Intersection of Space Travel and Religion in 2016. He appears on CNN, MSNBC, Fox News, the Discovery Channel, National Geographic, the History Channel, NPR, and numerous TV and radio programs. His 1972 LP, Twice Upon a Rhyme, was re-issued in 2010. He was President of the Science Fiction and Fantasy Writers of America, 1998-2001. He reviews television in his InfiniteRegress.tv blog, and was listed in The Chronicle of Higher Education’s “Top 10 Academic Twitterers” in 2009.

Robert MacDougall is an Assistant Professor in Philosophy at City Tech.

Sharon Packer, MD is a physician and psychiatrist who is in private practice and is Assistant Clinical Professor at Icahn School of Medicine at Mt. Sinai. She is the author of several books that link science, psychiatry and the humanities, including Neuroscience in Science Fiction Film, Cinema’s Sinister Psychiatrists, Movies and the Modern Psyche, Superheroes & Superegos: the Minds behind the Masks; Dreams in Myth, Medicine & Movies. She edited two multi-volume books on Evil in American Popular Culture and Mental Illness in Popular Culture. She writes regular articles on “Why Psychiatrists are Physicians First” for Psychiatric Times.

A. Lavelle Porter is an Assistant Professor of English at New York City College of Technology. He holds a B.A. in history from Morehouse College and a Ph.D. in English from the CUNY Graduate Center. His writing has appeared in venues such as The GC Advocate, Callaloo, The New Inquiry, Poetry Foundation, and the African American Intellectual History Society. He is currently working on a book about representations of black higher education in popular culture.

Joy Sanchez-Taylor is an Associate Professor of English at LaGuardia Community College whose research specialty is science fiction and fantasy literature by authors of color. She has published articles in Science Fiction Studies, Extrapolation and The Journal of the Fantastic in the Arts. Currently, she is working on a book project titled Diverse Futures: Science Fiction, Fantasy, and Writers of Color.

Jeremy Seto is an Assistant Professor in Biological Sciences at City Tech.

Justin Vazquez-Poritz is the Dean of the School of Arts and Sciences at City Tech.

Complementary magazines donated by Analog Science Fiction and Fact. For more information about the magazine and subscriptions, visit www.analogsf.com.

Tremendous assistance from the Faculty Commons: Director Julia Jordan, Design Intern Julie Bradford, and the rest of the team.