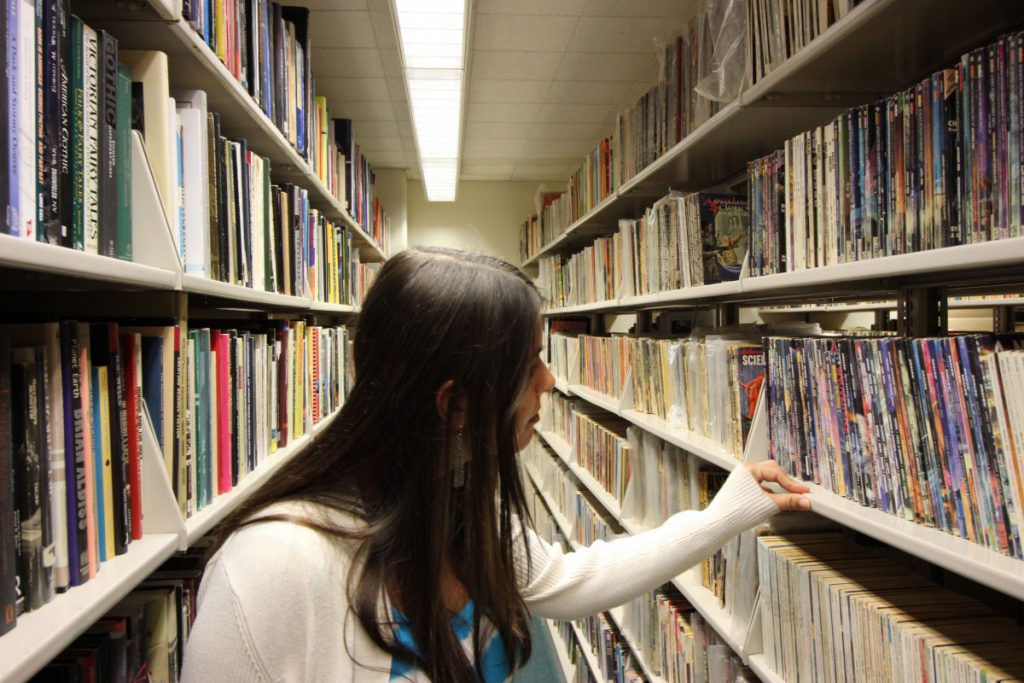 Prof. Jill Belli visited the City Tech Science Fiction Collection with Prof. Jason Ellis on Monday, August 22, 2016. Prof. Belli is teaching ENG 2420, Science Fiction this coming semester, Fall 2016. She is planning how to incorporate the collection and access to its materials into her Science Fiction class. 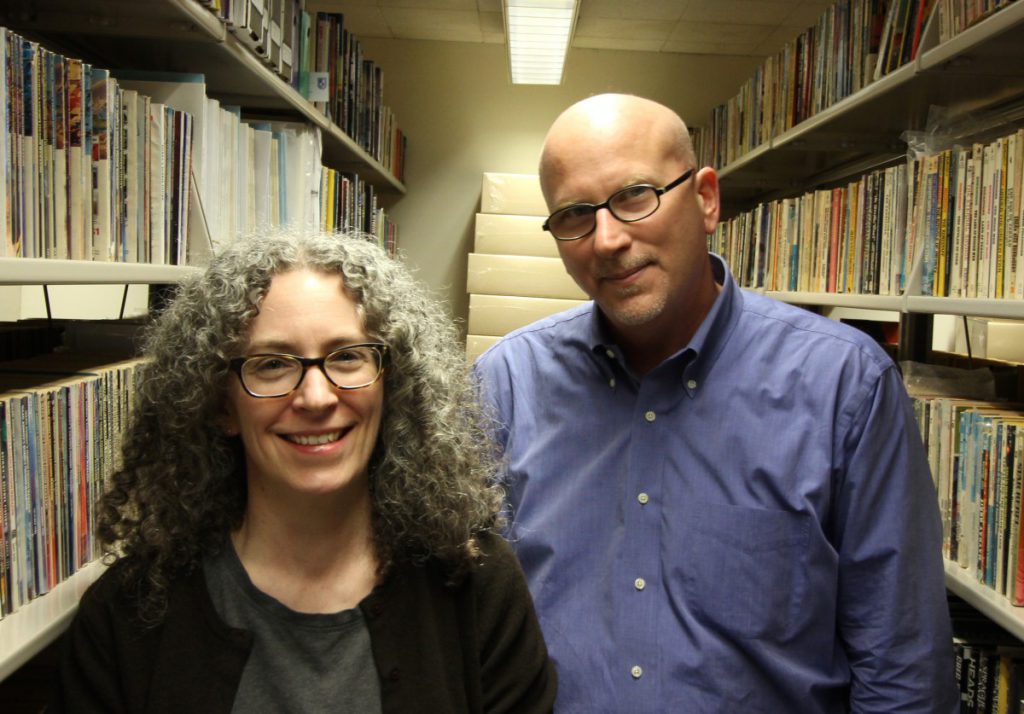 Prof. Jason Ellis met with Chief Librarian Maura Smale and College Archivist Keith Muchowski on August 16, 2016 to discuss the collection’s on-going inventory, protocols for class/student visits to use collection materials, and preservation materials, and coordinate on upcoming initiatives, including a symposium and library display exhibit. There are some exciting things in the works. More to come soon. Stay tuned! 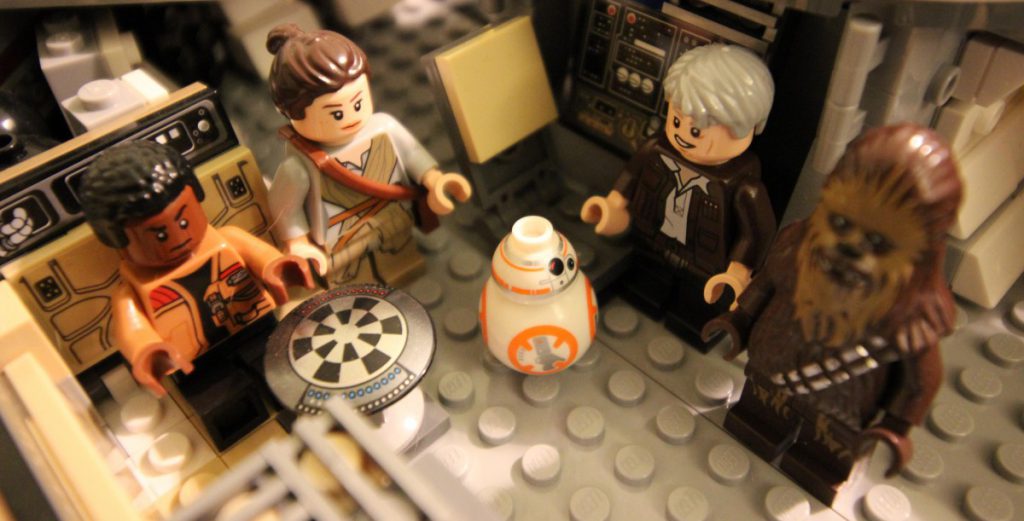 NANO New American Notes Online is an online, peer-reviewed journal edited by Prof. Sean Scanlan and supported by the New York City College of Technology, CUNY. Prof. Jason Ellis is on NANO’s editorial board. Together with their colleague Prof. Alan Lovegreen of Orange Coast College, they are co-editing an upcoming special issue focused on Star Wars: The Force Awakens. Their call for papers is included below and the original CFP is available on the NANO website.

This thing [Star Wars] communicates. It is in a language that is talking to young people today, and that’s marvelous.

–Joseph Campbell in conversation with Bill Moyers, The Power of Myth (1988)

There are certainly many more themes in The Force Awakens that speak to us, and help us to learn more about these characters and what makes them tick.

It is the aim of this special issue of NANO to address the significance of the latest installment of Star Wars by exploring its narrative, characters, media, and event. Across nearly four decades, audiences spanning generations have experienced Star Wars through films, television programs, books, video games, special events such as the annual “celebrations,” and other storytelling media, including action figures and LEGO. Following Disney’s acquisition of Lucasfilm, George Lucas’ production company, audiences experienced a new transmedia event and a continuation of the old stories with the release of Star Wars Episode VII: The Force Awakens in 2015. Joseph Campbell’s earlier observations about the first film raises new questions that deserve to be answered about the latest: How does this new film communicate? What language does it use? And, to whom is it speaking?

One way to approach these issues of communication and language is through the convergence of the film’s narrative and characters, especially how the transmission of this convergence gets revealed through a variety of media as an event. For example, how does the film’s narrative respond to, continue, and challenge those that it follows? And what about the cast of characters—some returning and some new? What do these characters and their performance of the narrative have to say about the here-and-now as well as the past? Of course, the narrative is told through media, which includes different film technologies, digital distribution, DVD and Blu-Ray discs, websites, video games, and apps. And stepping back for a larger perspective, the release of the film and its transmedia supporting elements inform The Force Awakens as an event, in part orchestrated by Disney/Lucasfilm, and in part connected to contemporary events, including #oscarssowhite, #womeninfilm, and #paygap. Furthermore, how does its event(s) relate to those of the past, including specifically those centered on the release of the earlier films and subsequent events awakening fans’ nostalgic enthusiasm. The Force Awakens’ considerable box office performance and tie-in successes signal how significant this film (and its progenitors) is, and it is the aim of this special issue to explore the promise and pitfalls of its cultural influence.

This issue welcomes multimodal essays up to 4,000 words (excluding works cited) exploring topics relating to Star Wars: The Force Awakens, including but not limited to the following:

* materiality and The Force Awakens (e.g., LEGO, play, and collecting)

* social and political movements’ coinciding/connecting with The Force Awakens

* the hero’s journey and the heroes’ journeys

* race and gender in The Force Awakens

NANO is a multimodal journal. Therefore, we encourage submissions that include images, sound, or video in support of a written argument. These multimodal components may consist of objects and data sets that go beyond traditional media. The multimodal components of the essay must be owned or licensed by the author, come from the public domain, or fall within reasonable fair use (see Stanford University Libraries’ Copyright & Fair Use site, http://fairuse.stanford.edu/overview/fair-use/ and the U.S. Copyright Office’s Fair Use site, http://www.copyright.gov/fls/fl102.html for more information. NANO’s Fair Use Statement is available on its submission page, http://www.nanocrit.com/submissions-information/).

Keywords and abstract: Each author is asked to submit 5 keywords and a 150-word abstract to accompany their submission.

Schedule: Deadlines concerning the special issue to be published in NANO:

We look forward to receiving your contributions.