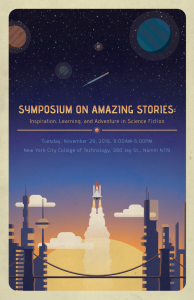 Everyone is invited to the Symposium on Amazing Stories: Inspiration, Learning, and Adventure in Science Fiction. Join us on Tuesday, Nov. 29 from 9:00am-5:00pm in Namm 119 (City Tech, 300 Jay St., Brooklyn) for a symposium exploring SF as a medium for engaging imagination, a means for exploring STEM/STEAM fields, and an instrument for discovering interdisciplinary connections, and also celebrating the new City Tech Science Fiction Collection held in the Archives and Special Collections of the Ursula C. Schwerin Library. The tentative schedule is included below (the final program will be posted as soon as possible).

Justin Vazquez-Poritz, Dean of the School of Arts and Sciences, New York City College of Technology

Johannah Rodgers, New York City College of Technology, “Todorov and the Incredible Hulk, or Exploring the Roles and Definitions of Fiction Across the Disciplines”

Stephen Chambers, Winthrop Group, “Reading the Future to Bring the Past into the Present: Why Science Fiction Makes Better Historians”

A. Lavelle Porter, New York City College of Technology, “Samuel Delany’s The Motion of Light in Water and SF Publishing”

Session 4: Science Fiction in and beyond the Classrooms: A Student Roundtable

Location: Enter the library on the fourth floor of the Atrium Building, walk up to the fifth floor inside the library, walk to the left past the stacks, and turn left again.

Marleen S. Barr is known for her pioneering work in feminist science fiction and teaches English at the City University of New York. She has won the Science Fiction Research Association Pilgrim Award for lifetime achievement in science fiction criticism. Barr is the author of Alien to Femininity: Speculative Fiction and Feminist Theory, Lost in Space: Probing Feminist Science Fiction and Beyond, Feminist Fabulation: Space/Postmodern Fiction, and Genre Fission: A New Discourse Practice for Cultural Studies. Barr has edited many anthologies and co-edited the science fiction issue of PMLA. She is the author of the novels Oy Pioneer! and Oy Feminist Planets: A Fake Memoir.

Jill Belli, Ph.D., is Assistant Professor of English and Co-Director of the OpenLab, the college’s open-source digital platform for teaching, learning, and collaborating. Jill is active in utopian studies and science fiction, and she regularly designs/teaches courses, presents at conferences, and produces scholarship in these areas. She is collaborating on a digital science fiction project, the Futures Past Archive, and serves on the Steering Committee, the Teaching Committee, and as the web developer for the Society for Utopian Studies. She is also a founding member and developer of the Writing Studies Tree, an online, open-access, interactive academic genealogy for the field of writing studies. Her interdisciplinary research centers on utopian studies, positive psychology/happiness studies, writing studies, digital humanities, and education/pedagogy, and her current book project, Pedagogies of Happiness, explores their intersections.

Stephen Chambers is the author of works of science fiction and fantasy such as Jane and the Raven King (Sourcebooks, 2010), as well as business and history, including most recently No God But Gain: The Untold Story of Cuban Slavery, the Monroe Doctrine, and the Making of the United States (New York: Verso Books, 2015). He is a senior consultant and the deputy manager of the History Division at the Winthrop Group.

Jason W. Ellis is an Assistant Professor of English at the New York City College of Technology, and a former Marion L. Brittain Fellow of Georgia Tech. He coedited The Postnational Fantasy: Postcolonialism, Cosmopolitics and Science Fiction (Jefferson, NC: McFarland, 2011). His research interests include science fiction, digital technology, and LEGO.

Leigh Dara Gold received her doctorate in German Literature in 2011 from New York University. Since then, she has been teaching English at CUNY colleges and History at New Jersey City University. Some of her research interests include the interconnections between dance and literature, science fiction and sadism, and the question of intimacy in poetry.

Amanda Lerner is a fifth-year PhD candidate in the department of Slavic Languages and Literatures at Yale University. She specializes in science fiction as both a genre and a mode. Her dissertation, tentatively titled “In Dialogue with The Future: Time Travel in Soviet and Post-Soviet Russian Fiction,” focuses on how a traditionally generic device, such as time travel, can complicate and supercede the generic distinction of ‘science fiction.’ Her research interests also include Balkan/Yugoslav literature, (re)identification of the formation of nationhood in the post-Yugoslav context, the interplay between American and Soviet science fiction, and dystopian literature as reimagination and recontextualization of the present.

Alan Lovegreen’s research covers intersections of literature and technoculture in the nineteenth and twentieth centuries, with a focus on aerofuturism in discourses of race, posthumanism, the built environment, and ecological futures. He has published essays in Criticism: A Quarterly for Literature and the Arts, Paradoxa: Studies in World Literary Genres, La Torre di Babele: Rivista di Letteratura e Linguistica, The Eaton Journal of Archival Research in Science Fiction, and The Steinbeck Review. He is currently working on an edited anthology of aerial fiction.  Alan teaches at Orange Coast College, having formerly taught at New York City College of Technology.

Daniel Phelps is an integrated media artist and filmmaker in New York City. His work consists of various forms of non-fiction media specializing in the use of hi-technology for digital storytelling. His linear work has been seen on NBC Sports, The Tennis Channel, and cable networks across the country. More recently, his feature-length documentary, The Domino Effect, advocates for fair housing and informed urban planning in New York City. Daniel holds a B.A. in Mass Media Communication from The California State University Sacramento as well as a M.F.A. in Integrated Media Arts from Hunter College. Through grant funding, he participated in the 2015 and 2016 Robotic Mining Competitions and the NASA Swarmathon. His current focus of research consists of the use of drones, robotics, virtual reality and other forms of digital fabrication as commercial and artistic tools.
A. Lavelle Porter is an Assistant Professor of English at City Tech. He holds a B.A. in history from Morehouse College and a Ph.D. in English from the CUNY Graduate Center. His writing has appeared in venues such as The GC Advocate, Callaloo, The New Inquiry, Poetry Foundation, and the African American Intellectual History Society. He is currently working on a book about representations of black higher education in popular culture.

Johannah Rodgers is an Associate Professor in English at the City University of New York’s New York City College of Technology and the Director of City Tech’s First Year Writing Program.  She is the author of Technology: A Reader for Writers (Oxford University Press, 2014), the digital fiction project DNA (mimeograph/The Brooklyn Rail, 2014), and the book sentences (Red Dust, 2007). Her short stories, essays, and book reviews have been published in Fence, Bookforum, and The Brooklyn Rail, where she is a contributing editor.

Sean Scanlan is Assistant Professor of English at New York City College of Technology, where he specializes in literary technologies and American and global literature. He is the founder and editor of the peer-reviewed interdisciplinary journal NANO: New American Notes Online. And he recently published an article titled “Global Homesickness in William Gibson’s Blue Ant Trilogy” in a 2016 collection titled The City after 9/11.

Grant Wythoff is a Digital Methods and Public Humanities Fellow at Columbia University interested in the history and theory of media technologies, twentieth century American literature, the history of method in the humanities, and science fiction.  His book The Perversity of Things: Hugo Gernsback on Media, Tinkering, and Scientifiction was published in the University of Minnesota Press’s Electronic Mediations series, and will be a pilot project for their Manifold Scholarship interactive book platform.  His next book project is a cultural history of the gadget from nineteenth-century nautical techniques to the twenty-first century smartphone.  Grant has published essays in Grey Room, Journal of Contemporary Archaeology, Cinema Journal Teaching Dossier, Media Fields, Wi: Journal of Mobile Media, and The Programming Historian. 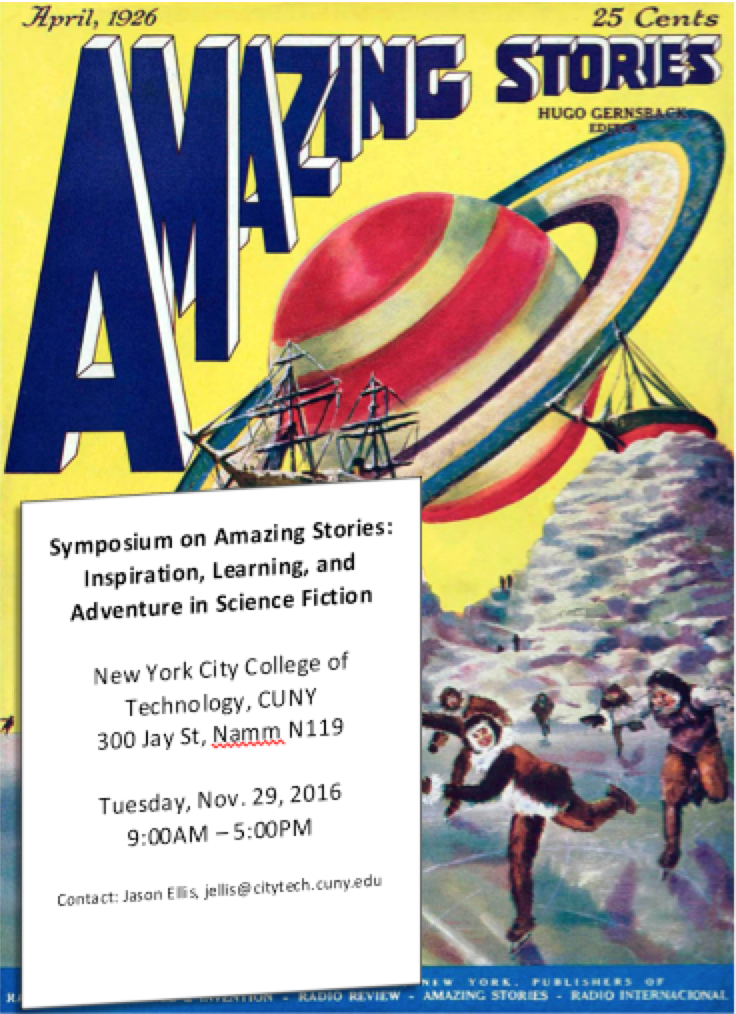 When the widely recognized “Father of Science Fiction,” Hugo Gernsback first coined the term that captured the essence of the genre we now call science fiction (SF), he envisioned SF as a new form of literature that inspired with prophecy, taught with scientific and technical facts, and engaged with adventure. These traits unique to SF have launched many of its readers on trajectories into the STEAM (Science, Technology, Engineering, Arts, and Mathematics) fields.

Join us for a one-day symposium exploring SF as a medium for engaging imagination, a means for exploring STEM/STEAM fields, and an instrument for discovering interdisciplinary connections, and also celebrating the new City Tech Science Fiction Collection held in the Archives and Special Collections of the Ursula C. Schwerin Library.

We invite presentations of 10-15 minutes on SF and how it fulfills learning, inspiration, and fun in STEAM-focused environments. Possible presentation topics include, but are not limited to:

• SF inspired STEM careers (or what SF inspired you to enter your field?)
• SF as a teaching tool (or what SF have you used or want to use in your classes?)
• SF’s imaginative functions (or Gedankenexperiment, considering ethical issues and unintended consequences, visualizing the influence of science and technology on society)
• Bridging STEM and the humanities via SF (or SF as an interdisciplinary cultural work that embraces STEAM)
• SF and place (or SF’s deep roots in Brooklyn and New York City)
• The fun and learning in archival work in SF collections (or making the City Tech Science Fiction Collection work for faculty, students, and researchers)

Hosted by the School of Arts and Sciences at the New York City College of Technology, CUNY.

Before getting out for Spring Recess, Prof. Jason Ellis asked his ENG 2420 Science Fiction students what SF inspired them and what SF in general does to inspire young people to pursue STEM careers. These are some of their insightful responses:

Nurul Alam, Mechanical Engineering
“Science fiction can open someone’s mind to potential ideas, things that people normally think is impossible. We have a lot of creative fields here at City Tech. In a way, we are the future.”

Brandon Francis, Undecided
“I enjoy really thought provoking and complicated science fiction such as “—All You Zombies.” Science fiction can inspire people to want to create things that are seen in movies or TV shows. Inventions that are seen on Star Trek, like video chat, wasn’t possible at the time of conception but now it is a reality!”