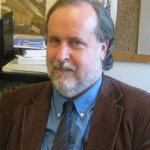 Aaron Barlow (Ph.D. English, University of Iowa), a science-fiction fan since the early 1960s, first developed a science-fiction course as an undergraduate in 1973. Almost a decade later, while in graduate school, he helped design and format the text for Watch the Sky, a telecourse on science-fiction film produced by Iowa Public Television that he also helped grade. At the same time, he revised and taught two correspondence courses, “A Science Fiction Spectrum” and “The History of Science Fiction.” After arriving at City Tech after more than a decade away from academia, he helped develop ENG 2420: Science Fiction, has taught it and has also taught a single-author course on Philip K. Dick. His 1988 dissertation on the fiction of Philip K. Dick was translated into Spanish and published in Madrid in 2004 as Cuánto te Asusta el Caos?: Política, Religión y Filosofía en la obra de Philip K. Dick. Jill Belli (B.A. in English & Classical Studies, University of Pennsylvania; Ph.D. in English with doctoral certificates in American Studies & Interactive Technology and Pedagogy, The Graduate Center CUNY) is Associate Professor of English and Co-Director of the OpenLab, the college’s open-source digital platform for teaching, learning, and collaborating. She is also a founding member & developer of the Writing Studies Tree, an online, open-access, interactive academic genealogy for the field of writing studies. Jill has extensive expertise and experience in utopian studies and science fiction, and regularly designs/teaches courses, presents at conferences, and produces scholarship in these areas. She also serves on the Steering Committee, the Teaching Committee, and as the web developer for the Society for Utopian Studies. Her interdisciplinary research centers on utopian studies, positive psychology/happiness studies, writing studies, digital humanities, and education/pedagogy, and her current book project, Pedagogies of Happiness, explores their intersections. Visit Jill’s website to learn more about her scholarship, teaching, digital projects, and service. You can also visit her OpenLab profile, to see all the courses she teaches (many of which are Science Fiction!)

Jason W. Ellis (B.S. in Science, Technology, and Culture, Georgia Tech, M.A. in Science Fiction Studies, University of Liverpool; Ph.D. English, Kent State University) has research interests in the connections between digital technology and the human brain as explored in 20th/21st-century American literature and popular culture, including science fiction. He coedited The Postnational Fantasy: Postcolonialism, Cosmopolitics and Science Fiction (Jefferson, NC: McFarland, 2011). He has taught Science Fiction courses at Georgia Tech and City Tech. He served as Vice President of the Science Fiction Research Association (SFRA). Follow him on Twitter, or read about his pedagogy and research on dynamicsubspace.net.

Mary Nilles (PhD, MA, New York University; MA, Long Island University; and BS, BA, College of St. Theresa) began studying and writing about Luxembourger immigration to the United States following her first Fulbright in fall 1973 to Belgium-Luxembourg. Witnessing the technology-driven transformation of Brooklyn and the on-going development of City Tech (as well as playing an important role in the preservation of its technical history and art, including technical apparatus from the earlier trade school and preservation of the Klitgord Building Mosaics), led to her on-going discovery of connections between the technology-laden history of the city and the Luxembourger immigrant, New York City publisher, electrical entrepreneur, and father of science fiction, Hugo Gernsback.

Mark Noonan (Ph.D. English, The Graduate Center of the City University of New York; M.A., American Studies, Columbia University; B.A., English, Connecticut College) has research interests in American Studies, Periodical Studies, Journalism, and 19th-Century American Literature. He directed the 2015 NEH Summer Institute titled, “City of Print: New York and the Periodical Press from the Antebellum Era to the Digital Age.” He is the founding editor of Columbia Journal of American Studies and serves on the advisory board of The Research Society for American Periodicals. Lavelle Porter is a writer and scholar of American and African–American literature and history. Born and raised in Meridian, Mississippi, he graduated from Morehouse College with a B.A. in history, and the CUNY Graduate Center with a Ph.D. in English. While at the Graduate Center he worked for the CLAGS Center for LGBTQ Studies. He has previously taught in the CUNY system as an adjunct at John Jay College, LaGuardia Community College, and City Tech. He spent several years as a walking tour guide with Big Onion Walking Tours, has appeared on television programs discussing New York City history, and incorporates his passion for the city in his writing and teaching. His current research is on academic novels – fictional narratives of colleges, students and professors. He is currently working on a book that examines the history and politics of black higher education through fictional narratives of college life.