This past Thursday I attended a rather interesting workshop that was based on how to start your own business. Since my class ends at 1pm, I did show up a bit late to the workshop but had enough time to quickly catch on to the lecture. The reps were talking about what are the basics required for even thinking of starting your own business.

Interestingly enough, she had us divide into groups of either teams of two or solo teams, gave out large paper so we can write down answers to the ten questions she asked us to discuss amongst ourselves and ultimately share with everyone. I paired up with this awesome person named Kala, “without the y,” as she called herself.

We were asked what type of business we were interested in creating. My partner and I chose an anime and video game club. The idea of the club is for like minded individuals to come together and either play games or watch anime without any judgements. I based this idea off of the club I am Vice President of; Anime and Gaming Underground here at tech. For those interested, we meet every day at the Atrium fifth floor lounge. We host events, play video games, watch anime and have great parties! Find us on FaceBook!

She asked us what kind of services would we offer. We answered, aside from the usual services you would find at AGU, the addition of paintball and team death match games. We would have a variety of paintball guns and armor available so our customers could customize their favorite pieces. Of course tournaments would be held for the team death matches and paintball games as well as for the other various sports games offered. 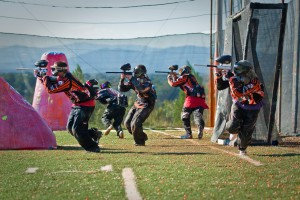 She asked us who are our customers. We answered with our target audience are college students, AGU, video game and anime lovers, cosplayers, anyone who enjoys fantasy books and stories.

She then asked us what would make our business different from others in the market. We listed that ours is different because we would be an LGBTQ safe space, anti-bullying space, we would be a large scale business with around five floors of entertainment services available, of which one floor would be dedicated to indoor sports.

She asked us what would be the start-up cost. We were a little anxious answering this question as how could we possibly know what exact amount to request? We initially put down $30,000 – $40,000 but then increased it to $1M as we assumed a five floor business equipped with the latest gizmos and gadgets in the gaming and anime world would be quite costly.

How many employees would we need? We started with about thirty employees but then decreased it to twenty. This number we were also a bit leery on what to write down.

And the final question was where would we be located at. We listed in either the lower east side of Manhattan or somewhere in Brooklyn.

We then had another representative talk about his business and the services he offers. I grabbed one of his business cards. My partner seemed very interested in his lecture and approached him after the workshop had concluded. He shared some valuable tips on the basics of basics in starting your own business. He even gave us some brochures and business cards! 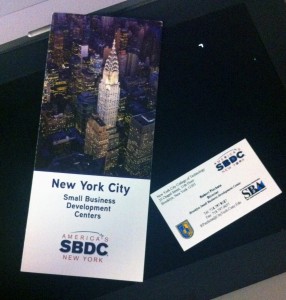 Overall, the experience we had was interesting and fun. My partner definitely made the experience much more enjoyable and I’m glad I met her. I’m totally going to invite her to the next workshop I have to attend. Networking totally works.