This past Tuesday I attended another networking event called Your Network = Your Net Worth with representative Dorothy Doppstadt discussing how to gain better understanding of the viewer’s own story and how this can be used as leverage in our career paths, learn about proper business and casual attire and the best ways to follow up after attending a networking event. I took my buddy Walker and he seemed to be really into the topics we talked about. 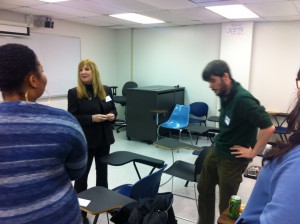 Truthfully, we had heard about the free food so had decided to attend the event only to grab a plate and skedaddle in half an hour. However, once we got there and began talking, we got so into the subject we ended up staying for the two hour presentation. 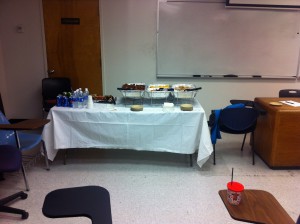 One of the things we were asked to do was to stand up and introduce ourselves to the audience. I nervously stood up and said my name, major, spoke of my graduation in june and my interests in video game design. Doppstadt asked me what I enjoy about video games and what I want to do with them. I explained how when I was having hardships in my life for any reason, I would always retreat to the safety of new worlds you can explore and conquer found only in video games. In these worlds, you are important. More often than not, you are the protagonist of the game and must help save the world. In times when I feel unimportant or worthless, I pick up my favorite video game called Mass Effect and I literally save the galaxy from the big bad guys, the reapers. I explained how I want to make a video game that will allow players to feel the exact same way I did when I first started playing them to escape any problems I was having. Doppstadt took note of this and said that was the most important piece of information I just said and should take note of it when introducing myself to a potential employer.

We then discussed the aspects of our resumes. We were handed questionaires about our resumes and the first question asked us to list the three things that make our resumes stand out the most. I put down my graphic design layout, my name (I mean really, how many people can say they were named after an x-man?) and my rose logo.

Other than students, members of Student Life attended the event as well and I so grabbed one of them for a picture! 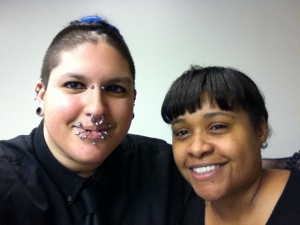 Tiara the Student Life Event Coordinator and I.

A noteworthy question I was asked is what I planned on doing with my summer as well as when I graduate. I actually had been asked this by Professor Accardo this past Sunday during my internship. I told her the same thing I told Accardo, I have no idea what to do and I’m really nervous about it. Due to Senior Project taking so much of my personal time up, I was unable to be the doating aunt I usually am to my two year old niece whom loves playing legos with me so I had promised her to spend as much time with her during the summer as possible. I told Doppstadt this and she said that if I don’t do something towards my career during the summer then that’s a pretty stupid thing to do.

We spoke about what I did want to do with my career and then moved to my internship with Accardo Studios. As I described my time with the studio, she asked me if I enjoyed my position there. I obviously do so I said yes and I wouldn’t mind staying on permanently. She smiled and said then I should do just that. After asking me a few more questions about my internship and Professor Accardo, she encouraged me to speak to him about continuing my internship during the summer with him or even better, an actual job position in the studio or with another artist that needs an assistant. She explained that even if he says he can’t hire me and the internship isn’t an option, he may at the very least be able to give me valuable information on where I can find a job I want.

After the long discussion about the internship continuation, I was excited to speak to Accardo about it and see where this leads to. The next day, I went to his studio for internship as usual and towards the end of my shift asked if we could speak later. Once everything was set and done, we sat down and I spoke to Accardo about the networking event I attended and how I was encouraged to pursue career opportunities during the summer. I told him how I would like to continue my internship with Accardo Studios throughout my summer as the experience I’ve gained from being here is astronomical and feel I can learn much more from his mentorship. We spoke about what I want to do with my career; do I want freelance work or to continue being mentored by Accardo. I stood quiet for a few moments and finally said both. I would love to start actual work for profit but at the same time do not view myself at a professional level just yet to really get work so soon.

After a long discussion, we agreed to continue on with my internship during the summer. I’m glad for that, as that gives me the opportunity to really work on Topsy so he and the Professor come out looking the best they can rather than rushed because my biggest priority is finishing Senior Project in time. 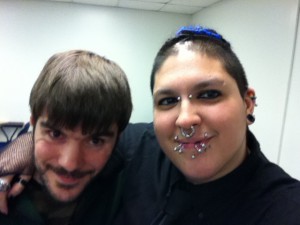 Overall, the networking event was rather enlightening and even further, motivated me enough to ask about continuing my internship, something I probably would have never done even though I really wanted to continue working at Accardo Studios. I’m glad I went and, if I have enough time to get away from Senior Project, plan on attending next week’s follow up event.