The day started off well with my waking up early and being at CityTech at about 10:20 am, then everything changed when the fire nation attacked. 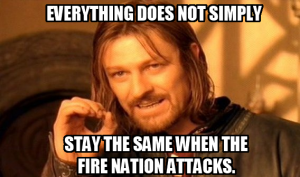 I’m not a person whom has a very good sense of direction and don’t have a working phone so I had requested the assistance of a friend to get me to the internship location. This friend was supposed to meet me at CityTech but unfortunately canceled on me at the very last minute. So I was left to my own devices and tried my best to make it there on time.

I got lost heading from Tech to the R train for 20 mins. I got lost again once I got off the train and walked aimlessly around until I found a wifi hotspot so I could use the GPS on my useless iPhone. Before I knew it, I was already an hour late to my internship. I finally walked to the block my GPS claimed the studio was located at and rang the bell of a random place. When there was no response, I stood outside for 20 more mins not knowing what to do with myself.

I continuously got and lost wifi reception so I walked around the area until I found a strong enough hotspot to send Professor Accardo an email asking him if he left already. It was then, when the sun finally came out, that I see Professor Accardo across the street, standing in front of a large building, of which was his art studio, waving me over. I ran over there, my fingers nearly frozen around my iPad. Smiling away, his first response to me was to ask if I was expecting rain. He was totally cracking jokes on my hat when I almost froze my entire existence outside looking for his studio. Either way, my hat is totally cute. 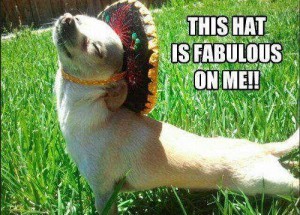 Anyway, I went inside his studio and he showed me around. Interestingly enough, his studio is one of his three houses. It is a 2 story house, which he owns, with a large basement converted into a studio. It was, to say the least, quite impressive. He showed me his collection of art books, action figures and pieces he has done. 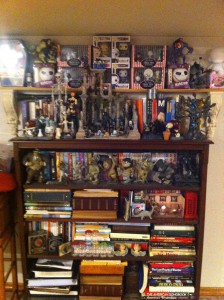 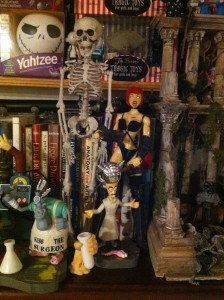 The only action figure still in it’s box is the zombie/gothic Dorothy of Wizard of Oz. When it comes to toys and action figures, Accardo believes they are meant to be played with not to sit in their box and collect dust. 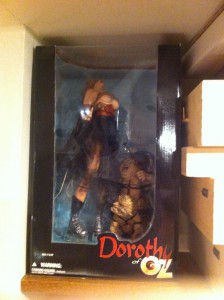 Vampire Dorothy from the Wizard of Oz

True enough, I couldn’t find a single one still boxed except for this one so I paid special attention to it as I’m sure it’s a valuable piece any collector would love to add to their collection. Accardo won’t part with it, I’m sure, but still it wouldn’t hurt to take note of the piece.

Another interesting fact is the building his studio inhabits was once a candy store his mother owned. Accardo even still has some toys and memorabilia from the candy store history. 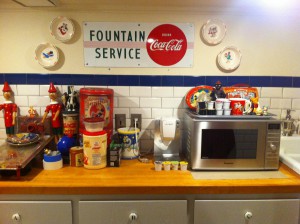 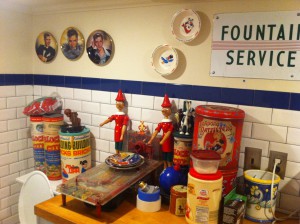 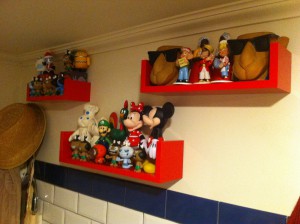 This sign was placed on the front of the building as the main advertisement for the candy store. I was so excited to see it still in great condition, despite the years of use. (pictured below) 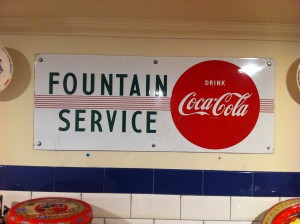 The lunch box you see placed amongst the toys happens to be the very same one Accardo used when he was a young boy. It has some wear and tear, from obviously being used, but it is still in marvelous condition! I honestly have a hard time picturing him as a boy without the graying hair and signature skull ring. 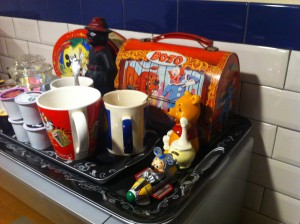 A notable illustration by Accardo was a very symbolic piece featuring a young man, of whom is facing the hardships experienced during the Stonewall Riots. He is seen standing outside the Stonewall Inn, on either side of him are a clergyman, a riot police officer, a doctor wearing those old beak gas masks and a pregnant woman. It was very expressive and beautiful. 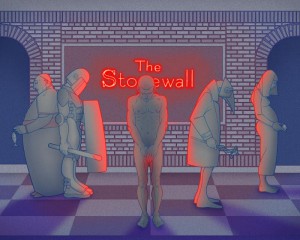 I also enjoy the pic, taken with my crappy iPhone camera, because you can see my faint reflection in the piece. As an avid equal rights supporter and out gay person, I get the sensation of my being immersed into this piece, into the world Accardo has created. While studying this piece, this becomes a rather thrilling and intense feeling to experience. 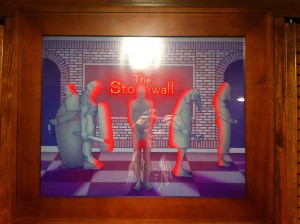 iPhone pic of the Stonewall Painting

He then showed me my work station. (pictured below) I immediately pulled out my sketchbook, drawing utensils and got to work. (you can totally see my cute hat too) He explained to me how he also has another permanent intern, whom was not present at the time, that comes in every few days to assist him with larger projects. His partner is also a part of this company, whom was also not present when I came to the studio. It looks to be about three designers, including Accardo himself, I will be interacting with while working here. I’m excited to meet Accardo’s husband and the other intern next week Wednesday! I’m sure we will design some really amazing pieces together. 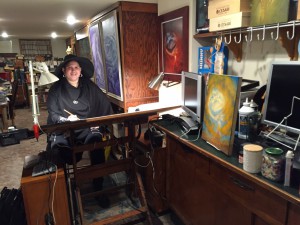 Behind me, you can see some of his larger pieces he has displayed in the last two illustration classes I had with him. I was rather excited to see these pieces being displayed as I didn’t realize how large they actually were. 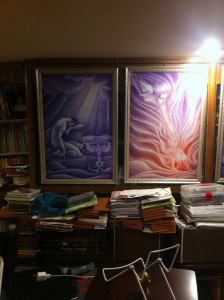 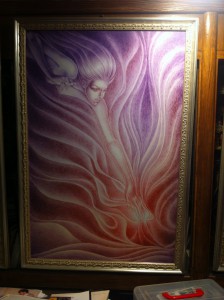 There are several of them displayed around the studio. It’s hard tor really appreciate their size without an object for reference but, try to imagine the length of these paintings are the length from my groin to the top of my head. Quite massive, aren’t they? 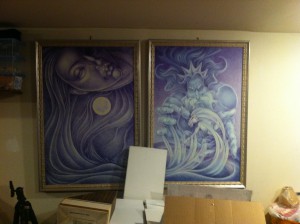 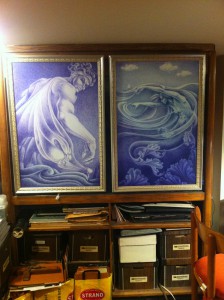 The following piece is by far my favorite of his paintings in this series. It is quite a bit smaller than the other pieces from this series but I still enjoy the subject and the palette choice. The high contrast between light and shadow is especially eye-catching! 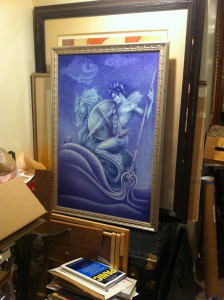 My favorite of these pieces

Just to the left of my work station is a desk that has two computers on it, both are equipped with 3D modeling software so I’m excited to start working with them the next time I come in to work. 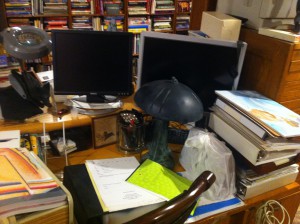 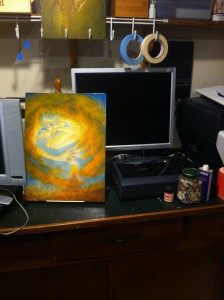 All in all, my first day on the job started rather rocky but, once I was back within my element, I was able to get some work done. The environment was instrumental in allowing me to reassess on what I really want out of my education here at Tech.

I would love to be a video game designer but being a freelance designer has a more intense attraction. If I play my cards right, I may find myself in Accardo’s shoes one day, with my owning my own home/art studio while having as many clients as I can handle at one setting. Hopefully, I can one day make that dream an actuality.