Think I’m the first to submit my assignment in Coughlin’s box, posted the No Class sign on the door, and now it’s time to vote. Today’s the day to vote for Student Government  Let’s get out there

Just in case anyone forgets 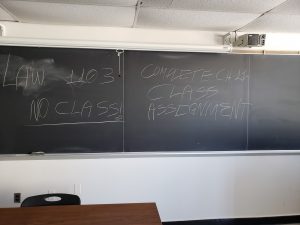 Abigail’s Adventurous Abiding Adjournment in Albany: Observations and Reflections of the trip up to Albany

It was a pretty temperate day, neither too warm nor too frigid. I took off from my house at almost 5:00am to run 20 minutes for the train to the ferry. I finally arrived at CityTech at about 7:15am. Although, It would be another 5 hours before we would reach Albany at approximately 12:15pm. I spent the bus ride there riding with three other aspiring women. Once we arrived at Albany and had a quick lunch it was time to proceed to court.

We arrived at the courthouse somewhere around 1:40pm. Check-in through security was pretty routine for a government building. I was warned not to open up my gummy bears in the court room. Darn! All I need is to get sanctioned for contempt of gelatin. Inside the building reeked of tradition, order, and formality. From the mural on the central ceiling to the filigree woodwork in the court room. I wish I had not worn my hearing aids all through the ride, as prolonged usage weakens their effectiveness. Something that precluded my participation in the conversations Latasha-Nicole and Marlo would have with Mr. Spencer (court of appeals public information person) and Officer Shevlin before the trial. We had managed to get into the court room early thanks to Latasha-Nicole and Marlo and their effusive nature. They attracted the attention of Gary Spencer. Gary Spencer, the public information officer, after showing us in proceeded to give us a brief historical synopsis concerning the court, followed by a short lived Q&A session. It did not take long before picture taking and historical narrative led to 2:00pm. When the words “Hear ye, hear ye” ascended everyone to their feet and all the justices except Judge Fahey entered for the initial proceedings. He would later creep in as the appeal against PSC was convening. The attorneys from the first contestant, David Burke, were kept anxious by the continual inquisition by the judges. The first two trials were extremely long winded and technical. With a lack of excitement being replaced with legal verbosity.  The last appeal was certainly shorter and less verbose than the early combined appeals against PSC. But People versus Brown was certainly a match to see. Justices progressively leaned on both sides heavily. At one point you could have sworn it was a heavily contested game of tennis. With both sides posturing to get that one last shot over the net to break the tie.

After the court was finally adjourned, we went to tour the state capital building. I believe professor Espinosa’s intent was to have us witness our great state legislature in action. As we walked through the building we began to see more and more anti-choice protesters relaying signs against Cuomo’s late term abortion law. To which my thought was, “I have a bad feeling about this”.  We attempted to access the chamber through the second floor. Only to find the elevators kept bypassing it. I started voicing my thought that it could be intentional, that the protests could be blocking our access and the elevators weren’t stopping on that floor for that reason. We finally found out, through attempting to access the second floor by the stairs,  my assumptions or something relatively close to them, was indeed what was going on. After bopping around the capital building for an hour or so more. Appreciating the architecture and the informative historical displays, it was time to get back to Brooklyn. So we finally made our way back outside where the bus picked us up at around 5:00pm. I arrived back home at about 10:30pm…exhausted and cranky about having to get up again at 4am. Yet, somehow energized and fulfilled from the experience. I took in a lot this day, fostered some friendships, and learned a lot from people and the experience.   I think we all did. Good luck to everyone on the memorandum .

In an unrelated topic, on Wed 04/03 immediately following class..i will be running ALLLLL the way over to Grace Gallery to speak on a round table concerning Gender & Sexuality.. And for those who didn’t get it, Grace Gallery is right across from. The bathrooms on the 11th floor. Should make an interesting transition from class.

Well here it is.. Albany’s eve and tomorrow we’ll all be heading to court.  Check-in time is 7:30am in front of the Namm building on 300 Jay. Attire is business casual  See you here bright and coffee, I mean early, bright and early. 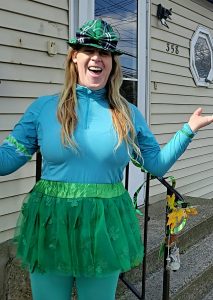 Happy St. Pat’s from this wee Irish lass in the middle of Staten Ireland

In an article on March 13 Jennifer Bendery covers how the Neomi Rao was confirmed as the replacement for Kavanaugh. The article goes on to explain Rao’s problematic history, such as her published opinions on women and how they’re partly to blame in date rape. In addition they highlight how as the Administrator of Donald Trump’s Office or Information and Regulatory affairs Rao has worked to weaken protections for victims of sexual assault. Bendery continues to illuminate how Rao has never been a judge and recanthow Kavanaugh, confirmed only a few months earlier, amidst allegations of sexual assault. I presume to to contrast for oeony’s sake, that senate followed the appointment of an alleged assailant, by appointing someone who seems to be a rape apologist to replace them.

I am conflicted on this one. As a woman I want to be sympathetic to women everywhere. The problem comes from those who conflict with the general needs of women. Rao has demonstrated this time and time again as her desire to hold another woman accountable for drinking too much, translates into your responsible for what he did because your drunk. To put this into context, this is similar to blaming you for letting the rapist in because your bedroom window was open on a summer night. And my opinion is if you wouldn’t break into my bedroom in the middle of the night, then you shouldn’t be doing it to me when I’m incapacitated and unable to consent. Lastly my opinion is having an apologiest on the Supreme Court may not overturn the precedent set, she may alter it in such a way as for it to be counterproductive. Take for interest Texas. While abortion in Texas is very much legal. The regulation and licensing of abortion clinics, however, is so that it’s almost impossible to easily get an abortion unless you have transportation and means to travel great distances, you aren’t getting an abortion. Given Rao’s history, academic work, and public opinions I am deeply concerned: first the impact she’ll have on sexual assault issues, but over the long run on women’s issues in general. To say the least I think this is one appointment all victims of sexual assault will watch with a scrutinizing eye.

Don’t forget next Tuesday is the trip.. You need to have yourself here by 8am.

Next Tuesday is the trip.
Remember be here before 8am.
Bring an extra journal or. SS notebook if you plan to use the opportunity for court observations. Also, as silly as it sounds, if you have classes, especially with pending midterms, you should clear it with those professors and see if there’s anything they need you to cover.
This trip will be a bust if your grades suffer for it. 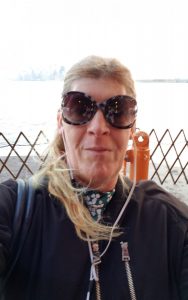 Good morning fellow students best of luck to everyone on the midterm.

Ok.. You know next Thursday the mock trial will be looking at mock opening arguments for our first criminal case

But did you know that Next Thursday the group will be hosting its first guest speaker. The president of the NY Paralegal Association. Come on,.you plan on making this a career right.. Get your butt down here then.