Ok.. So the first part introduced you to the insignificant things. The things I  would share without much significance. Part 2 was always intended, but my greatest concern was perception of the facts I’m about to present. So here we go.

First favorite things vanilla, pistachio, carrots, celery and broccoli. Butttttt pllllleeeaaasseee don’t ruin the carrots. I wi take good carrots in any form. Do, anything to ruin them and take away their essence. Overcook them or candy them to death and blyeercckk..Beaches, Walking, Warm Weather,.. Unless it’s a brutal snowfall in which case snowfortresses. Biking, when My bike actually works. My opinion of gyms is they’re great substitutes for what you can do with a bike and barbells. And if you think that’s dudely then you haven’t met my mother. Who at 70 is taking classes in woodworking, and loving it. Or who literally fixed a washing machine almost by herself last year and I don’t mean a simple fix.

My favorite forms of transportation are on foot or bike. I cannot even stand trains over short distances. I walk to Barclays/Atlantic from here. I’m not that disabled and definitely not in that way. I tend to stand in public transportation because I can and the longer I can keep body afloat the better. So Ill tap my feet holding on to the railing why I listen to Juan Miguan, Two Without Hats, and Laura Brannigan. FYI.. that’s 80s, 90s, and 10s. I listen to anything that’s toosm. You can go ahead and have that ♿ seat on the train.

One I’ve been disabled most of my life and  well drecnched in the vestiges of my disabilities. This includes a mild persistent form of dyslexia, Juvenile onset epilepsy (currently in remission and unmedicated), and mixed mode (meaning from multiple sources) hearing loss. All of these things trace way back in to my childhood. Where I started out my school career in Special Education, HC-30. Which is specifically for  children who suffer from TBI (Traumatic Brain Injury). This includes Epilepsy, Down Syndrome, certain mental illness or psychiatric conditions, and so on

It would also be prudent of me to mention I also suffer from dysthymia. Which is long term persistent depression as opposed to the popular episodic disorder oddly labeled general depression.. Next I’m going to skip around a grave amount of detail in the interest conveying the most in the least amount of time.

The short of it is I have been brutally mistreated at the hands of my able bodied (and able minded) peers. Including gut punching and strangulation. When it came to the point I was transfered, on my first day, the warmest day of 1977, the first day yard time would be permitted (it actually went below 0 the previous week), I was lured to the corner of a school yard by two 14 year old boys and was raped.Needless to say that day ended up feeling like the coldest day of the year even though it. Went up to 83  degrees.  I would end up transferring to two other schools before finally settling into the fourth on my way to Middle School. Interestingly enough I honored in English Literature, English Composition, and H. S. Science and Chemistry. Oh and the violence never really stopped against me, but hitting puberty gave people some other stuff to concentrate on. Oh I also debated in mock trials twixe in middle school and twice in HS. I also precided over four mock trials in HS.

My first attempt at college was in 1991. Even though the college knew of my disabilities, access later verified some of the lesser visible ones through neurocognitive testing. The excuse was there was nothing they could do. Which is laughable. Ironically I ran into Phillip Michael Tbomas’ nephew who was also Learning Disabled and we conversed quite a while. But that was not even a drop in an otherwise mirky swamp. I would end up investing 6 years in what would be  a 15,000 student loan debt after the interest rates were gouged. Something that would take me around 20 years to fix through disability discharge. That was about 2010.

The shortest way to put this is I’m taking my time because of how horrible the previous experience was and how much more enriching this one is. But I should put forth I’m not here for appetizers or even the main course, I’m here to buy the restaurant.

Over the summer the National Trans Bar Association will be kicking off a three (3) day mentorship summit geared towards attorneys and law students who are transgender (all variants of binary and non-binary genders). The summit is mostly geared towards upper level students and practicing attorneys. But given the intimacy and size of the community i’m sure undergrads will be welcome to. Also, all transgender students, are welcome to sign up for student membership via the website. The web domain is transbar.org and is accessible from any computer or mobile device.

Also there is a Trans Rights summit in Washington, DC on May 9. Details are also on the website. Feel free to share with any law students you may know that are transgender.

Aside from the one who’s posting this and already a member. 🙂 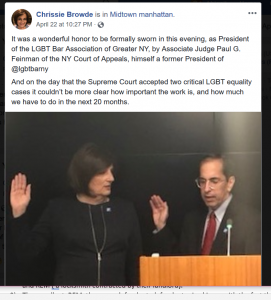 Kristen Prata Browde, founder and board member of the National Trans Bar Association, was sworn in this Monday as the new and current president of the LGBTQ Bar Association of Greater NY. Of course , it was only fitting, she was sworn in by Justice Paul G. Feinman, as he was not only a previous president of the LGBTQ bar of Greater NY, but the first openly gay justice sworn in to the NY State Court of Appeals. 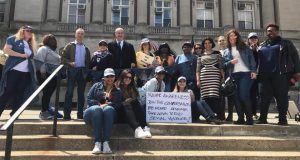 I hope everyone is having a great holiday week

The call to action against sexual assault and violence continues. Tomorrow I will be taking to the steps of Staten Island borough hall yet again as the rally begins here tomorrow morning.

I also plan to be present at the city wide rally on Wednesday, as I also was last year, as Latisha James rallied for more supports for sexual assault survivors in the public schools

I invite everyone here to me. At either or both rallies

Ooooohhhhh .. I forgot I had these pictures from my trip up to Rochester .. 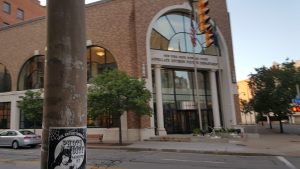 Loyal Litigants … I present to you the Appellate Division Fourth Department in Rochester:) I was so enamored to be staying up the street from it, I just had to snap shots of it. For those who want to . Sitting at the corner of E. Main and N. Chestnut. No i’m not making that up. As far as Rochester, just imagine somewhere between the personalities of Brooklyn and Albany but with less of a manic / overpopulated feel. And actually for those who went up to Albany; Rochester is a pretty progressive and ethnically diverse are inheriting it’s politics from more North of the Border.

That being said if you’re taking a passenger train or aircraft then prepare to be carded. Border Patrol and Homeland Security are super present up there since #45 took office. 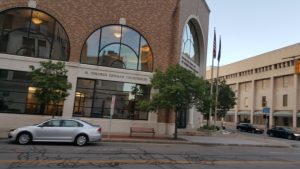 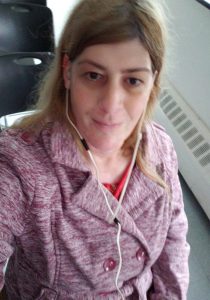 OK m. Maybe not an old expression. Like it was from way back at 8am this morning  Anyway don’t forget the Quiz is at the begining of class today . Focus on 4,5,8, and 12. I recommend also giving  some attention to 9 as well to be on the safe side.

Also get those court memorandum drafts tied up. According to the class memo they’re due on Wednesday…

Guess what today’s after-school special is..

Long has the NRA fought to keep guns in circulation, many times making the most irrational arguments imaginable. In this prolific piece, Sheryl Stolberg attempts to isolate their latest attempts, fighting the renewal of the revised VAWA (Violence Against Women Act) as it once again attempts to close the boyfriend loophole. Which essentially is a gap in the DV sections of VAWA that allow perpetrators of violence and stalking to still be able to posses a firearm if there is no formal relationship between partners (e.g. fiance, spouse). The current rendition of the VAWA which redefines that no formal nor any relationship be required for the law to be applied. The perpetrator simply needs to be convicted Sheryl Stolberg rightfully points out that the NRA’s core argument that the revision means it can be applied to any trivial act is ridiculous, since the law requires the person be convicted of stalking. Certainly something one or two simple texts, without other prior conduct, will not get you convicted for stalking. Stolberg justly summarizes the article by pointing out even in likely Republican allies such as Trump, Pence, and Lindsey Graham are increasingly behind red flag laws which apprehend firearms for those convicted of partner violence. Highlighting the unpopularity of the NRA’s opinion.

In my honest opinion the NRA needs to back down on this one. It’s need to challenge every single gun control law regardless of how sensible the law is has gone from laughable to downright offensive. This latest objection is just a demonstration of how contemptuous they’re rhetoric can get. As a victim of multiple forms of violence in my youth  and partner violence in my adulthood, I take offense to the NRA’s attempt to humanize the 2nd amendment rights of violent perpetrators. Not just personally., but socially and ethically. The position is both irreprehensible and irredeemable. At what point do we say enough is enough. Do we defend the rights of convicted serial killers to posses firearms in prison. Regardless of my feelings about neoconservative politics. I am glad the right has seen its way to steering clear of this train wreck. I am also glad Stolberg took on this topic and highlighted the right-wing who currently support adverse policies.

Yayy.. They fixed the pool area at LA Fitness. 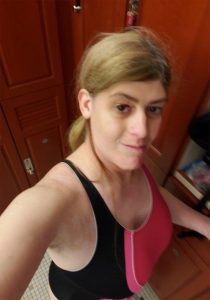 Hope everyone had a good day off. Going for a swim and then to settle down to do Wednesday’s Summons assignment  Don’t forget 4/10 is deadline for the draft  Hint   I’m doing a new news review soon

not meaning to pressure everyone. Buttt…

There are a lot of write in positions for the student government .I’m not going to say whom but I wrote in a few names. For. Senator, there’s also an opening for a chief Justice  Would appreciate if people could write my name in for Student Government Senator of Accessibility. For obvious reasons, accessibility is my thing, so it makes sense.