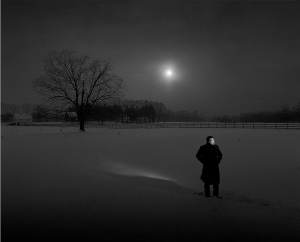 In Gregory Heisler portfolio site of all the pictures he has taken. This one grabbed my attention the most due to a weird sense of small confusion. It was under the label “strange,” and when I stare at the image without thinking to hard or to long about it. It definitely has a sense of strangeness. In the image he only seems to be using two light sources, one being the moon to light up the world and the second being a man made light primarily on the subjects face which is a front light in this case, to expose it more than anything else. while the mans body is the darkest thing in the image. completely separating him from the grey snow around him.

The fact that the front light is only exposing his face is the strange part of the image because it sorta causes the face to look weirdly fake, and to add on to the strange side. The man clearly has a shadow of his body behind him on the floor meaning the light is hitting his body but somehow the body is still blacked out with no detail to show besides the outline showing the shape of his body. With only these two lights sources it also gives the background a eerie feel or a supernatural feel with the far distance and emptiness and how dark it is. Kinda makes it look abandoned or has if the man in the image lives in these huge empty acres all by himself.

This image gives me curiosity about everything in the image but also gives me a feeling that makes me never want to visit this strange huge empty farm like area at night.

After looking at Gregory Heisler’s work there was an impression of calmness and he was attentive when choosing the models for his photographs. When shooting the portraits Heisler seems to have made sure that his subjects were in the right angle for the light source to give the subject a dramatic look. The calm expressions and the black and white filter gives the photo a dramatic tone and, the photos with colour are also very well done, they are well lit and have a cheerful tone to them. In most of Heisler’s work you can see that select parts of the photo are blurred out and usually the clear part is the subject’s face or figure which is another dramatic tone that these photographs have. One photo that stood out to me was one of the old man who seems to be a monk of sorts, Heisler seems to be using Rembrandt lighting, it gives the man a look of “I have so many stories to tell” which is great because every photo should tell a story. The triangle shadow that the man has is also a good touch and goes to show the great lighting that Heisler uses.

GREGORY HEISLER, After I watch his works, I felt a sense of shock. First, he was very careful in choosing models. The subjects he chose were all portraits, including full-length, half-length and partial portraits. I think he is very good at guiding the model to make different eyes expressions. This kind of expression and the black and white contrast of the photograph, the eyes bring very dramatic styles. I like the picture of the old man very much. First, I noticed that most of his light came from the upper right corner. It gives a very weird feeling, which may be related to the characters themselves. Secondly, he asked the model to put her head forward, so we can see that the clothes and ears of the characters are all blurred. More focus on his face. He used Rembrandt light. The most important thing is to give people a sense of film photos, very simple. The last thing I like most is probably the character’s eyelids forming a triangle and the look up movement. This leads to this weird and different portrait. Most of his works give me the impression that the eyes are equal to a person, and basically the work itself relates to the eyes. So, I think he is a very strong and guide the model how to make these movements and eyes. 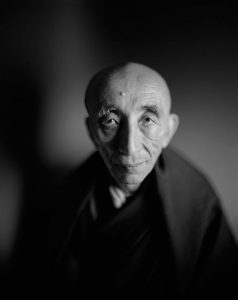