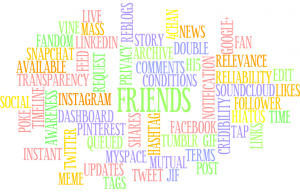 Before using Tumblr my idea of a ‘dashboard’ was only that of in a car. It has never occurred to me how social media has adapted and changed language in the sense of how we reference or relate a word, how we interpret and define, the physicality of that word, and in the biggest way how we use language. Take for example, that tweets no longer only come from Rockin’ Robins anymore, the concept of ‘feed’ is not to give food, certainly a poke is not felt as hard as it used to be anymore, and lets face it; the act of being social is not that social if we are going to get technical. Our language is evolving once again to adapt to the changes that we are being faced with.

Since the creation of language, people have been able to effectiveexpress themselves in ways to portray emotion, action, and judgement. Over time we have become both virtual and real world members,and due to this movement from spaces we have had to adapt our language to fit both real life and online experiences. This shift in our language is created some friction in terms of culture, education, and even expression. Our interpretation of relationships, people, and interests have all changed because of how language is not interpreted.

In, Understanding  Digital Literacies, Jones and Hafner go into detail about how Facebook’s ‘poke” feature and how it exemplifies the ongoing nature of the evolving online culture (pg 119-121). Now it may seem a bit odd that we are examining the simple term of a poke but we must remember that what some cultures may not see fit in person now have the capability to take part in online. Although, this affordance can be seen as an advancement of culture in terms of interaction between sexes it also mirrors the annoyance of being poked in real life. The word ‘poke’ in this case has in some way remained the same in the sense that it still connotates some type of physicality but it has adapted to a new environment which constrains physical interaction but allows the interpretation of interest in a sexual and non-sexual way. From this we can see that as we move more into a social online world the language or words we have been using is losing old meanings and gains new ones due  due to our new nature.

If it is one thing that this ‘evolution of language’ has afforded us; it is that due to this change new mediums have opened up platforms which allows writers to publish and generation attention and participation in their writing. On page 23 of Cohen and Kenny’s, Producing New and Digital Media,  they embellish upon this idea that now more than ever due to the affordance of new media platforms writers are able to publish at no cost besides creative influences. Although, this is a great addition to language because of its accessibility and creative qualities; writing in new media has also trickled down to effect students. Sites such as Twitter, only allow their users to write up to 140 characters. In order to master the site users must be able to eloquently and efficiently produce a tweet that gathers all of their information in one single tweet in order to reach the masses effectively.

However, although this may be effective on one front on anotherit is effecting students ability to produce quality writing. Writing and Editing for New Media, stated that “according to a study done by the Pew Internet and American Life Project, in partnership with the College Board’s National Commission on Writing. Nearly two-thirds of 700 students surveyed acknowledged that their electronic communication style, which primarily is an informal,  interpersonal style, found its way into school assignments. About half they sometimes omitted proper punctuation and capitalization in their school-work, while one quarter said they used emoticons.” (Carroll, pg 253).

Even though we have become more sophisticated in the way we use our words online to depict our emotions, our personal vendettas, and issues we have to become more aware that language we were once used to is no more. We have to educate students on how to effectively move from the print based way of language to the media based way language. Students know how to use these platforms but what they lack is the ability to effectively use all capabilities to produce meaningful and quality content.

As our language changes due to social media and aspects of social media users must become more aware of these changes and how they effect education, culture, expression, religions, and even politics. Our language is no longer one dimensional in the sense that when we reference things it only extends from the world around us but also includes the social media world and the world wide web. Our language is now more than ever more than what it appears to be and that must be understood when it comes to understanding and part-taking in social media.

How do I even begin to define language? Dictionary.com describes language as a body of words and the systems for their use common to a people who are of the same community or nation, the same geographical area, or the same cultural tradition. But I believe language to be more than that. I think it can be viewed as a journey in connecting people, things and giving them an chance to co-exist. As I look to dictionary.com to define writing, I realize there is no true words that can define writing or what has been written or the act of writing. The one word that comes close to writing seems to be magic. Writing is magic because its an art of producing art, despite how mundane that may sound. It’s magic and beauty in the purest of sense.

In Chapter 8 of the Carroll textbook (pg. 253) he says “Both Twitter and the telegraph have been blamed for erosion of language. Email, texting, Facebooking, and chat, too, are likely having a corrosive effect on language.” I was surprised by the bold claim Carroll made about the effects social media has had on writing. When I look further into it, Carroll does have a point. Most of us are participating in emailing, texting, facebooking, tweeting, sharing, instagraming, snapchatting, blogging, and the other mediums and each require the user to be knowledgeable in that space. In addition to the users being knowledgable on how to communicate in these spaces, the way in which they communicate in the space is extremely important. The way in which a composer speaks on a blog or sends a tweet or a Facebook post is entirely different. Sites like Twitter, limit the user to 140 characters to convey his or her thoughts. For this purpose the user must use language that pertains to that audience and the space. By using these many medium they all play a role in our language.  Our communication styles on these platforms significantly affect how we write. Some of these habits make their way into our professional careers or school work. Social media is giving new meaning to writing whether or not we see it as a affordance or a constraint. Even the dictionary has changed. Words like seflie, bruh, fleek, awesomesauce, manspreading, etc.  has someway made it into the dictionary. It is absolutely no doubt the impact of social media and generating new words will have on the way in which we digest information.

Like all things, discourse as we know it, language as we know it, is being redefined by social media. This new development in social media has given new meaning to words such as friend, like, tweet, hashtag. These words are more actionable than before which creates new meaning and new communities. This impressive online community and the way in which they communicate in a short 140 character can have a detrimental effect on language. Many of the our short/crafted responses are limited to characters which leaves many of room for grammatical error for example:

The beautiful art of writing and language is suffering due to social media and it’s up to us to be the guardians of our art.

This presentation is a quick introduction into “The Shade Room” blog. The blog offers readers quick insiders to the hottest celebrity news, fashion tips, and unraveling social issues. This blog unlike others such as “Entertainment tonight”, “Access Hollywood” , or even “TMZ” is designed in a way that specifically understands its audience and targets them in a way that has made the blog a huge success.