In the third shoot, it went by quickly due to the fact of studio time but I managed to take few shots of Antonio. He is also will be on the cover of the magazine. I used the white backdrop to give an contrast of his clothing that he was wearing. I used the softbox to give that smooth lighting on him and also used fill light. The model felt comfortable throughout the whole process and I have gotten good photos at the end.

During the second, I had a little situation with the lighting but it came around smooth at the end. I shot Joseph on the white backdrop. the light effect on the background came out nice, which had an gradient effect to it. I also used one light  from the upper left side toward joseph which had a light to dark effect on him, making it slightly look dramatic. overall the shoot went well, all i had left to do was do a little adjustment with the photo on photoshop and it will set to go on the cover of the magazine.

The first shoot went well to be honest. my model was Kelly Thompson and she was comfortable on the set. my main goal was to capture full body and portrait shots for the magazine cover. I used the white background so that she would stand out in the picture and used main light to lit her whole body because she was wearing spring colors which was theme I was going for and I want the colors to be vibrant which I would edit in photoshop.

For the final project my goal is to do a fashion photo-shoot for GQ Magazine. It will be basically showing the viewers and giving tips what to wear during the spring season. majority of the photos will be taken with main light to show the spring colors and details of the clothing that the model will be wearing. I’ll be using atleast 5 models to go through with this project. The purpose this project will serve to my portfolio is that I want the clients to see I’m good behind the camera and getting the job done very well.

This poem by e.e. Cummings is a great example of extended metaphor. On the surface, the poem appears to be about a driver’s excitement to drive a new car. The use of the pronoun “she” could be man’s tendency to refer to an automobile as feminine. Upon further examination, it becomes convincing that the poem is actually an extended metaphor for a man’s sexual experience with a woman, and the woman is possibly a virgin.

The poem “Coming Home, Detroit, 1968″ by Phillip Levine is also talking about a man in a car driving. This poem sets a sad tone especially when they said “A winter Tuesday, the city pouring fire, Ford Rouge sulfurs the sun, Cadillac, Lincoln,Chevy gray”. which could  be talking about the factory smoke is covering the sky to point you cant see the sun and just leave the city to look dark and cold.  The other line was “One brown child stares and stares into your frozen eyes”, which seems that the child is helpless and seeking for better days to come in the city.

Both poems have similarity and difference. For one they both talking about cars in a metamorphic way but at the same time e.e. Cummings talking in a good experience while Phillip Levine is going experience a rough time in Detroit as he watched his city going down the wrong path.

The Chinese Photobook at Aperture

On our first trip, we went to The Chinese Photobook at Aperture Foundation. It shows that  china had a fascinating history of photobook publishing and shows the richness and diversity of the heritage. Each section throughout the gallery tells a story what was going on during that era which was interesting. The way the photographer took photos of the leaders in different angles  gave it a unique look to make the viewers see that leader was strong and brave. Also in my opinion I like the photographer eye of colors which made the leader stand out from background, it was good use of contrast. Overall the gallery was interesting and educational, not only it taught me what was going on during that era but it shows that photography played a great role to capture these events.

As we went to the second gallery, it shows that jimmy nelson is interested doing photography about indigenous cultures. while I look around the gallery the images were beautiful but one of the images that is above, had my intention. What I like about this photo is the use of lighting and also the contrast of the people and the background. Also in the photo he captured the reflection on the water which was a nice touch to add in the photo.

The other piece I found interesting was this one also. While I  was looking at this photo, thought to myself what was jimmy nelson intentions of taking this photograph. To my knowledge he seem to want the viewers to know women are strong, independent and can be leaders. From the color of the women hair down to their clothing goes well together, it gives the photo a good contrast.

For the final project, I plan on doing a fashion shoot. These images will consist my model wearing urban attire. also I want these photos to come out as if you were viewing GQ magazine or any another urban magazines. the goal is to bring good sense of style in the fashion world. There will be use of different lighting to set the mood of the photos but mostly I would be using the combination of  main and fill lights.

The main goals after graduation is start my career working for an company which consist either doing photography, advertising and web. During the past few years of attending this college, I learned the fundamentals of my major and it will benefit towards my work ethic. Having a portfolio is a reflection of myself on what I can bring to the table and I want the viewers to  be impressed on the skills I have gained throughout my time in college.

the allegory of Plato’s cave was described as prisoners being chained and have no choice to watch the shadows of people/animals due to a fire and could also hear their voices. They had no communication to the outside world. Susan Sontag use the metaphor of Plato’s cave to describe the role of photography as the different lighting from inside the cave and the direct sunlight from outside.  She compares the allegory of these shadows to photos and reality, saying that photos are like shadows. 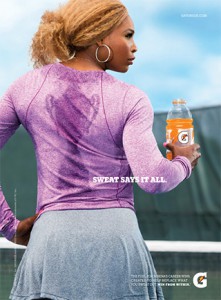 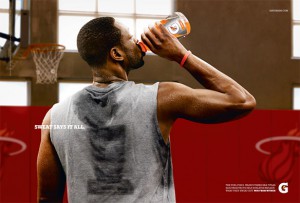 The campaign “Gatorade: Sweat it all” by Gary Land (Photographer), Brent Anderson (Group Creative Director) & Annie Johnston (Art Director ). This campaign message intend to tell the audience to help rehydrate their body quickly and help improve performance and productivity. Gary communicates this message by showing the athletes need to re-energize to continue either playing the sport or practicing for the next game. The images make you feel that you would want to drink this product to keep you going in any sport that you part take in just by looking how the athletes perspire and ready to get back to the game. As you can see the photos are taken from an eye to eye level. The Serena Williams ad photo have an high key which is mostly light tones, selective focus (Serena and the product is in focus while the background have an blur effect) and also the type of lighting Gary used was front light. On the other hand, Dwayne wade ad have high contrast which have light and dark areas, sidelit lighting and selective focus (the athlete and the product is sharp and as you can see the Miami heat logo and basketball hoop have a soft blur) . Personally these photos Gary land took are both mirror and window and the reason for that is; the audience  who are viewing the ads can relate and feel what these athletes go through on a daily basis to increase their performance . It gives people a positive message to motivate them push to their limits further and exceed their goals to have a good performance on the field for the world to see.

In the first picture Mirror is taken place by the women looking at her reflection of her daughter, which is in the vehicle. The photo has an overall dramatic feel to it, just by the way the mother looking at the daughter with disappointment. The lighting also gives that dramatic feel which comes from side; shadows casts to side with mostly light tones.

The second picture also show mirror which show emotion of the child, and it shows the distance of the two children from each other in the garage showing depth. The first child seems to be eager to look for someone.