I was not able to take any shots this day for two reasons. One was that all of the shoot areas were taken up and the other was that I needed to put more time in to the Photoshop part because I was having is sure with skin textures but then fixed it after awhile.

Well the idea was to get a side portrait profile and a back shot. I had a problem trying to get both because one model ended up being a model with other people at the moment I needed the subject so I didn’t want to bother her. The other model, was actually pretty tough to choose because I didn’t know who would be able to do a bare back shot as in taking their shirt off. I found a model that came in for another person that was will to show her bare back with no problem. I think the shots I got of her were great and I don’t there was a better model for it. Today was more of an success than a failure.

My thoughts of todays shoot is that everything went well. I felt that the set up was pretty easy to mess around with. I felt I got my shots pretty quick, the models did great and I didn’t need to do extra shots to get what I wanted. Next week, I will be using different models but the same lighting and the same set up.

For my final project I will create create cyborgs from different models. I will use people in the class as the models. Each model would be posed differently and I will photo manipulate different pat of the body of each model. Light will be focused on the body parts I will be focusing on. I will take pictures of mechanical pieces to incorporate in these body parts. I will take pictures of metal textures. The purpose of this going towards my portfolio is to use it in any campaign or posters. To also show the other skills that would be useful in other designs.

My opinion about the e.e. cummings “she being Brand” poem, is that the way the is describing the way he feels when he is in this brand new car. This poem has a sexual theme in between the lines if you read it carefully. There some lines that can clarify this like “i touched the accelerator and give her the juice, good”. In the other poem “Coming Home Detroit, 1968”, my opinion is that he also describes the way he feel when he is driving a car made in Detroit. In this poem he expresses how driving in a car that is manufactured in Detroit gives him a visual of how he saw the city of Detroit in 1968, with people outside on the streets with “charred faces, the eyes boarded up,the rubble of innards, the cry of wet smoke hanging in your throat”. The way I find these two poems common is through the way both speakers describes their emotions through driving their cars.

Plato’s cave was about giving seeing the shadows and hearing the object behind the prisoners that are staring at the wall. Susan Sontag uses the metaphor of Plato’s cave to describes how the role of photography compares itself to life. Sontag talks about how photography give us a way to look at the world through images. Photography gives us a way to see the world in different perspectives and to also experiencing the moment from what we observe from the image itself.

Judith Williams argument is about how Advertisements that has a specific look when it is designed for a specific product and expect a certain response towards it, is compared to ads that is for the same type of product but gives it a different image on how it is portrayed. Williams describe how in the Chanel ad, they gave it a feminine look with a french beauty, while in a different ad with the product Babe, same type of product, is being shown with a tom-boy looking female doing martial art representing a perfume product. I would agree with Judith Williams because some ads shouldn’t be on a one way track, there should be more options to help with a more broader audience. 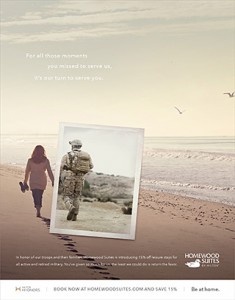 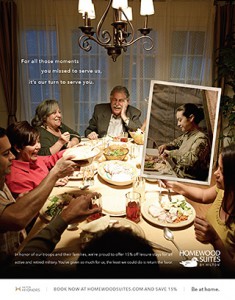 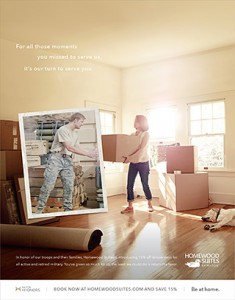 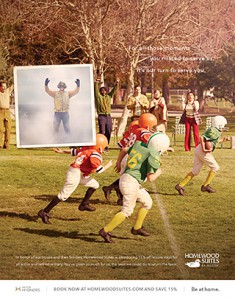 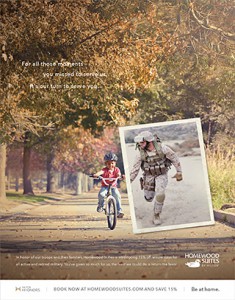 The intended message in this campaign is to show your service to the people that are serving the country for us in the army. Every photo has a happy scene in it with a photo of their family member in their army attire in certain movements to make it seem like it they are their in that moment to enjoy that experience with their family. What this campaign gives a sight of sadness because of all the family things that the person, that is serving in the military, is missing the family moment. The message is to show how you should treat the people that is serving your country. In 4 of the campaign pieces has a high key tone and contrast to give a very light heart feel .to give the scene more emotion towards happiness. This campaign is more towards a romantic type of scenes. each part of the campaign show’s a lot of enjoyment in certain situation if their loved ones was there with them sharing that moment with each other. Each one of those moment shows how the people in these photos would of enjoyed that moment if their loved ones was there with them.The message is clear enough that it means to bring home the troops because the fact that they put up their lives for our country, they deserve to come home and enjoy the moments with their families company.

What I think mirrors photos mean is something that you can relate to and be experiencing at the same time. Such as in Crewdson’s photo, the high contrast from the headlights of the car in the middle of the night glaring at the daughter standing in front of the car gives it a very dramatic affect. With her mother standing aside her car with a very distinct look on her face gives an emotion the expresses anger and the way the daughter in her underwear shows shame in the way her body is slanted over like if she has done something wrong. Crewdson’s photo shows emotion and meaning that would clarify it as a romantic photo.

In Winogrand’s photo can also go for a mirror photo because it kind of does give emotion. The photo looks very gloomy and sad. The photo looks very sad, the two boys look alone, stranded in the middle of nowhere, giving it a very gloomy depressing look. the two boys give has a sad expression on there faces like if they are looking for someone to comfort them but no one is around.

Both photos has a feel of depth