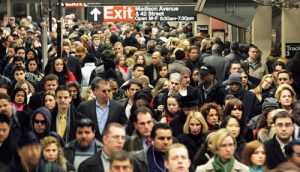 In the 1880’s a new roadway system was born for Brooklyn, it was called the Brooklyn City RailRoad (BCRR) and was the oldest and largest railway system of its time. The old headquarters resides on the corner of Furman Street and Old Fulton Street and is still a prominent building although the line’s discontinuance in 1930. Now, the tracks are still partially visible through the cobblestone streets; showing what was there prior to the rise of other means of mass transit. Although the trolleys stopped running, the history of the archaic system remains engrained into the current culture of transit. Just by looking at the rails you see something more than random exposed metal. You are greeted by New York City, they tell you a story in this greeting. “We are strong and resilient,” they elucidate. “Regardless of the harsh winter blizzards, the extreme heat waves of the summer, the constant trampling by FedEx trucks, or people jay-walking passed us, here we lay, as we always did, with pride and tenacity. Like a weed that can never be plucked or a bird that will never cease to grace us with its musical whistle, we stay here to watch as life moves on around us.” 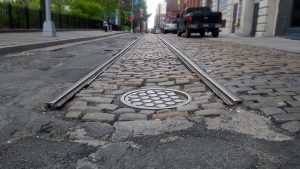 On July 3, 1854 the first route began its loop, the Myrtle Avenue Line ran from the Myrtle Station to a stop adjacent to the Fulton Ferry. The system started as a modified railway for the time; in that particular time space it was called a horseway since the trolleys were horse-drawn. This horsecar trolley ran along the same line that is now the B54 MTA bus. By 1867 there were twelve different routes and approximately twenty-two million people used the transit system. According to a 2015 government data overview, about twenty-two million people use the MTA in just two business days as opposed to the 1867 review. As time progressed, the use of horsecars slowly declined and the rise of streetcars prevailed. By 1897 there were 27 railways that were stationed in the Brooklyn Heights section of Brooklyn.

Because of the proximity of the railways, the BCRR headquarters resided along Fulton Street (or as we know it, Old Fulton Street). The building was built in the early 1860’s and controlled/managed the railways. Offices filled the walls, behind the red brick exterior. The molded cast-iron was styled in a neo-classical style, vying to portray the nobility, control, and power that it held in the community. Somewhere along the years of the Depression the business lost its control, commercial use, and patrons and the BCRR eventually declined in popularity to the public. 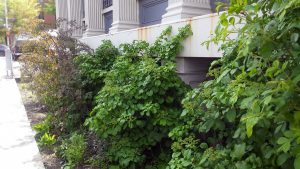 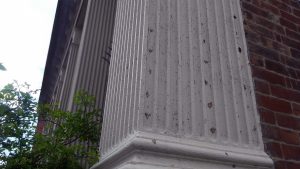 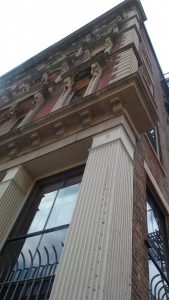 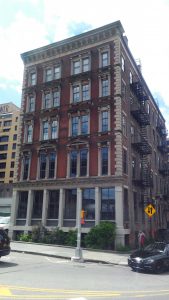 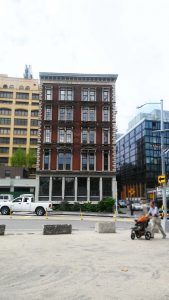 In 1975 the BCRR was used as a factory until architect, David C. Morton II, took on the project to make the space residential. As of 2009 the building was named a New York Landmark and is currently still used as dwellings. 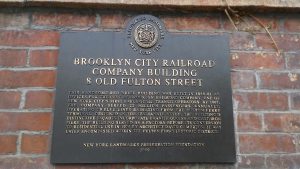 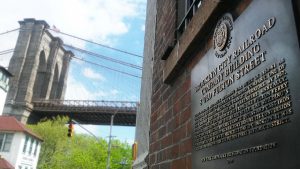 Some of the rails are still visible through the cobblestones and concrete. If you are interested in seeing it for yourself take a walk down to the corner of Furman Street and Old Fulton Street to see the headquarters, then walk to the corner of Main Street and Plymouth Place to see the old rails that sprout, bevel, and vine their way through the streets; just keep in mind that they are over 150 years old. 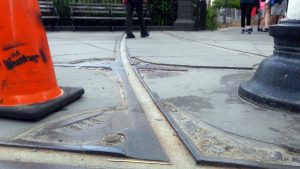