Today, a wet and icy mix falls from the pale sky. The sun is casted by thick clouds of vapor accumulation and their secretions cascade down on everything below. Ultimately baptizing New York City in the side effects of a cold front colliding with warm. Everything gets washed away at one point then it freezes over; preserving the dirt and grime that lies beneath it. It will never see the true beauty of pure daylight that could potentially grace the city since the clouds stay well passed the sun’s departure and the moon comes out to play. As dusk rolls in like oceanic waves, the sky deepens; getting darker and darker by each minute. Our eyesight acclimates to the new surrounding as we acknowledge the absence of pure sunlight. Artificial light pours from street lamps, in different shades of orange, yellow, and fluorescent white. We’ve missed the daylight for so long; our skin craving to be kissed by those beautiful rays of light and warmth. What it is the power of light? What is it about light that makes everything so special and important? It has the potential to make the most beautiful things undesirable and the most ugliest of sorts seem so lively and stunning. As we live through the last few weeks of short days and long nights, we have to find a way to survive without the sunlight that we adore so greatly. 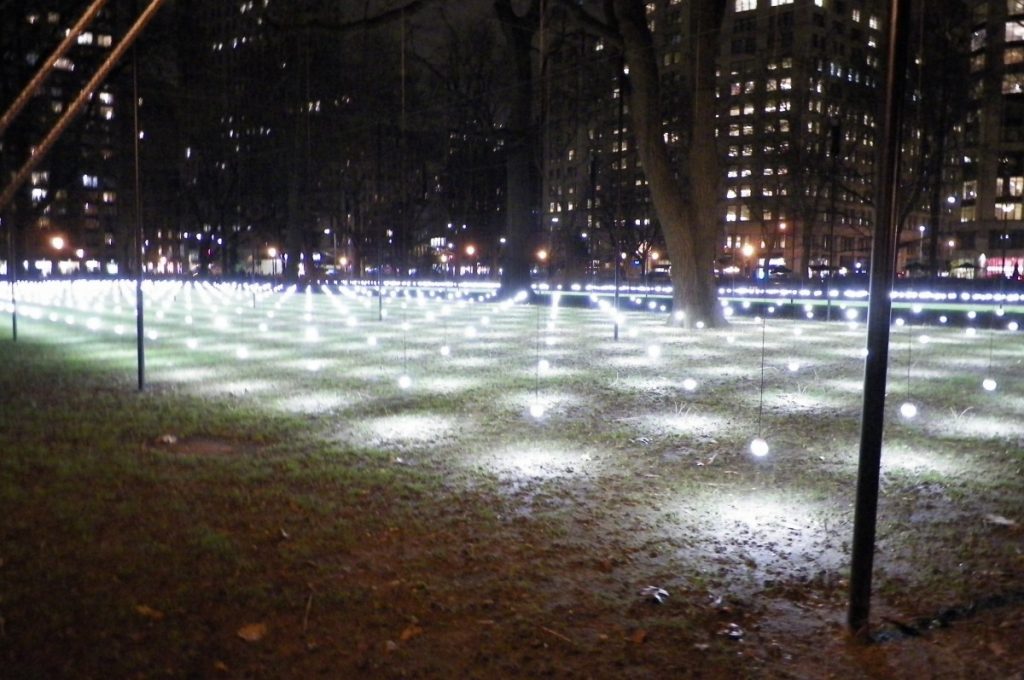 To aid us in our imminent imagination, we have 19,800 square feet of light that illuminates the cold grass on Madison Square Park. 900 golf ball sized spheres seem to hover over the icy compacted ground in the wake of the sun. They angulate in a certain premeditated rhythm. The light appears to move through the spheres in the form of an optical massage. The pattern fades in and fades out, goes fast then slow, makes twists and turns, and switches from one space to the next. It’s beautiful and the most relaxing thing to watch in that part of the city. Surrounded by taxi horns, rude New Yorkers, the everlasting darkness, and harsh lighting from the city, Whiteout creates its own definition of nighttime in the city and ultimately celebrates it. 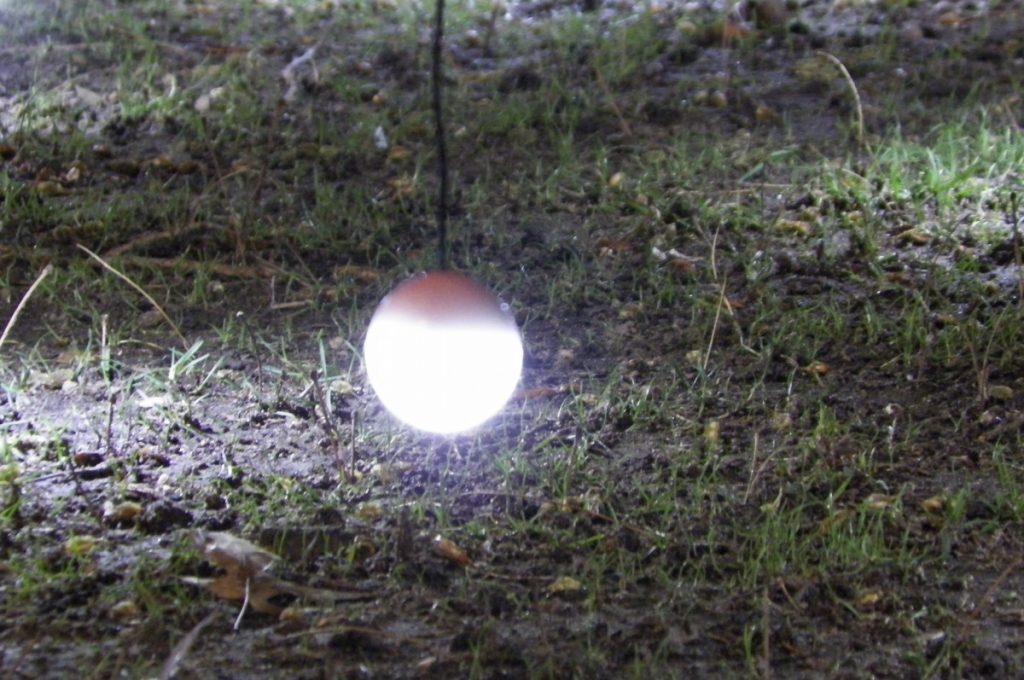 Whiteout was made by Austrian born artist, Erwin Redl. He now lives in New York City, making artistic light installments for building facades. He went to an performing arts school in Austria named University of Music and Performing Arts, Vienna studying electronic music. Redl then came to America and studied computer art at the School of Visual Art, here, in New York City. After graduating in 1995, he was a featured artist in the Whitney Biennial 2002. 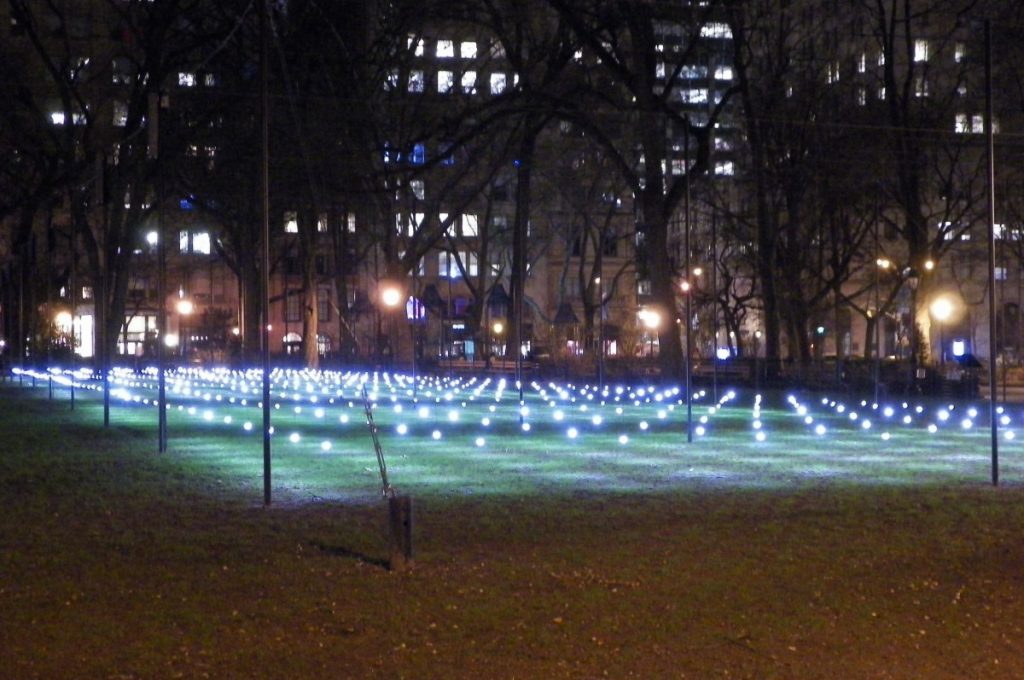 Redl explains that this piece was inspired by the darker and colder months of winter and how the grand scale was odd for such an urban setting like NYC. He reports in a press release which can be found in this Architectural Lighting article, “I am intrigued by the Park’s option of a large-scale installation that blurs the border between the virtual and the real. The physicality of the swaying orbs in conjunction with the abstract animations of their embedded white lights allows the public to explore a new, hybrid reality in this urban setting.” 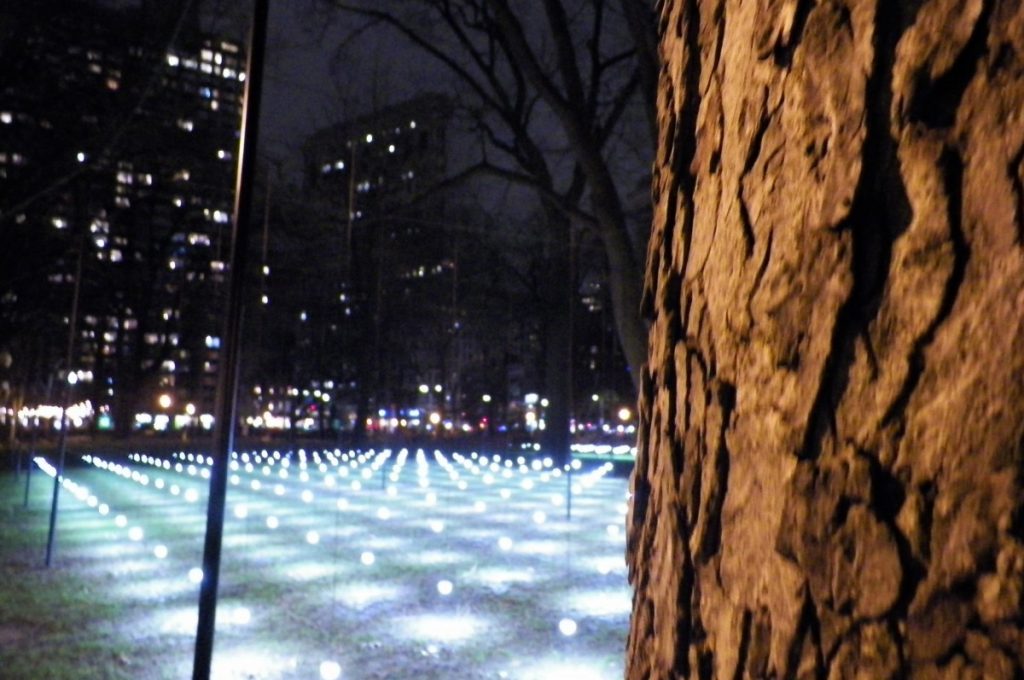 The two beds of lights are built with a steel frame which hangs each light a foot over the ground. The cage is 12 feet tall. 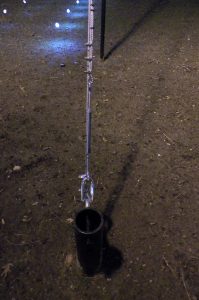 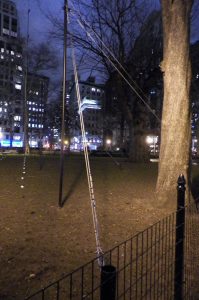 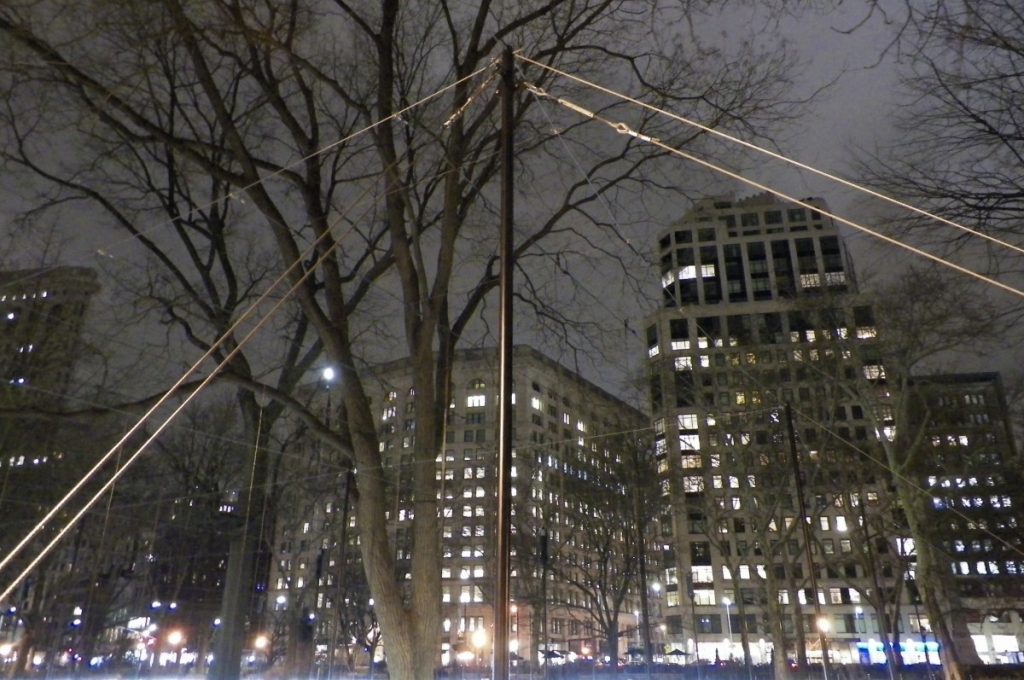 Whiteout has been on display since November 2017 and will remain until March 25, 2018; which is five days after Spring would have begun. Enjoy it while the last weeks of winter graces us with its brutal beauty.