A sunny weekend was all it took to persuade many New Yorkers and tourists to Central Park. Families filled the park as the warm sun shined. High-pitched squeals and bursts of laughter filled the air as children played in the playground while others enjoyed a game of hide-and-seek throughout the mounds of rocks and beveled grassy areas. The wind moved swiftly around the trees, whipping through everyone’s hair towards the directional current. Soft music resonated in the air; all different, and coming from opposing directions. I decided to follow the music that sounded like it came straight from a music box. It echoed from the other side of a dark tunnel. Was this the beginning to one of those circus-themed horror films, or was it actually something pleasant? The saccharin happiness made me skeptical as to what the calliope music was actually for. As I broke through the tunnel’s sight-line, I saw what droves of people were being called to… The Central Park Carousel. 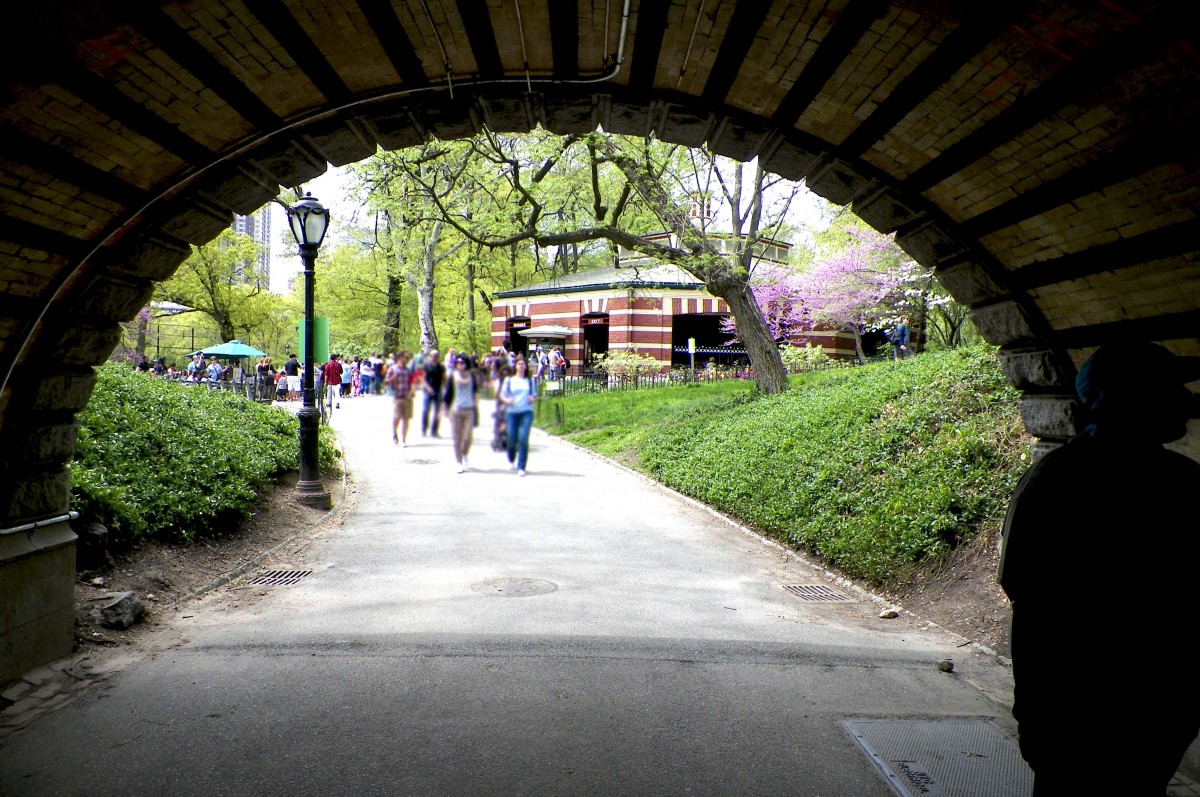 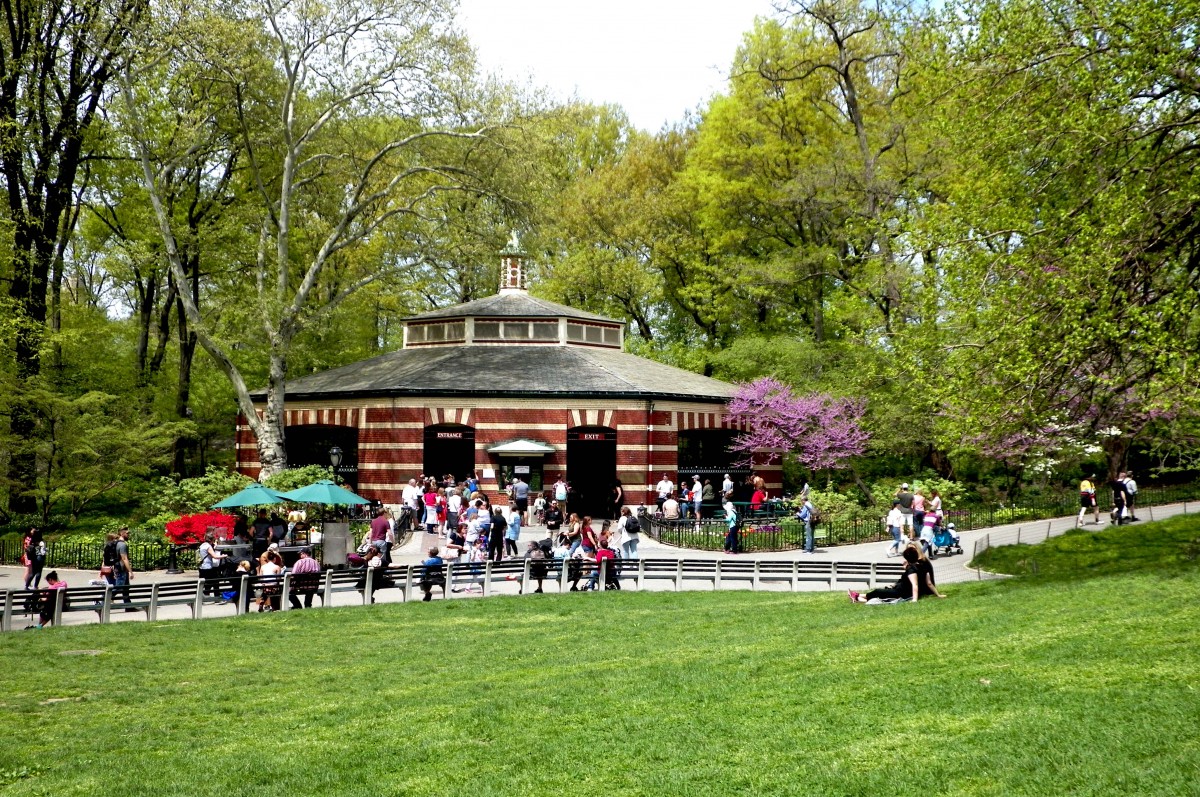 The inanimate horses spun around in a circular motion while hinging up and down, just as they did well over one hundred years ago. This carousel is actually not called “The Central Park Carousel”, legally it is called “The Friedsam Memorial Carousel.” According to NYC Parks the carousel is the fourth to be set in Central Park since 1871. The first was placed at least thirty feet away from the carousel that stands today. This was before the rise of electricity, so it was powered by REAL horsepower. The horse (or blinded mule) would crank the Merry-go-round by walking in a circle while tethered to the central pole. The crank would be below the passenger level and would be commanded by the operator stomping on the floor boards to signal start and stop.

It only cost 10 cents to ride back then, but that much money amounted to a hour wage of the average working class male in those days. In comparison, imagine paying Six Flags admission for a ride on the carousel that lasted less than three minutes. Would it be worth it? By the time of 1877 the Central Park officials decided to lessen the price to 5 cents. In 1907 the carousel was replaced to an electrical system and by 1924 it was destroyed by an unfortunate fire. A new carousel was put in its place but was scorched in another fire in 1950. The park had to replace the beloved carousel since the public highly valued it. 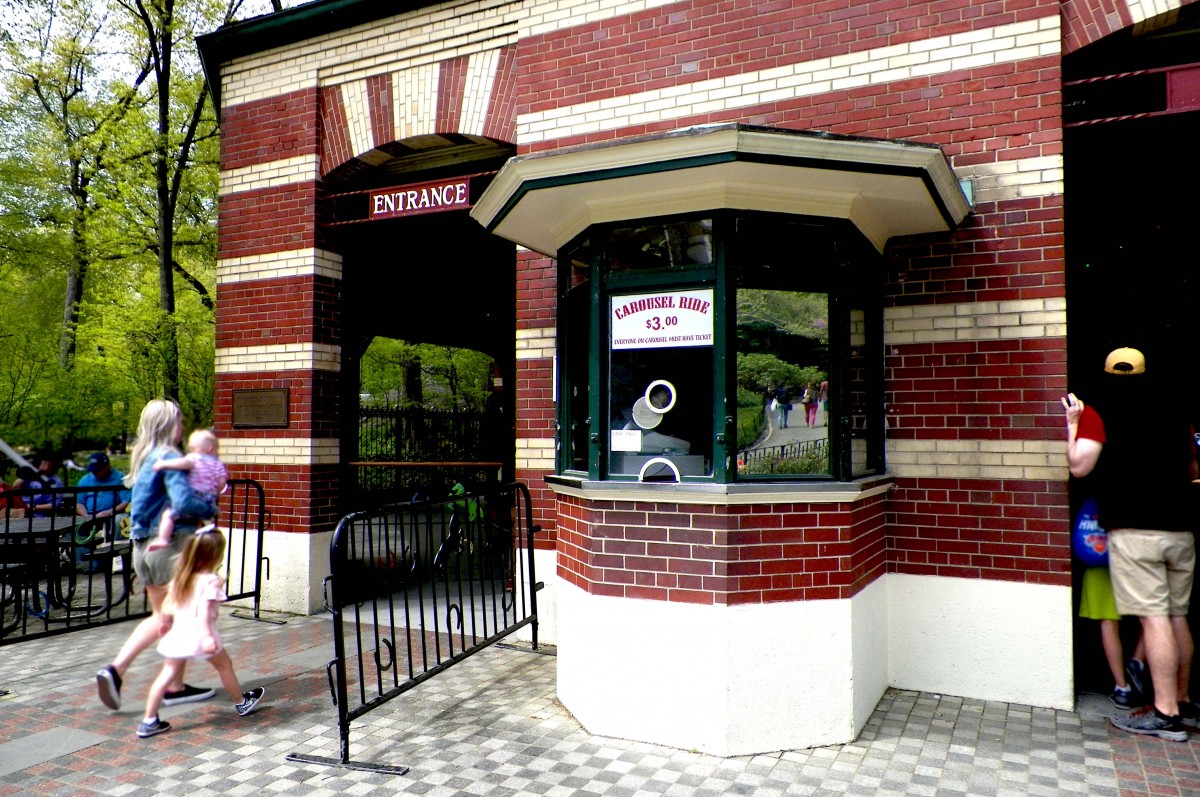 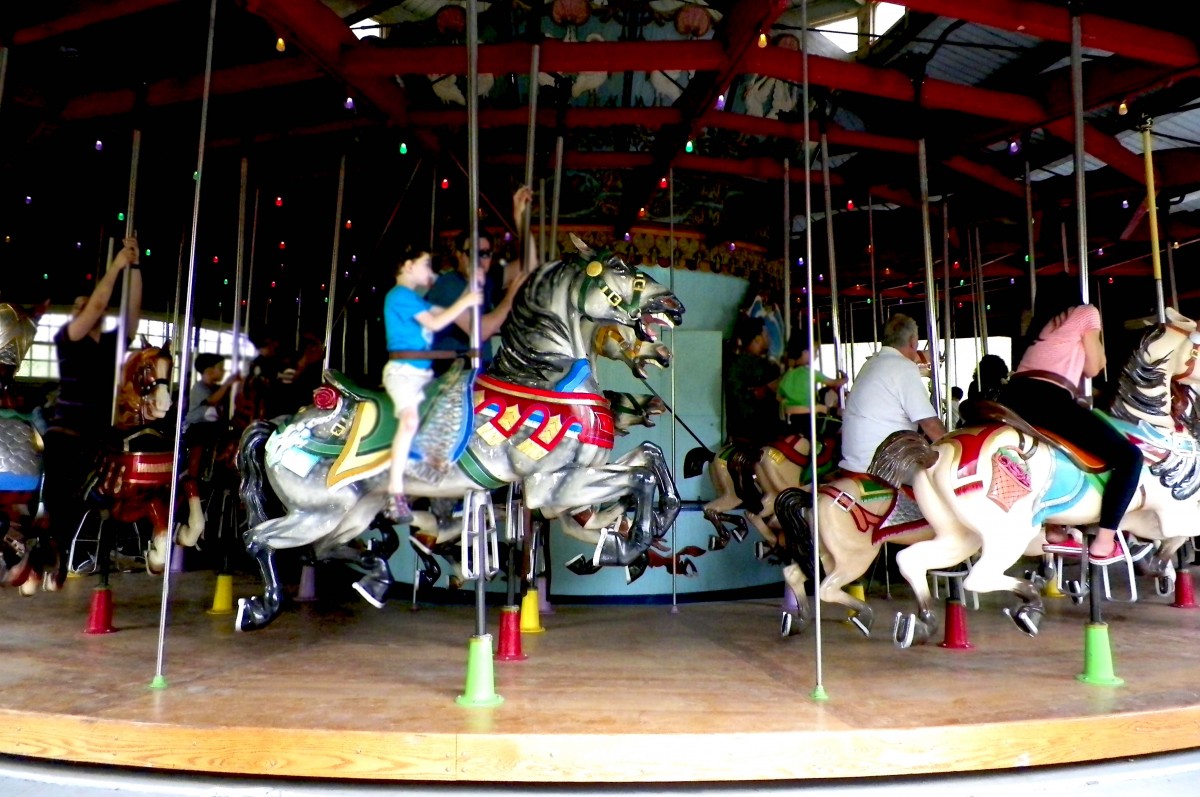 The fourth, and current, carousel was donated by The City of New York since the Board of Transportation found it, abandoned, in an old BMT transit line, that they acquired, near Coney Island (based on one of my Coney Island posts, it was probably left as an experimental amusement park ride). The Friedsam Memorial Foundation also donated 75,000 dollars to restore the found carousel and place it in Central Park; which is why it’s named after the foundation. 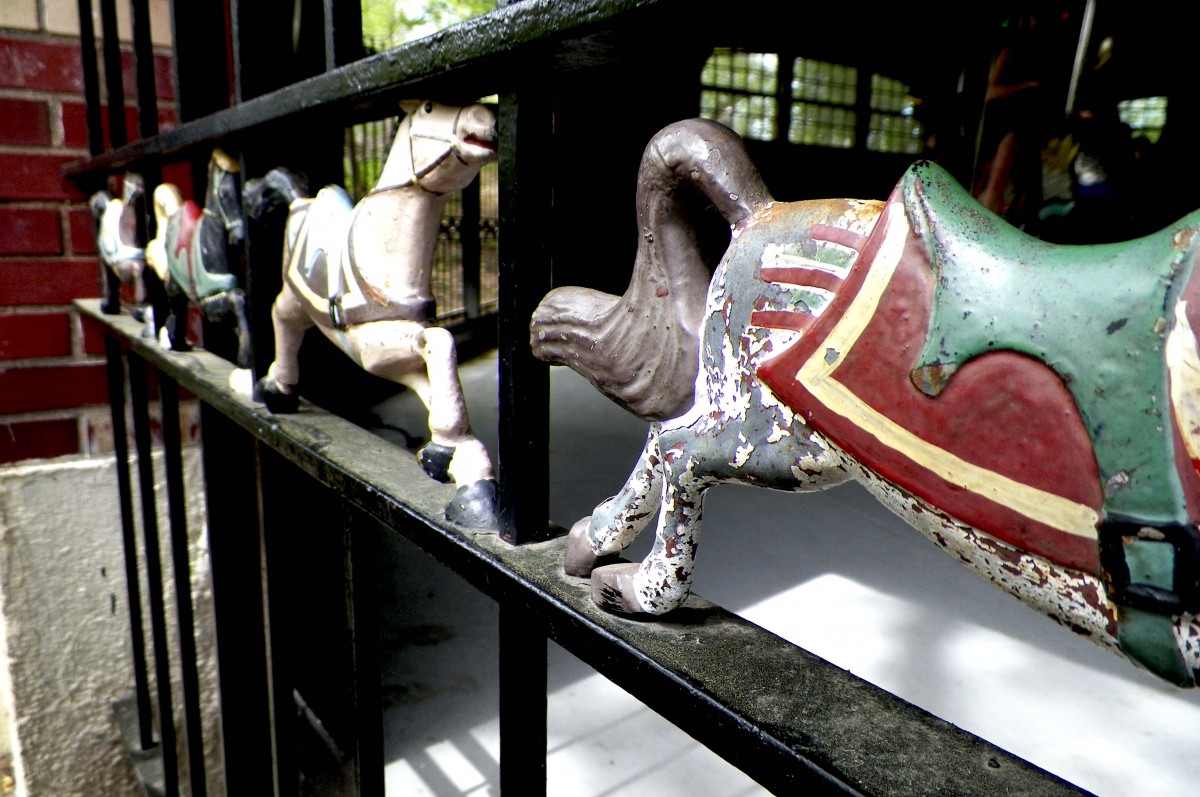 This carousel was built in 1908 by, artists, Sol Stein and Harry Goldstein with tremendous help from The Artistic Carousel Manufacturing Company of Williamsburg, Brooklyn. It features 58 hand-carved horses (there aren’t any horses that are the same!), and two horse-drawn chariots, on a turntable 50 feet in diameter. After all these years the carousel still chipperly goes round in a circle, amusing over 250,000 riders a year. 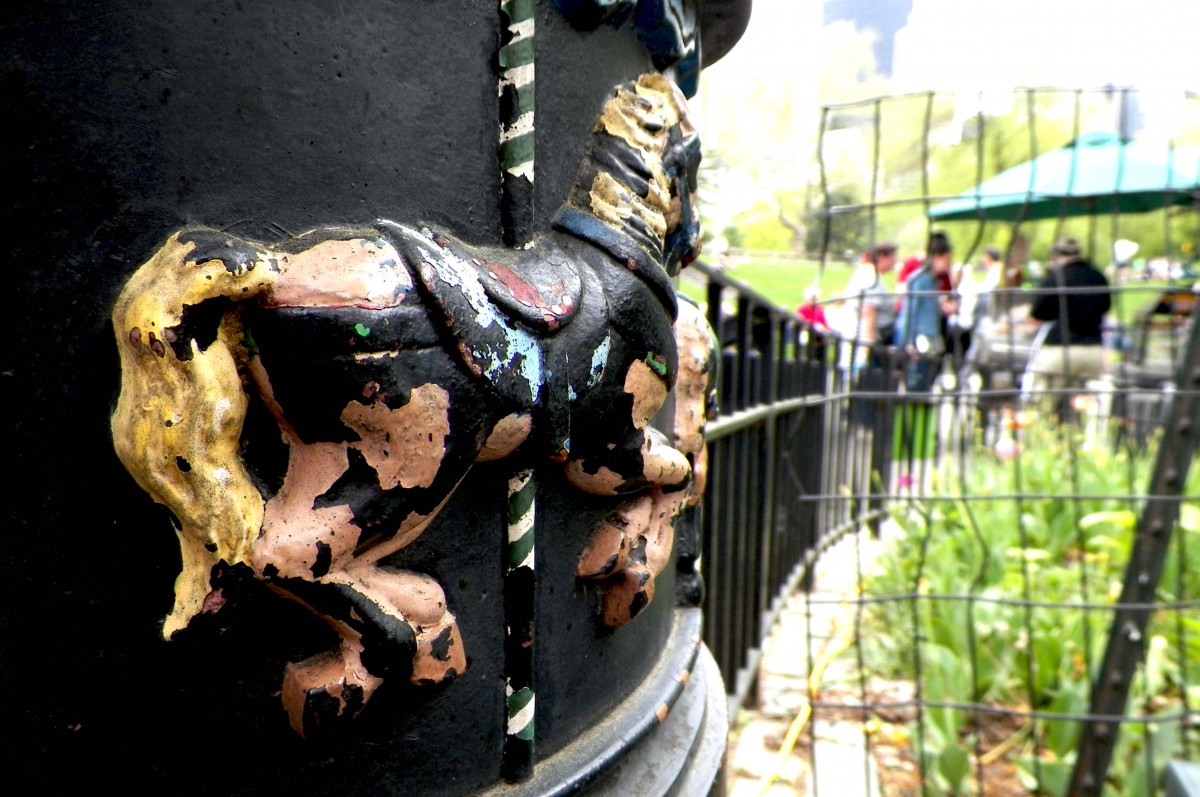 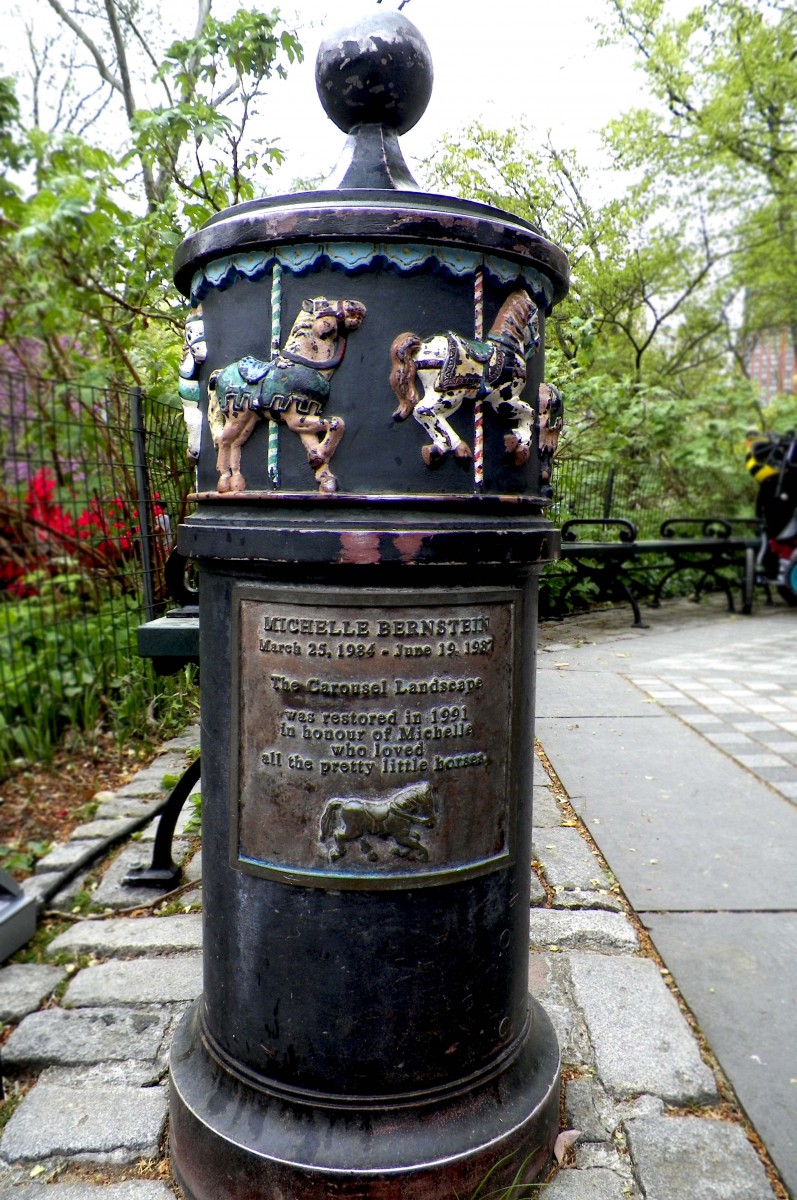 Today, the cost to ride is only $3; honestly, I’ve had Starbucks orders larger than that. So if you are looking for something cheap and amusing, try the Central Park Carousel; it won’t disappoint. Even though the part of the park is called “The Children’s District”, it’s not only for the children, but for the child in all of us. 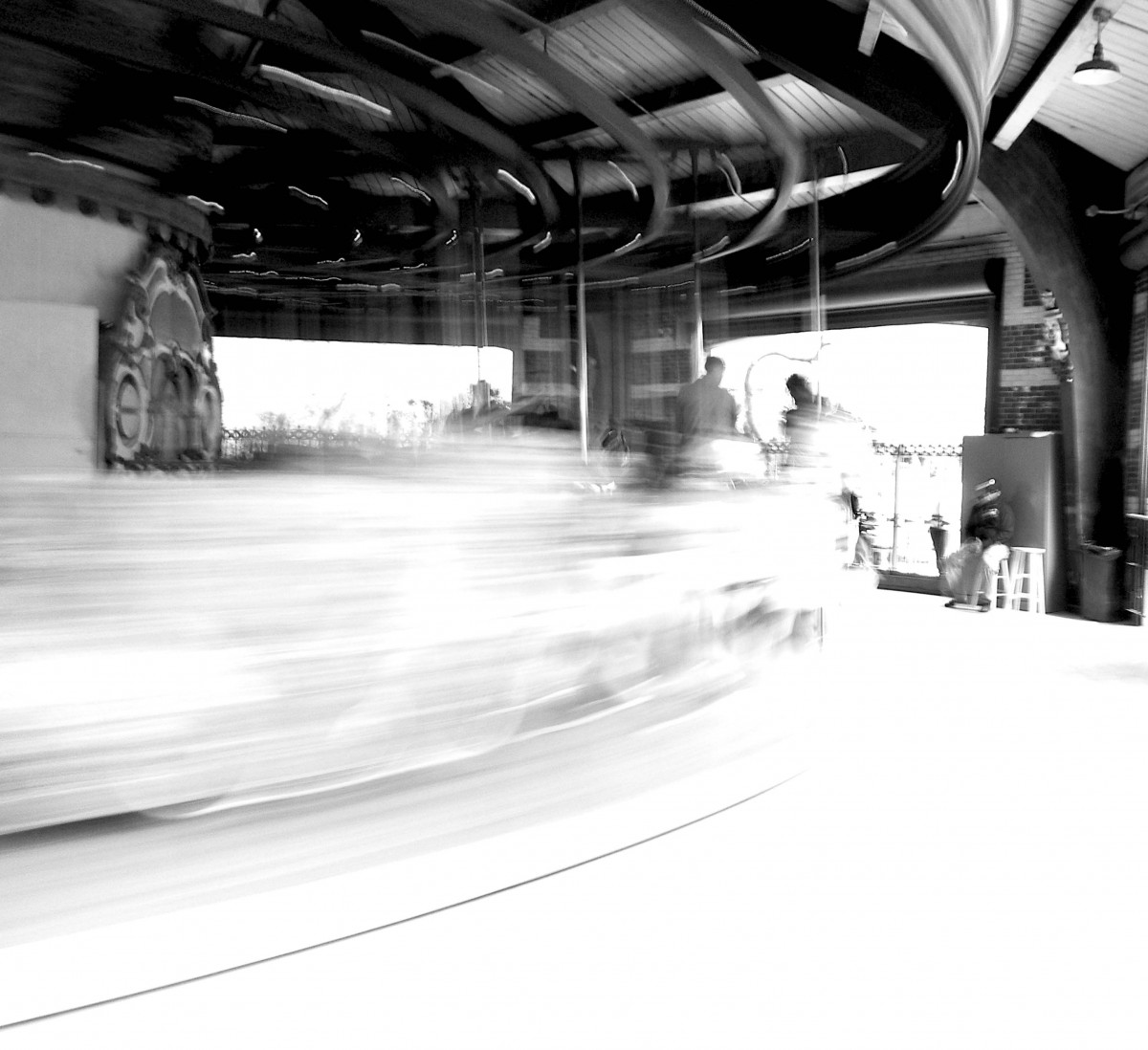 Tune in next week as I continue the theme of different carousels in this beautiful city!

Interested/appreciate ice carving? Well here’s an event for you!

Next week, Saturday, February 11th from 3:00pm – 7:00pm, Central Park will be hosting their sixth annual Ice Festival. Artist from the Okamoto Studio will be present using materials such as electric chain saws, chisels, and “picks” to over six thousand pounds of ice replicating statues around the park!

This event is FREE of cost! That’s right, you get to see artist carving ice live for free.

I look forward to following up and informing you guys on how the event went! If you’re interested in joining me on this adventure let me know!