This article was very interesting to me. It discusses taking the fastest vs the most beautiful route to your destination, and what people would prefer. Also what people consider a beautiful route. They talk about an app that would give you the route to your destination, either the fastest or the most beautiful one. Since the app we now use usually only give us the fastest route. I did keep thinking that this didn’t matter because everyone has their own sense to what would be beautiful. But they id a survey that had two different pictures asking people which they considered more beautiful.

I’m not sure what I would chose because it depends on the situation. If I’m late or a bit early to class I’ll still go unless I’m an hour early, then I’ll take my time and maybe take a more scenic route. What I could say is a beautiful route is any calm areas where there aren’t many crowds, or in some cases an area can look very beautiful but also be very crowded. Walking through a park, any well known spots, or anywhere that there’s just a lot of nature is very calm and appealing to me.

I enjoyed this project because it involved walking out to a new place. It was really interesting to learn about juxtapositions. I really got to know areas near the school more. I thought finding overlapping New Yorks would be hard, but it wasn’t as hard as I thought. What I could improve more on the project is how I describe what I see by sight or any senses. I also need to improve on my quotes and showing how they support my essay’s thesis more, I might not have elaborated on them much in my essay.

The field trip to the BRIC Art museum was very interesting and fun! There were a lot of different varieties of art pieces there. Everything was so unique and stood out on its own. One of the interesting things I saw was the chains hanging from the ceiling. It happened to catch my eye a lot. It could probably resemble someone being trapped inside. Another piece that caught my attention was a wall that had many different strings/threads. From afar it looked like it was a bunch of hair on the wall, but it really tricked my eye. As I got closer I realized it was various types of strings and such. The television studio was one of the very interesting parts for me as well because I have an interest in video production so it was great to see the behind the scenes of the production in an actual studio. Then of course there was Professor Spevack’s indoor outhouse. It looked amazing to see how it was built and put together. Also going inside and drawing what I heard in the dark was very interesting. 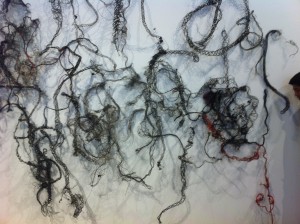 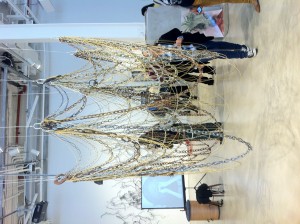 The field trip to the Center for Book Arts was very interesting and fun! I learned a lot about printing. From how it began to how it evolved and is what it is today. I found it really interesting how back then people had to get the letters one by one to create something to print. Looking at today’s technology there’s a lot less of a struggle for an issue or to get it done in general. If there was a typo back then you would have to do a lot of work to get that one letter out and replace it. Now it’s just simply an one second task with the keyboard. The zines exhibit was also very interesting. There were a lot of pieces that stuck out to me. One of my favorites was this fake newspaper with interesting headlines. It was called Daily Cardinal. I wouldn’t believe what I’m reading if I actually saw some of those headlines in the newspaper! It also did have articles on the headlines that were on the cover. On the second part of the field trip to the Rubin Museum I found all of the works of art that I saw to be very cool. The ones that I sort of got the meaning behind were very interesting pieces. I chose to sketch the piece called Hunger. It’s a picture of a man eating a snake while at the same time the snake is eating its own body. From what I read in the description of the piece the snakes body seems to be never ending while the man is eating it. Francesco Clemente also symbolizes Eastern and Western traditions in his piece. Both parts of the field trip were very fun and I can’t wait for future trips!

In project #1 I wrote a bio about myself. Mostly about me as a student and what inspires me to do what I do. I talked about my interests and such. By working on this project I learned a lot about what I need to work on in my writing. I also learned that organizing your essay before you write it is very helpful. My bio probably would have ended up as being all over the place if there wasn’t an outline for it. I’m most proud of the details I included even though it could still use a little bit more details. As for any other improvements I really want to improve on my use of vocabulary in my work. What was helpful during this project was the feedback from my peers. It really helped me to get the final piece done. If I didn’t have any feedback my work wouldn’t have improved very much from the draft to the final piece. I wish I had spent some more time on this project. What I spent the most time doing was thinking of what details to include into each paragraph and figuring out if it belonged there or made sense. I definitely need to work on time management though. I’m hoping for future projects I can put more time into them and have a great outcome!