3. Alms: Things given to the poor

Hello! My name is Priya Maharban and I’m 17 years old. I’m a freshman at City Tech. My major is communication design. I have a huge interest in art, which is probably obvious. I like to draw cartoon characters sometimes. I also have an interest in video production. I love to shoot, edit, and produce my own videos as a personal hobby. I’ve been doing so since I was 11! I’m also a gamer! I’m mainly a Nintendo person, I really love Pokemon, but I love all of the Nintendo franchises as well. I’ve been playing video games ever since I was a kid. Video games inspire me to draw more things and boosts my creativity sometimes to keep me going.

My avatar is a picture of my favorite Pokemon, Ampharos! It’s also a fan made drawing that I found which to me is really cool because I love to see other peoples works of art. Especially when they have to do with any cartoon or video game characters! It also shows my love for art in a way. Most people would probably see my icon as an anime or video game character, which is the sense that I’m going for. Video games and especially Pokemon is a huge interest of mine that most people should know I have!

I can see my avatar being misinterpreted. Someone might be completely lost as to what it is, they might not recognize it as a cartoon or video game character at all. They might even think it was just a completely random picture that I found on the internet. I do think that most people would get a sense of it being related to one of those two or anime too. Most people wouldn’t focus on the picture too much to notice that there’s a purpose for it being fan made either. Some people who do actually focus on the avatar might get a different meaning of who I am since the background doesn’t really have happy bright colors. When the background doesn’t really mean anything towards my personality.

The purpose of my avatar is to hopefully show people that I’m a fan of Pokemon, if they do recognize the character that is. If they don’t I hope they would think it’s probably from an anime, tv show, or video game because that is what it is! They would hopefully also see a purpose in me choosing a fan made drawing over an official picture. I did that to show my interest for drawings and art in general. 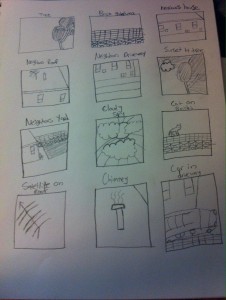 As I look out of my window the main thing anyone would notice is my neighbors house. From the view of the side of their house through my window, I can see one side of the slanted triangular roof. On the roof I can also see the chimney and a satellite. The roof is a gray color while the side of the house is a very light pink siding. I can also see three windows of their house. I can also see a short brick wall that separates the neighbors yard from mine. It’s not really a wall, but it’s also not really a gate. It’s probably just 3 feet tall. It can be easily jumped over. Being that the view from my window is the side of my neighbors house, I have a view of their drive way which has a cement ground. I can occasionally see either one of their cars or the cars of their children who are grown adults.

Moving away from my neighbors house, in the background I can see a huge pine cone tree. It’s in the yard next to my neighbors. That tree has been there since my family and I moved into this house, and I moved here when I was about 2 or 3! It has been there for ages. In the evening the sunset looks amazing with the tree in the picture. That’s pretty much all I see out of my window. It’s not really anything that changes everyday other than seeing a car in my neighbors driveway or it being empty. I can occasionally see a cat or squirrel walking along the brick wall, but that’s about it. I get the feeling that there’s a lot left to explore in the world outside of my window and there definitely is!