Etymology – etymology means the study of root of linguistic change, especially as manifested in individual words.

Polysemy – the ability of a word to posses several meaning.

Assonance – the repetition of the sound of a vowel.

Anchorage- frequent function of the linguistic message and commonly found in press photography and advertisements.

mythical idea of Life. it means that the linguistic nature image is being presented again and finally it takes action

The linguistic Message, Denoted Image and Rhetoric of the Image.

1st message is produce by the image and linguistic is the medium and captions, labels and marginals supports the linguistic.

The linguistic message is a sign or indication and suggested or the concept.

The reading discuss about the sign stages that the first sign of the image is idea and how it represented the product. Second sign talks about the it is more or less equal to noticeable to bring together the signifier for the product. As they explore the image, they discover the two other sign. 1 is a collection of different  object that transmit the idea that is different service. In other sign, it is about the composition of the image that is an illustration that express in other language is “still life”.

Denoted Image is that image is speaking the distinction between the literal message and the symbolic message and it is operational.

Rhetoric of the image is where the sign of the 3rd message were message cultural that  on and off when the signifier become enlarge over the whole image however a sign is separated from the others than the composition that carries a set of principals of signified.

Please note that we will have a full Webex class session on April 14. (Spring Break is shortened because of the Recalibration Period.) You should complete the Roland Barthes reading and post your notes before the 14th.

The second short paper is due on April 21, and there will also be two short texts to read for that class. I will assign the texts in class on the 14th. Please use the time until then to work on the paper and to research your Final Project.

PAPER
The second 2-3 page paper is a response to Roland Barthes’ Rhetoric of the Image. The objective for this paper is to analyze the rhetorical elements of a recent advertisement. Ideally, the ad should be from a print magazine.

The advertisement should use photographic imagery, and should include text. Begin by describing the image in as much detail as possible, examining the characteristics of the objects, models, environment, etc. pictured; and the layout, typography, interaction of picture elements, image quality and composition of the entire ad. Try to identify all of the signs at work in the image.

Make your best attempt to articulate the meaning of the image, using Barthes’ terms. What is the linguistic message? What are the non-coded iconic messages? What are the coded iconic messages? Identify the denotative and connotative aspects, the use of anchorage and relay, the semantic and lexical components, etc. Consider the effectiveness of the advertisers’ rhetoric, and the ideological metalanguage employed.

This response will be submitted as a 750-1000 word typewritten paper, double-spaced in 12 pt. Times New Roman. Include images of the advertisement under consideration and any other relevant illustrations. All references and quotations, including image sources should be properly cited in MLA format. Upload a PDF to a new Post on OpenLab before class on the 21st.

a have one question from the reading in the first paragraph. in the beginning. and I saw something like mega or metal language or linguistics

etymology: the study of the origin of words and the way in which their meanings have changed throughout history.

agglutination:  a mass or group formed by the union of separate elements.

phonemes: any of the abstract units of the phonetic system of a language that correspond to a set of similar speech sounds (such as the velar \k\ of cool and the palatal \k\ of keel) which are perceived to be a single distinctive sound in the language

ineffable: incapable of being expressed in words

ontology: a branch of metaphysics concerned with the nature and relations of being Ontology deals with abstract entities.

quasi: seemingly; apparently but not really.

polysemous: Having or characterized by many meanings, as the words play and table.

1st message is linguistic ; the captions, the labels. being inserted in the natural disposition of the scene In Western art history, ” en abyme “( is a formal technique of placing a copy of an image within itself, often in a way that suggests an infinitely recurring sequence.)

2nd message is the pure image ; provides various signs aka the signified (return from the market which is a signified itself that implies the freshness of the food and the preparation of the food to make a meal.) Another sign is the the tricolored foods (red, green, white)which are the signifiers, and Italy would be the signified.

3rd message is cultural, the composition of the vegetables and the can and spaghetti in the markey bag are composed in a manner that looks like a still life.

Barthes believes that in mass communication, linguistic messages are in fact omnipresent. It buried into images, such as captions attached to illustrations, subtitles on films, dialogues in short films, etc., writing and speaking continue to dominate the functioning of information structures. For the connection between images and verbal messages, Barthes proposed two concepts, anchorage, and relay.

As a means of reproduction, images do not objectively and fairly reflect the real world. Their meaning has yet to be further stabilized, decoded, and interpreted. Images can also be regarded as the perspective of the photographer to understand the world. When analyzing an image, it is necessary for the viewers to consider both the social and cultural context of the photographer and the context in which the image is applied, so as to understand the cultural meaning and hidden ideology symbolized by the image itself. 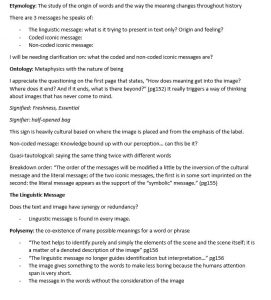 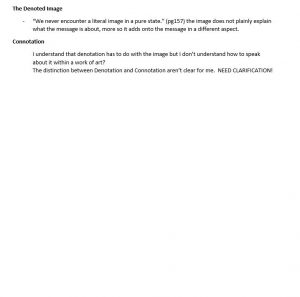 I hope everyone had a chance to look at my message (sent via OpenLab on the 27th at 12:24) regarding schedule updates. Please take a look if you haven’t had a chance yet.

Due to the Recalibration Period, there are no classes this week. But if you would like to work on your second 2-3 page paper, I’ll host a short Webex session tomorrow morning to discuss the Barthes reading and the paper. This is optional, but I hope it will be beneficial.

Please also note that we will have class on the 14th, as the timeline for Spring Break has been changed.

There will be a new post with details for the second paper tomorrow morning.

And if you’d like to review the agenda for the rest of the semester, our Syllabus Page has been updated to reflect these changes.

Roland Barthes was analyzing an image in regards to an illustration or a representation of something. Barthes also analyzes how meaningful are associated with specific images.

The word linguistics means the scientific study of language and its structure, including the study of morphology, syntax, phonetics, and semantics. Language plays a very important role in human lives. It is a social phenomenon. One of the main goals of language is  communicate with people and to understand them.

As Barthes was trying to say that “Archorage is the most frequent function of the linguistic message and is commonly found in press photographs and advertisements.” the ad that is shown in the beginning of the chapter represents pasta noodles, opened string bag that is falling from and tomatoes. The message is displayed by an image, and a series of signifiers pertaining to an intended signified.

We denoted image that was communicated well the literal message and symbol message is operational. the message speaks evicted corresponds to virtuality that is an absence of meaning.

In the Rhetoric of Image essay Roland Barthes’ analyzes image as an illustration or a representation of something. He also analyzes how meanings are associated with specific images. How does Barthes examines the images? How does an image reproduces any meaning if you are just seeing it and there is no description?

Barthes said that the message in an advertising image is pre-conceived and is therefore graspable, meaning that it contains a purpose. Barthes gives an advertisement example of Panzani, in which he looks at the different messages it could contain. The advertisement displays a slightly opened string bag, falling from which packets of pasta noodles, tomatoes, and more. The advertisement generates a linguistic message characterized by the words and texts that are scattered throughout the ad. The iconic message is displayed by the pure image, a series of signifiers pertaining to an intended signified. Barthes contradicts the previous article of linguistics which says that a signified is the meaning or idea expressed by a sign, while a signifier is a sign’s physical form. In this case it is going the opposite images trying to portrait a message that is not written on the ad, there are signifieds trying to portray a signifier. So, in this part I got confuse, What he is trying to convey and mean by saying that signifiers are pertaining to an intended signified, when I see the opposite signifieds trying to portrait signifiers? Also, Do images go beyond illustrating texts?

He also discusses the nature of photography as a form of representation. Barthes said that it creates a new space-time category: spacial immediacy and temporal anteriority offering an illogical conjunction between the here-now and  there-then. How does photographs create space and time and does it involve any meaning?

Overall, this essay tries to show us how images on advertisement act by involving a meaning that can be in specific words or just by seeing images that will produce a meaning.

“In the photograph-at least at the level of the literal message-the relationship of signifieds to signifiers is not one of “transformation” but of
“recording,” and the absence of a code clearly reinforces the myth of photographic “naturalness”: the scene is there, captured mechanically, not humanly (the mechanical is here a guarantee of objectivity).”

” The photograph, message without a code, must thus be opposed to the
drawing which, even when denoted, is a coded message.”

“When it comes to the “symbolic message,” the linguistic message no longer guides identification but interpretation, constituting a kind of vise which holds the connoted meanings from proliferating, whether towards excessively individual regions (it limits, that is to say, the projective power of the image) or towards dysphoric values.”

I had a difficult time understanding portions of this reading, however one thing I picked up on was how Ronald Barthes analyzed everything, including his own thoughts and analyzations of the image. My only question for our second written assignment is how deeply should we analyze our own chosen advertisement?