. How is the word “image linked to should be linked to the root imitari?

But isn’t language the root of all communication? Meaning any type of communication whether it be symbols, sign-language or speaking a different language involves some sort of language.

. This article somewhat contradicts the previous article that discussed linguistics.

. I think the sign is the spaghetti and tomatoes. Signifier is the image.

The first advertisement was made by Gillette back in 2017 around the time when the #MeToo movement was already established. This ad is gender stereotypical because it showcases that all men are “toxic”. This controversial ad received tons of backlash and had cost the company that made Gillette to lose $8 million. 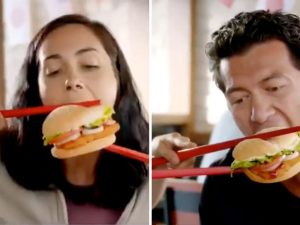 The second advertisement is from Burger King back in April 2019. This ad is racist because it mocks the Chinese culture by having western people using chopsticks to eat their burgers. 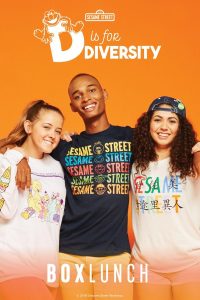 The third advertisement (and personally my favorite) is created by “Box Lunch” with the collaboration of Sesame Workshop from 2018. This ad shows diversity because it show cases three people from different walks of life getting along with each other. It also shows that no matter where you’re from or what you look like we can all be friends.

The article “Understanding Media: The Extensions of Man”, Marshall McLuhan describes technology and media as “extensions of man;” meaning that techonology and media are beneficial to a human’s life. Well, to an extend I do agree. Technology and media have made human life so much easier that certain tasks people do such as mowing the law, communicating with people from far away places and many more are smooth sailing. When McLuhan mentions the word “medium”, he refers to as “any extension of ourselves” in which shapes our associations and actions.

While technology and media do help improve the everday lives of people to an extend it can also be a detriment. They both can be addicting and can hurt our communication skills. Technology and media can hurt our physical health such as eyestrain and it can take away certain jobs like, highway tolls, DVD rent stores and etc. Back then when I went out in public I saw more social interaction with people than today. Almost everywhere you go you see people glued onto some sort of technology. Some people have gotten lazy due to techonology as some people would rather buy majority of things online than to buy them at a store.

McLuhan mentions in his book, “The medium is the message.” I think he means that whatever form of media we use, it would always be the people in these media who would bring the message. Some people may not have the intellect to send the message properly or when using the medium may not have any sort of knowledge. The thing is that McLuhan wants us to control technology, not the other way around. He wants us to continue gaining information and spread our knowledge to the world by any means necessary. 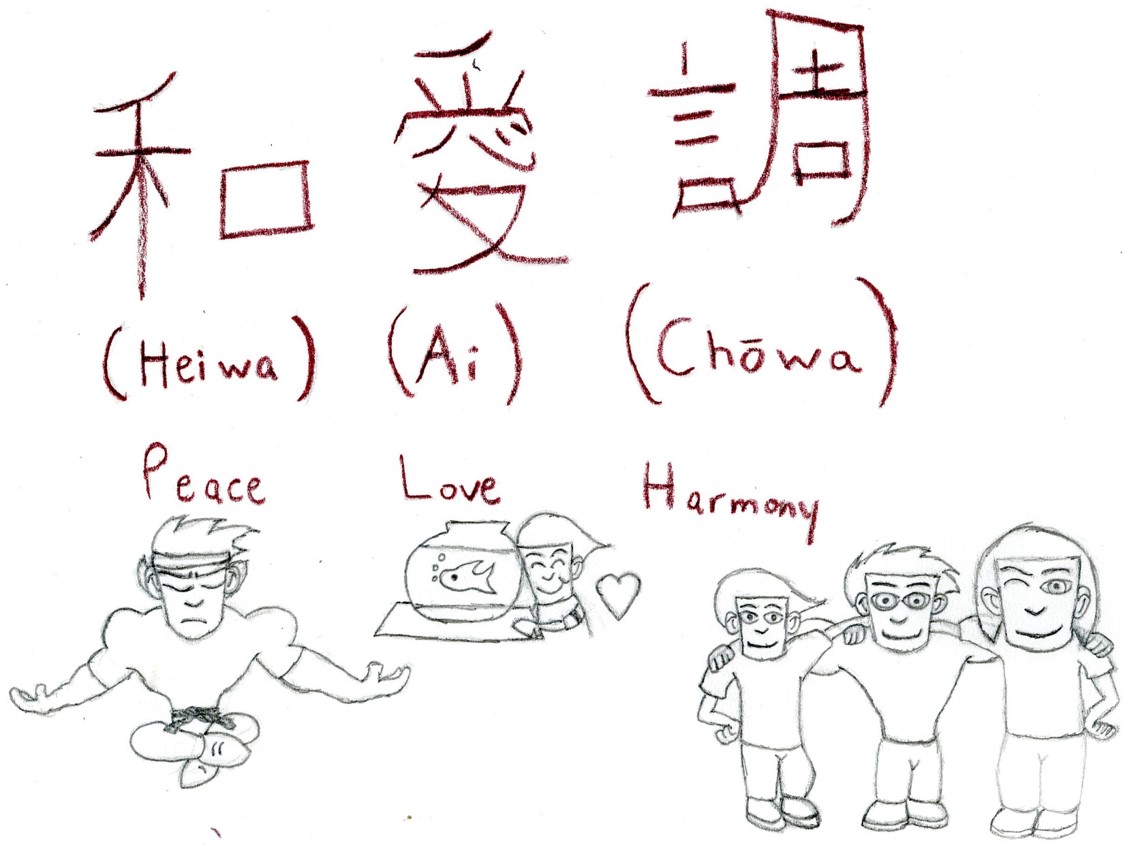 To answer the question, “How should one design?” one should design something they love doing and something people would be able to understand. This design I created is a visual-linguistic example that was shown in class last week. The Japanese symbols mean Peace Love and Harmony. I even drew characters from my career project to give you a visual understanding if you don’t know what those words mean.

Art has been around for a very long time. Art comes in all forms from shapes and sizes. In the three readings each of the authors describes the different elements art can have in them. The reading “Gropius Bauhaus” it explains one of the elements in art which is color, can have some meaning that relate to us on the inside. Color in art usually represents emotions but can mean something else.

The third reading, “On Typography” by Herbert Bayer, Bayer describes Typography as a “service art” and not “fine art”. I don’t know what “service” and “fine” has to do with art but my guess is “service” deals with commercial based while “fine” is doing it for fun. Every art has key elements and the main ones are Line, Color, Shape, Form, Value, Space and Texture. I’m guessing the key elements that are lacking in art of the past are definitely color and maybe space.

The reading “Aleksandr Rodchenko, Varvara Stepanova, Aleksei Gan, Who We Are: Manifesto of the Constructivist Group (c. 1922)”, was interesting. I think what the author was trying to do is to show the readers that graphic design can be used in the real world to bring service for society. Example, we have train stations for trains to stop into the stations to drop off/pick up passengers. Each station has a different design so the people that designed the station used graphic design to their disposal to create something magnificent. It always baffled me how those stations were created.

This reading “El Lissitzky, Our Book (1926)”, takes me back into my freshman days of high school when my art teacher was telling us about this book. What my art teacher was telling me and my classmates was that technology has come a long way to help us all. Back in El Lissitzky’s time he didn’t had much of these luxuries we have now. She also explained how Lissitzky predicted technology would become easier to gain information quicker without having to rely on books. This reading also brings me back to a “Boy Meets World” episode where Mr. Feeny was upset how everyone has the technology to their benefit but abuse it. He made a comparison on how the student’s time period it takes seconds to release a website while in Gutenberg’s time period it took months to release a book. Lissitzky would be pleased that technology is having people gain information quicker but disappointed to how it puts books to shame and how some people abuse it.

Reading “COURSE IN GENERAL LINGUISTICS” by Ferdinand De Saussure was very puzzling for me. I don’t even know where to start. I’ve heard the word linguistics before but never knew what it means until now. This article has different definitions of linguistics but I think the main explanation of linguistics is to determine and trace the history of all languages universally.

Before reading the passage by Helen Armstrong, “Introduction: Revisiting the Avant-Garde from Graphic Design Theory: Readings from the Field” I told myself, what is the point in theory in graphic design anyway? I mean isn’t the whole point of graphic design creating things about communication messages? So, what theories are there to make in graphic design and why some people make them? After reading the passage I could see what they were talking about. The part where they explain that design is a social activity is true. When we create our designs I think we want to gain recognition from the public eye such as, “Hey, this is such and such work!” Other times well-known publishers might want to use your designs as inspiration or showing-off in their exhibitions or what have you. I know if I create a design I want to share with others to see. However, the part where it says design is visible yet invisible, unacknowledged and unnoticeable I don’t think it’s true. Often times whenever I’m outside going somewhere some people take time out of their day and notice and acknowledge the designs that are out in public. For example, people going to museums or exhibitions it shows design is not invisible, unacknowledged and unnoticeable.

Another part I loved about the passage is when they mentioned El Lissitzky had an influence on people in the 20th century. Here in the 21st century his designs have influenced some people I know. My high school art teacher became an art teacher due to being inspired by El Lissitzky’s work. She read his books, visit museums that show cased his art and she even once tried imitating his art style. One part that got me most was, “Designers read about design in order to stimulate growth and change in their own work.” I can relate to that 100%. When I first started drawing my art style was out of proportion. I didn’t necessarily just read about design to change my art style but mainly looked at other designer’s art style for inspiration. My art work has improved over the years because of that method.

Now that I have read “Counting Sheep, Period Styles, Language of Dreams and Language of Vision from Design Writing Research: Writing on Graphic Design” by Ellen Lupton & J. Abbott Miller my head hurts after reading period styles. I like how they explain there are numerous ways to count and write down numbers. Another thing that interested me was the way they executed symbols for some words such as showing foot prints instead of saying the word footprint. For the Period Styles the way the wording wasn’t spaced out and all capitals made my brain hurt. For Modern Hieroglyphs, like with the beginning part of this passage I love how they executed symbols for some words. What facts or details from these texts provoke ideas for developing new design strategies? Well, this is a theory but I think it comes down to how people do certain things differently and study each other is how developing new design strategies come to play.