VHDL is a high-level, modular language first defined by the IEEE Std 1076-1987. This standard has been revised by IEEE Std 1076-1993 and again by IEEE Std 1076.3-1997. The V in the acronym VHDL represents Very High Speed Integrated Circuit (VHSIC) and HDL stands for Hardware Descriptive Language. Any text editor can be used to create VHDL Design Files (.vhd); however it is recommended to use the Quartus II Text Editor to take advantage of features unique to this editor, including syntax coloring of reserved words and comments, error detection, and VHDL templates.

From the Text Editor, a Block Symbol file (.bsf) is created (File – Create/Update – Create Symbol File For Current File) that can be included into any Block Design file (.bdf). Altera’s version of VHDL, (AHDL Include File.inc) can be created and placed into Text Design files (.tdf); however, this lab manual only focuses on VHDL files. VHDL Design files can contain any combination of primitives, megafunctions, macrofunctions, and user defined functions integrated into hierarchical projects.

By no means will you become an expert in writing VHDL files after completing the VHDL labs in this manual. VHDL is only introduced as a means to modularize hardware designs using software. The entire behavior of hardware circuits are encoded in software and due to the densities of today’s ASICs (Application Specific Integrated Circuits), FPGAs (Field Programmable Gate Arrays), and CPLDs (Complex Programmable Logic Devices), the only way to manipulate the hardware is through software. Students seeking Associate and Baccalaureate degrees should learn how to read, interpret, modify, compile, and verify basic VHDL design files.

New toolbar icons associated with the Text Editor are shown in Figure 7-1. Altera’s DE2 Development and Education Boards has been developed to provide an ideal vehicle for learning about digital logic and computer organization in a laboratory setting. It uses the state-of-the-art technology in both hardware and CAD tools to expose students to a wide range of topics covered in typical courses. The power of the board is such that it is also highly suitable for a variety of design projects as well as for the development of sophisticated digital systems. In addition to the DE2 board and the associated software, Altera provides supporting materials that include tutorials, laboratory exercises, and interesting demonstrations. 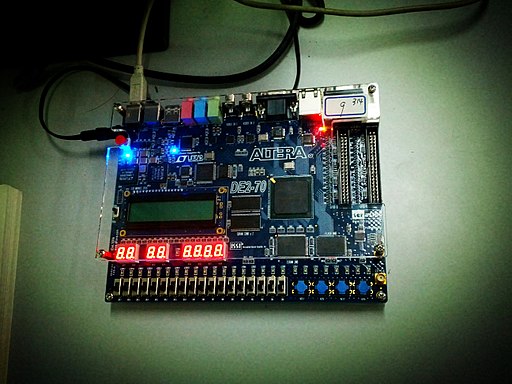 Figure 7-7 Altera’s DE2 Development and Education Board (By BreakdownDiode (Own work) [CC BY-SA 3.0], via Wikimedia Commons)

A DE2 board features a state-of-the art Cyclone® II 2C35 FPGA chip in a 672-pin package. All important components on a DE2 board are connected to the pins of this chip, allowing the user to control all aspects of the board’s operation and to configure the connection between the various components as desired. For simple experiments, a DE2 board includes a sufficient number of switches (of both toggle and pushbutton variety), LEDs, and 7-segment displays. For more advanced experiments, there are SDRAM and Flash memory chips on a DE-2 board. SRAM, SSRAM, Flash memory chips, as well as a 16×2 character display. For experiments that require a processor and simple I/O interfaces, it is easy to instantiate Altera’s Nios II processor and use interface standards such as PS/2 and RS232. For experiments that involve sound or video signals, there are standard connectors for microphone, line-in (TV Decoder), and VGA (10-bit DAC); these features can be used to create DC-quality audio applications and professional-looking video. For larger design projects the DE2 provides USB 2.0 connectivity (both host and device), 10/100 Ethernet, an infrared(irDA) port, and an SD memory card connector. Finally, it is possible to connect other user-designed boards to a DE2 board by means of two expansion headers.

Connecting the Computer to the FPGA Board

To design and implement circuits on the DE2 board, it is necessary to follow the steps below. Programming and Configuring the DE2 board

The FPGA device must be programmed and configured to implement the designed circuit. The required configuration file is generated by the Quartus II Compiler’s Assembler module. Altera’s DE-series board allows the configuration to be done in two different ways, known as JTAG and AS modes. The configuration data is transferred from the host computer (which runs the Quartus II software) to the board by means of a cable that connects a USB port on the host computer to the leftmost USB connector on the board. To use this connection, it is necessary to have the USB-Blaster driver installed. If this driver is not already installed, consult the tutorial Getting Started with Altera’s DE-Series Boards for information about installing the driver. Before using the board, make sure that the USB cable is properly connected and turn on the power supply switch on the board.

In the JTAG mode, the configuration data is loaded directly into the FPGA device. The acronym JTAG stands for Joint Test Action Group. This group defined a simple way for testing digital circuits and loading data into them, which became an IEEE standard. If the FPGA is configured in this manner, it will retain its configuration as long as the power remains turned on. The configuration information is lost when the power is turned off. The JTAG mode is made by selecting the RUN position on the RUN/PROG switch of the DE2 board. For our convenience, we keep using the JTAG mode. Testing the Designed Circuit on the DE2 Board

Table 7-2 Truth table for Testing the DE2 board