It's always a pleasure stepping in different cafe's and striking conversation with the workers who enjoy making coffee.

For my upcoming final project I want my photographs to base it between editorial and contemporary photography that would be printing and posted on Instagram for example. I want my images to represent femininity with a subject and flowers, plants and fruit metaphorically. I base my inspirations heavily with one of my favorite films by Alfred Hitchcock titled Vertigo, as the stem along with inspiration by photographers Philp-Lorca DiCorcia, Alfred Eisenstaedt, Nadine Iijewere and a painting by Edward Hopper. I asked Neira if she would be my model for the 2 days of shooting and she agreed to do so, and I will be having her as my subject along with some flowers, fruit for one shot. In the film Vertigo, even though it’s a film about crime flowers are heavily used throughout the film, and with the dramatic tone of mood I want to try to incorporate a moody yet playful and colorful mood with my photos for the project. 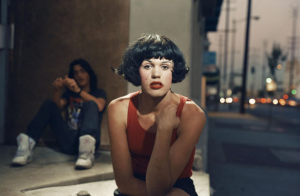 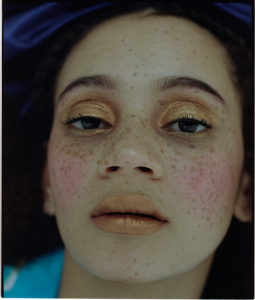 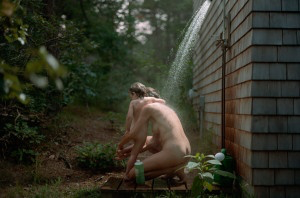 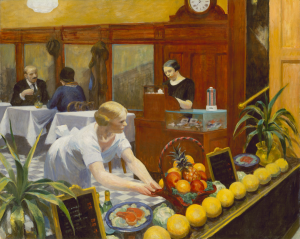 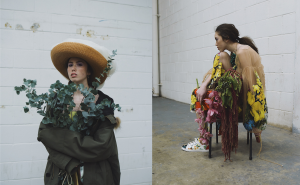 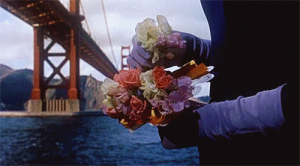 Nadav Kander is a London based photographer, he shoots portraits and large format landscape photographs. He began photographing at 13 years old and has had his works published in magazines such as the New York times, Rolling stones and etc. The photograph I chose from Kander is from a commission he did for Garage Magazine, a magazine dedicating appreciation for contemporary art and fashion. The commission he photographed was for the fashion line Comme des Garcons and Kander used rembrant light as a technique. On the model’s right cheek you can see a triangle and using this lighting technique he used no fill I believe since light and shadows are quite deep. I feel like this lighting technique compliments the subjects features around her cheekbones and slim nose and her outfit. The textures of her outfit are dark and the heavy light and shadow brings out those textures on the head piece and the sparkle on the outfit on her body.

Yousuf Karsh was an Armenian Canadian photographer who was also known for photographing portraits of famous people such as Albert Einstein, Marilyn Monroe, Andy Warhol and etc. He was introduced to photography first by his Uncle when he immigrated to Canada in 1925, working for John H Garo who specialized in portraiture. Yousuf Karsh was known for his dramatic effects of light and shadow using artificial lights. The photograph that I was drawn to the most happen to be this one Yukio Ozaki, former mayor in Tokyo, Japan in the 1950’s. The lighting is on the soft side from diffusion of light possibly and I like how he incorporated 2 people, Yukio Ozaki and a women whom may be someone close to him or his wife I presume. It’s difficult for me to tell if she is leaning to tell him something or give him a kiss, which is also something I like from this photograph because it makes me question the story behind the photo, why not just Ozaki himself? Was this an unintentional moment to photograph or was it done on purpose? Is there other photographs of just Yukio Ozaki and what made Yosuf Karsh pick this one to show? I like the composition of the photograph, there is a balance of between the subjects and negative space around them that emulates light. There one thing I notice from this photo though and that is that Karsh’s subject’s face seems to be out of a focus a bit while more sharp and focused on the details of Ozaki’s outfit, hair and his hands layed on top of his cane and focus on the women’s blouse and hair as well. 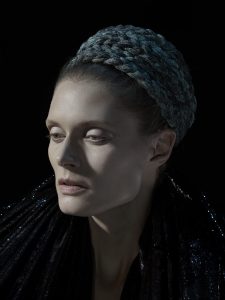 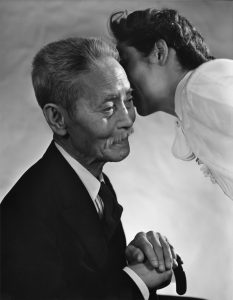 What I’d like to emulate in the upcoming portraits are emphasizes of light and shadow when using rembrant light without fill and taking a look what stands out from a subject, is it one of their features or their outfit? Would I like them to look directly at the camera or down or elsewhere, and I mention this because the photographs I was drawn to by these two photographers, their subjects are looking down and are not facing the camera.

Before Beyonce’s iconic pregnancy photograph of her bump came out, 2 decades beforehand Annie Leibowitz took Demi Moore’s pregnancy photo year 1991. It was a huge issue worldwide then. Reactions were spilt into two at the time, seen as scandalous, indecent, pornographic by some while the other half praised that they featured a pregnant women representing motherhood in a way not seen before in a magazine cover and the media as a whole. Demi Moore’s pregnancy photo sparked a movement to photographers that would copy the same concept of pregnancy in nudity, and most importantly the photograph opened a door to what was not represented before on the media; capturing a woman’s pregnancy in the form of expressing the beauty of it and shedding light to women’s sexuality. As for Beyonce’s pregnancy photograph, that was sensational since it was posted on her Instagram account, she uses fine art as references and inspirations for her photos. This one of her pregnancy she used Paula’s Modersohn-Becker’s painting “Self portrait on her sixth wedding anniversary” as a reference, in the painting Paula is holding her pregnant belly as did Beyonce and both have a direct gaze to the viewers. When comparing Demi Moore’s and Beyonce’s pregnancy photo shoots, the photographers used two different approaches in lighting to photograph their subjects. Annie Leibowitz used broad light on Demi, the lighting technique emphasized the right side of her face and ears, her left hand that covered her breast and her belly. The photographs composition was taken horizontally and Demi is off centered however the way she composed her pose by having one leg more front balances the photo as her body faces sideways from the light. As for Awol Erizku’s photograph of Beyonce he seemed to have used front light, there isn’t much emphasize of shadow and light on his subject so it’s a bit flat but what makes the photo stand out is the props used for the photoshoot. At first I wasn’t sure if the flower props symbolize something but looking at the photograph to me before learning a bit about the concept behind the photoshoot, I felt as though it represents how she feels about womanhood and motherhood, its vivid and beautiful and they showed their vision to world to see.

Dawoud Bey’s photographs of the high school students capture their expressions especially with their eyes; making it seem as though they are looking directly at you. He also captured not only their expressions especially with their eyes but also depending on the subject a part of them that shapes their characteristics as an individual. For example, the girl with the colorful nails and outfit; even though when looking at photographs that have a lot of information to take in especially of rooms that has objects it can be distracting to what the photographer wants to capture; but Bey’s approach on his subjects and thinking how to make the settings of the school work with the subjects he was able to make it work, the settings his subjects were placed in complimented and balanced as a photograph as a whole. From what I can see from Dawoud Bey’s photographs, is that taking a subject’s photo, communication and making them feel comfortable in front of the camera is important. One may have the equipment, a subject, the right lighting and how they would want to direct one’s photograph but if the subject doesn’t feel as though they are in a state of ease and comfortable in their setting and with the photographer the photograph won’t be executed to its potential. Looking at his works and watching his interview, he made me question how can I communicate with my subjects? How can I make them feel comfortable to be in front of the camera? what makes them stand out as an individual? What part of them would I like to capture? What sort of setting would I like my subject to be in? His approach to portrait photography from what I can see involves observation, communication, patience, directing and notably a persons gestures.