I searched online for some films that included some examples of jump cuts, unsurprisingly, I found numerous links to the movie “Breathless,” and some I’ve never heard of. However I found a link to a scene in the movie of “The Royal Tenenbaums” which I really liked for the reason being it didn’t contain dialogue, but you could merely appreciate the physical aspect of it. (I didn’t notice that another student posted the same movie until I was done with my post.) Being that I hadn’t watched it before, I initially thought that this scene was merely depicting someone giving himself a makeover, albeit it truly depicts not only a physical transformation, but a mental transformation. The use of the jump cut in this scene firstly allows the viewer to focus on the time aspect of the scene, the scene is not supposed to be five minutes, but it gives the viewer an impression that the scene lasts for longer than is showed. Secondly, by giving you shots of the film back to back, you can see that Richie Tenenbaum goes through multiple different looks and attitudes before he finally decides to commit suicide. When he does slit his wrists, and one of the kids discover him lying on the floor, there is another jump cut to him on a bed with nurses rushing him down a hall, building. This last cut builds suspense for the the next scene. 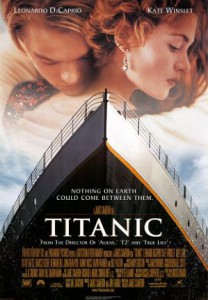 When I think of spectacular films, the first movie that comes to mind is “Titanic”. It is such an iconic film that is just as popular today as it was when it was initially released. With a budget of 200 million dollars, it captivated audiences from all over the world making the revenue well worth its budget. A reason why I personally thought about this was a spectacular film was because in a book I read entitled A Thousand Splendid Suns by Khaled Hosseini, although it was fiction,  it speaks about the movie as an escape from the harsh reality Kabul faced during a time of turmoil. “That summer, Titanic fever gripped Kabul. People smuggled pirated copies of the film from Pakistan- sometimes in their underwear. After curfew, everyone locked their doors, turned out the lights, turned down the volume, and reaped tears for Jack and Rose and the passengers of the doomed ship……….At the Kabul River, vendors moved into the parched riverbed. Soon, from the river’s sunbaked hollows, it was possible to buy Titanic carpets, and Titanic cloth, from bolts arranged in wheelbarrows. There was Titanic deodorant, Titanic toothpaste, Titanic perfume, Titanic pakora, even Titanic burqas. A particularly persistent beggar began calling himself “Titanic Beggar.” “Titanic City” was born.” In terms of budget, I think that millions of dollars for one film is a bit excessive, and could be used on other things that would better our society, however speaking from a movie viewer’s perspective, i think that the money aids in ways that allows for there to be a unique aspect to each film which maybe cannot be fulfilled with simply a clever plot or a famous cast.

My favorite opening scene of all time, without a doubt, would definitely  have to be the opening scene to the movie “Rush Hour 3.” Whenever I watch movies, I feel as though the opening scenes usually aren’t the most entertaining of scenes,( considering the fact that they are just typically a five to ten minute scene that serves to give background information about the movie.) This opening scene however was an exception, for the reason being that I wasn’t expecting anything interesting to happen within the first five minutes. In this scene “Carter” is dancing and singing while directing traffic, which is something typical of his character, however, I didn’t expect a scene like that to happen so soon. It basically caught me off guard, and made a good impression on me, making me want to continue to watch the rest of the movie. My favorite movie genre is comedy, and while “Rush Hour 3”  isn’t just a comedy, it introduces that aspect of the movie before any other one, really drawing in the audience that prefers the comedy aspect of the movie, including myself. Since there are two movies that come before this one, (Rush Hour 1&2) it is typically expected that they wont be able to amount to the original, but this scene in a way makes you put away your expectations for the rest of the movie allowing you to start liking it from the jump.