Making my way to Astoria, Queens to the Museum of the Moving Image, I had no idea of what to expect. First, because I haven’t been to a museum since I was a child and second, because I thought how much of an exhibit can be dedicated solely to cats. Walking into the museum, I could appreciate the white, crisp, clean walls and stairs; it was modern as well as breathtaking. Walking up the stairs and into our first exhibit, How Cats Took Over the Internet, my first words were “awww they’re so cute!” I’ve never seen an abundance of photos and videos of cats all in one setting. I had to take in everything slowly and I can understand why cat owners/lovers would share their felines online for everyone else to see.

My favorite part of the exhibit is viewers are allowed to pick and choose emotions for different video scenarios of cats in action. My two favorite is the cat that excitedly ran into the pool but had a terrified look on its face when it’s finally in the water and the two cats that couldn’t keep their paws off each other. I also liked the component of making our own memes, I’ve never done that before, it was fun being creative with a picture and a few words because sometimes a picture is worth a thousand words so text isn’t always necessary. 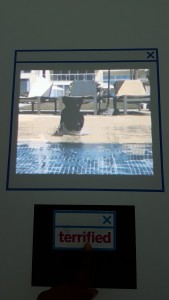 The cat as its running into the water 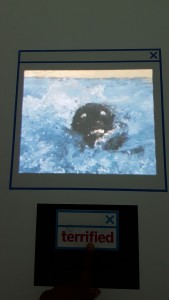 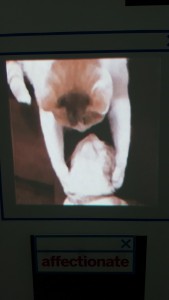 Two cats showing affection towards one another 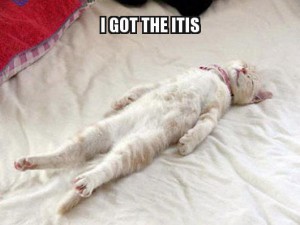 The meme I created at the exhibit 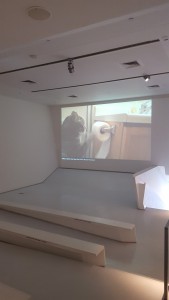 A cat playing with toilet tissue

I wonder, do you think dogs will ever become as big on the internet as cats have? There are countless numbers of different kinds of animals so why do cats get all the popularity? Nonetheless, I thought the exhibit was great and the museum as a whole brought me back to my childhood days; going on museums with my classmates. I think I will definitely go back to check out the other exhibits in the near future with some friends. 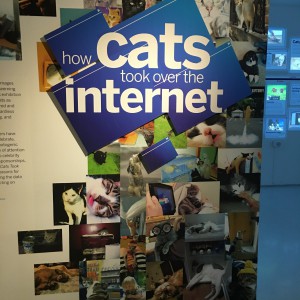 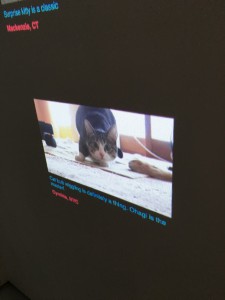 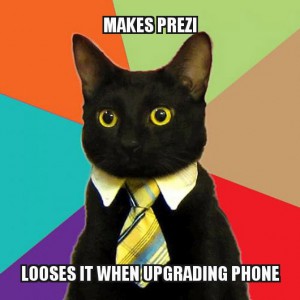 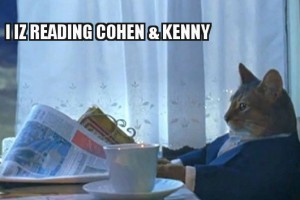 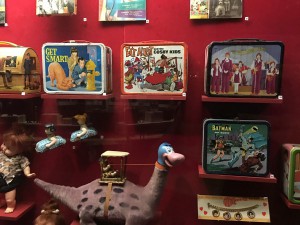 Nestled in Astoria, Queens, the Museum of the Moving Image is unlike any museum I have ever been to. The museums brings together art, photography, film, digital media and technology seamlessly while incorporating moving images. At first glance you would miss the museum but you would be drawn to the unique mirrors doors adorned with pink. The “How Cats Took Over the Internet” exhibit was phenomenally curated. For any ailuromaniaes this is heaven.  The exhibit explored how millions of images, videos of cats went viral over the past few years. The videos showed a different side of cats that changed my views on cats, I am not a cat lover.  There was even a timeline to show the rise of cats on the Internet. I even got to make my own meme.

Me making a meme: 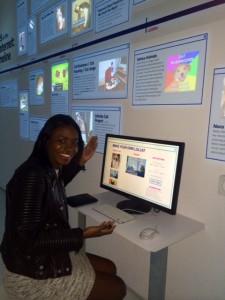 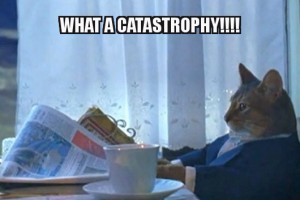 On the second floor of the museum, I found collection of Star Wars, the Wizard of Oz, the Cosby show, Jim Carrey artifacts, just to name a few. This had a more traditional set up with artifacts in cases. There was even a Egyptian movie theatre!! I am so inspired to go to Egypt now! 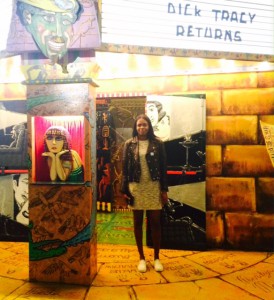 In all it was catastic! I enjoyed being a part of this interesting discourse community. Exploring Moving with Images was one of the highlights of my Fall semester. I especially loved how they incorporate real-time flipbook for the visitors to leave a trace of themselves.

The Museum of the Moving Image was unlike any other museum that I have been to. The build screamed modern and from the door I could tell would be an interesting experience. Upon entering the building I was fascinated by the vast white space and the lovely wall of flowing food. As I made my way through the first floor I quickly saw that this Museum was set up like a web page. There were videos complied with just enough information that was easy to follow that wasn’t overwhelming. The way the Museum was curated not only made it easy to follow but easy to participate. The interactive components and timeline.

Floor after floor like other museums followed a pattern of theme and artifacts that supported that theme. On the first floor, in the ” How Cats took over the Internet” exhibit I was overwhelmed with joy. Cat memes have always been one of my favorite CAT-egories. The way the museum elaborately followed a timeline and gave detailed description of each made the exhibit very interesting and thorough. Although, I was unable to come up with my own meme, I was in fact able to see one of my favorite memes the ” Grumpy Cat”. Grumpy cat became a viral sensational and has been able to venture from online fame to market value. The inclusion in the timeline only shows how important and groundbreaking the grumpy cat meme really was. It was the first meme in my opinion to be used in more varieties than other memes.

My trip to the Museum was honestly more interesting than I thought it would be. Moving with Images and being able to create my own was truly a wonderful experience. I loved being able to participate and leave being a trace of myself in the exhibit.