The two buildings I will be comparing is an older building with new insides, and a modern condo. One is called Wythe Hotel it used to be an old textile factory that was converted into a modern-day hotel but still has the façade of the original building. I believe it is one of the more interesting buildings in the Williamsburg area because it still has the old charm of the area’s past which was mainly industrial.  The building its self has a very balanced layout. There is a lot of symmetry going on with the building and has those quirky industrial style windows form the late 1800s/ early 1900s.behind that old exterior is a modern structure that inhabits the old building. It gives a sense of preservation because the developer could’ve easily bulldozed the factory and build a new building completely but choose to incorporate the two together giving it nice blend of old and new. 320 Kent Avenue is a recent structure built in the Williamsburg area. It is one of the more interesting developments to go up in recent years because of its unique design. The lower quarter of the building is composed of copper plating meanwhile the upper part in covered in zinc plating showing a strong division. The front elevation of the building has a square hole right through the center giving it some individualistic charm it towards the rear of the building is descends in a stair case-like fashion. Along the balcony’s you can see small gardens promoting an eco-friendly type of view. The last floor line of windows reminds me a barcode and it’s also part of the old domino factory zone that is currently being redeveloped for a modern day Brooklyn. 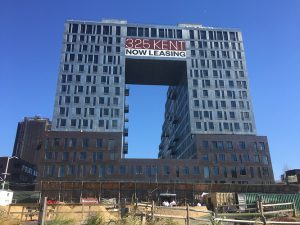 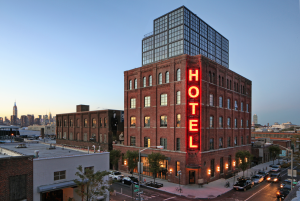 Paleolithic architecture is extremely old. They mainly lived in pit houses that where common in eastern Europe. They featured a oval like shape and has a central post hole indicating the existence of a roof. Its constructed by digging out some soil and surround it with mammoth bones for support. Paleolithic peoples mainly used stone tools for hunting and construction. They also constructed huts using animal hide and their respective bones along with tree branches.

Mesolithic architecture was more advanced as humans began domesticating animals and creating farms for food. Many of the buildings constructed during this time where made using post-and-lintel systems where timber was the roof that spanned the room and the post supported the structure. The post where usually filled with mud and woven branches that would create and sturdy structure. In northern Europe some of the structures where created using masonry and those have survived the elements until today. The buildings are made up of flat stones stacked up but they do not have mortar but sloped slightly to lock in place.

With the Neolithic age stone ceremonial structures began to appear. Those include Stonehenge and the menhir alignment in Britain and France respectively. These structures are also called megaliths. Another megalithic structure would be the various tombs around Europe such as the Newgrange tomb site in Ireland that has some of the most complex system of graves known today. The burial chambers are made of large rocks that create and a round space. The construction rocks where engraved with designs of circles and spirals. There are many narrow passages that lead to the graves. Stonehenge is made of a post-and-lintel system that creates and circle surrounded by a ditch inside the circle is another group of stones that form a horseshoe type shape.

Overall the three periods I choose to discuss highlight how human advancements in either choice of tools or new engineering feats building new structures advanced their civilization. Also, it demonstrates the changes in materials used going from animal hides to mud and wood to stone. These designs affected how its respective peoples lived and ability to survive. And contribute to the advancement of humanity from their time.

Today we have a historical sale going on. You can purchase one of the wonders of the world for the highest bid! The Parthenon! The legendary building from Greece constructed under Iktino’s and Callicrate’s watchful eye who created this masterpiece along with the sculptor Phidias who helped design this magnificent structure. We will be doing a bid style sale starting at 10 million USD to start things off after I explain a bit of its history of course. After suffering extreme damage from a bombardment during a war the structure still stands proving how resilient it truly is. The historical landmark is also a show of engineering during the Greek empire and proves how much wealth and knowledge they had at the time.

What a view. The one and only Parthenon. It is a blessing to see you. When I am here in front of you I admire your columns and the size of you. When I see u I know that you are the first and one of a kind. Since 447 BC you have been here and yet you look more powerful than ever. You still being here let’s people know just how strong of a structure you are. 7. Introduce urselfto Parthenon

There are many Churches within history. From churches inspired by gothic architecture to the ones built around 500 to 1420 AD. these churches have had many changes which overtime improved designs of churches. Also within different times churches did things that were different in their designs. Some used structural elements such as flying buttresses for support as well as aesthetic purposes. One church in particular that uses this element is the notre dame cathedral. There are also structures which use stained glass to create these amazing areas of light which also tell a story through the glass. While going through lectures in class I noticed that a majority of the churches shown have an area in which at some point all attention points towards. Throughout time churches have done things that have made each individual structure stand out. From using structural elements as an aesthetic asset to pushing back the entrances to add a level of depth to a structure. Some churches had a radial setup or octagonal look with a center which had a dome above it. Also based off what the people of that church worshipped the shape of the structure would vary. This was something very interesting in my opinion. Some  churches represented something based off how they were built. If a church had a vast dimension with a lot of repetition it is viewed as powerful.

Attention all, the Pantheon known to be  Roman temple temple to all gods is now for sale. His outstanding work of art built in Rome, Italy made 126 AD can now be in your possession. This structure with a height of 142’ and an opening towards the center allows for the potential of many occupancies and purposes within the space. This would be just the spot for meetings or just having people come in to enjoy the view of the interior and be captured by the usage of light in the structure moving through the opening to create this wonderful experience. Without a doubt this would be the place to have for people to come to see. The usage of the patterns along the interior of the structure as well as its unique elements are somethings people would never forget . So you willing to attain the one and only Pantheon for yourself .

Oh Parthenon, such a beauty you are. The way you are build from the ground up catches every men’s eyes. One cannot began to tell your faults, for you were build not for mere humans but for Athena. We all truly know denying your beauty would be out of ignorance and spit. Many are jealous of you, having Athena by your side after all is any man’s dreams and desire. I know that others envy and jealousy has caused you much pain and damage. They have stripped you from your riches, robbed you of what has held you standing up for many years and left you do be broken. But yet you still manage to stand. When looking at it they have not stripped you of nothing important. They have just began to prove how strong and breath taken you truly are. You still manage to grab many peoples heart, inspiring them and giving them the opportunity to travel through times. Resting at the top of the city since 447 BC and still to this day out standing your foes. It’s a pleasure getting to learn about you.

My name is Jamal Sennon I was born on October 19th 1998. I was Born in Brooklyn New York. I am currently 18 years old. Before college I attended Brooklyn High School of the Arts. I majored in Art. I really enjoy Drawing, and  painting. When I was in High school I would attend programs to practice drawing and learn about different professions that i could eventually proceed in studying in college.When I was in my third year of highschool I signed up for a  architecture class at Cooper Union on weekends. I happened to really enjoy this class and the idea of designing these huge structures. Some challenges I have had in life are being able to manage my time in a way that keeps me from being stressed at the last minute when work is due. Some other things that I enjoy are listening to music, exploring new areas or things i have never seen, and watching movies. In this class I am hoping to gain knowledge on architectural history as well as some extra this on the side that can help me to become better as a student.

If I had to choose from the three things listed I would choose going to college. I would choose this because it is one the things that is currently most important to me. I would choose this because those  readings and attending those classes are my responsibilities are my mine to fulfill. I feel like I would rather do this than the other two. The past event doesn’t seem as important to me because I didn’t really know much like any people that suffered through the tragedies.  However it was still a horrible event that should be recognized. If I could pick a second one it would be the anniversary of the 9/11 attack. I think the homework and attending classes would have the greatest impact on me. I believe this because it would impact my future. Yes voting would also do that but individually as a person I would want to work on better educating myself. History has a big role on the future of each of us. It is able to change the way people think and perceive things in the world. By understanding and seeing things that have repeated in history people are able to predict things or stop them from happening. Also You can learn things from historic events that can help you in your future.