In “Bill OReilly”, “Bell Hooks”, and “Beyonce: Sex Terrorist” shows that Beyonce is not good influencer for teen women because her behavior. Basically, it means that she is a celebrity and she can’t act the way she wants, she has to put a filter on. Therefore, young girls can follow her as a role model. That is not right for our society. Everyone has a right to behave the way they want and show their real self. No one has the right to judge you for who you really are but for her people always take it in a negative way whenever she does something. I choose this picture for this media share because the society wants celebrity to behave perfectly so others can follow them as role model. However, no one is perfect unless you put fake mask on and hide your true self.

I choose this article because it talks about hip hop from the old days. If you look in the old days, hip hop wasn’t just about music. It also referred to art, style, dance, and philosophy. In the text the author talks about how hip hop began as a culture and art movement in the Bronx, where demographics were rapidly shifting in the early 1970s. In this article shows how white people left the cities and African American and Latino American were left behind. They faced many lack of economic opportunity, as well as rising crime and poverty rates. The young people in the Bronx and nearby communities began creating their own kinds of cultural expressions. These forms of expression would come together to form the four pillars of hip hop. The first major hip hop deejay was DJ Kool Herc. Mixing percussive beats with popular dance songs, Kool Herc was instrumental in developing the sounds that became synonymous with hip hop, such as drum beats and record scratches. His peers were influenced by Kool Herc and hip hop deejays developed new turntable techniques, like needle dropping and scratching. This article shows by the turn of the century, hip hop was the best selling music genre in the United States. 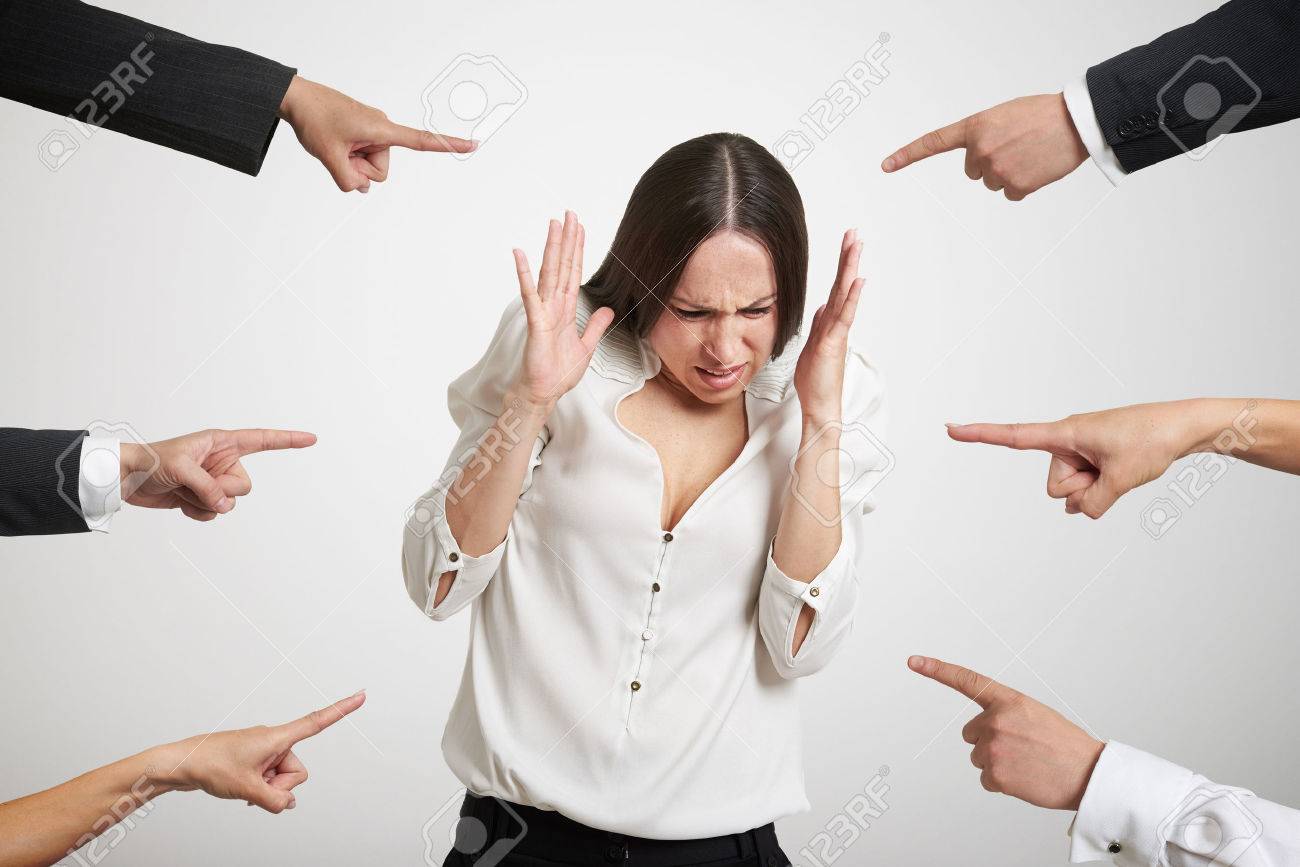 Bell Hooks,” “Bill O Reill” and “Beyonce: Sex Terrorist” speak about how Beyonce was no longer treated as a role model because of what she does and post. The problem is that when it comes to celebrities, people still seem to get the most attention. She was judged for her appearance on account of what she had written. Hooks said, “I see a part of Beyonce that’s actually anti-feminist, that’s attacking—a that’s terrorist. Especially in terms of the effect on young girls.” This is how OReilly thinks, “Why would this woman do that on earth? Why would she do it because she knows that devastation that unexpected pregnancies that we’re going to deal with in a moment, not with you, but in another chapter, and broken families, why would Beyonce do that?

For the Media Share regarding Kelefa Sanneh’s “Gettin’ Paid”, I made this image: 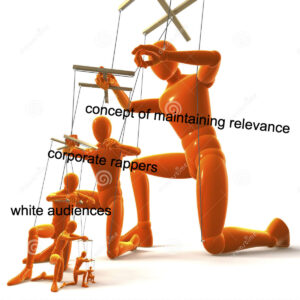 Based on the reading, something that I took away was that with the emergence of primarily white audiences consuming hip-hop, rappers have started to deviate from the nitty-gritty lyricism of the 90’s and have opted to shell out music that instead caters to a variety of audiences, in the place of music that has primarily been targeted at African-American audiences or audiences that can relate to the lyrics that contain topics that range from poverty, to gang violence, and to the daily struggles of everyday living that was unique to the MCs of yesterday. This emergence of “corporate rap” opens up a lot of arguments that are both for and against the new direction of rap, but in my Media Share I wanted to illustrate how “modern” or “corporate” rap could be interpreted: In the wake of a new audience, rappers have started a new culture in rap that caters to the new audience in the interest of relevance, prominence and clout instead of focusing on bringing attention to the harsh realities and the truths that the ancestors of rap have intended.

“Bill OReilly”, “Bell Hooks”, and “Beyonce: Sex Terrorist” discuss how Beyonce isn’t considered a “role model” anymore because of how she acted. I believe that her fans were just looking for a way to get Beyonce’s attention. Hooks stated “I see a part of Beyonce that is in fact anti-feminist, that is assaulting – that is a terrorist. Especially in terms of the impact on young girls”. This is how OReilly feels… “why on earth would this woman do that? why would she do it when she knows that devastation that unwanted pregnancies, which we will deal with in a moment, not with you, but in another segment, and  fractured  families, why would Beyonce do that”? 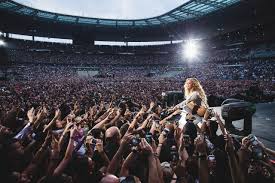 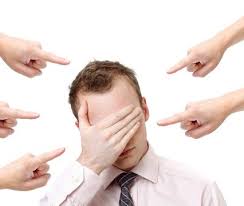 I chose to use these pictures for my media share because it illustrates Beyonce’s fans admiring her at her concert. The second picture illustrates how her fans feel after what she did and how they were pointing fingers at her, calling out her actions.

In the text “Beyoncé, Sec Terrorist: A Menace for Conservatives and Liberals Alike “ by Noah Berlatsky , the author talks about Beyoncé that she is not a good model for young girls or teenagers  and she portrays bad image to them. It is her life. She can do whatever she wants. Sometimes it look bad to other people but if she is comfortable with that then who are they to judge her? We can’t force someone to stop or not to do it. People are too busy to judging her but they forget what she did for women and how much power she gave to them. No matter what but people always judge her when she do something. I choose this photo because it reminds me of Beyoncé and the people who are pointing out at her . 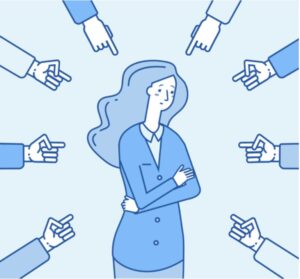 I choose this article for media share because it talks about the evolution of hip hop. Back in the days, people hate hip hop but now it is known in the world. It is a popular genre and people are loving it because of famous rappers like Jay Z and Kendric Lumar. One of the social issue that Jay Z talked about was drug use because he explained that he spent his twenties in selling crack cocaine which shows the drug use social issue. I choose this article because it discuss the history of hip hop. It explains from its starting to now that how people hated hip hop but now people enjoyed. 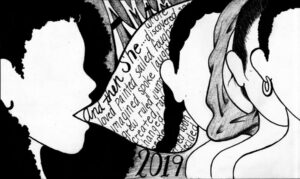 “Bell Hooks”, “Bill O Reill”, and “Beyonce: Sex Terrorist” talks about how Beyonce wasn’t seen as a role model anymore because of what she does and post. The problem is when it comes to celebrities is that people always seem to get dramatic to get attention.  She was judged for her looks because of what she posted. Their excuse for judging her was “teenage girls look up to Beyoncé, particularly girls of color.” Everyone has their own problem and it’s Beyonce’s life, she can do whatever she wants. The picture that I chose reminded of Beyonce and the girls that look up to her.

I chose this article because this article talks about how hip hop has shaped music and culture worldwide for decades.  Hip-hop is such a well-known genre and people even look up to it. In “Gettin’ Paid: Jay-Z, Criminal Culture, and the Rise of Corporate Rap” it states “Over the past ten years, though, “corporate rock” has been upstaged by “corporate rap,” which has emerged as the country’s new music.” Back in the days, people would hate rap music but now it’s a famous genre that people listen to all around the world, people enjoy it because of famous rappers like Jay Z and Kendric Lamar.