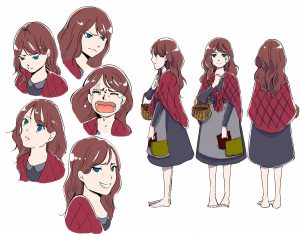 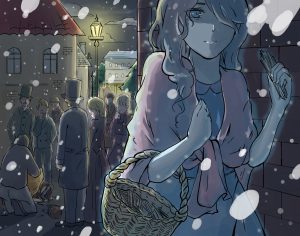 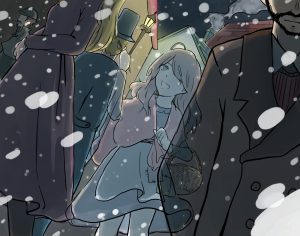 By comparing the actual photography with my drawing, I realized that I now have a better understanding of the perspective of the ratio of the human body. Some details cannot be accurately illustrated through imagination alone. Sometimes to get accurate impression, one must consult an actual image for certain details.

I would like to use the combination of traditional and digital art making for my work. For my work process, I would like to do my concept sketches traditionally on my sketch book. After that I will move the rough sketch to photoshop and work on it digitally to make adjustment and modifications. Then I will proceed the coloring job via photoshop as well.

The tutorial video that chose is about two point perspective. I chose this video because in relation to my first paragraph, this video is focuses on technique, I think this is important due to technique is something that can be gained through learning. Unlike technique, a grasp on the interpretation of details, cannot be learned but mastered through years of practice. 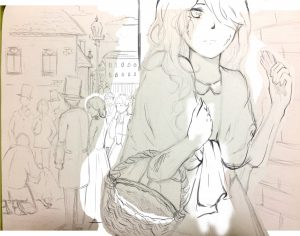 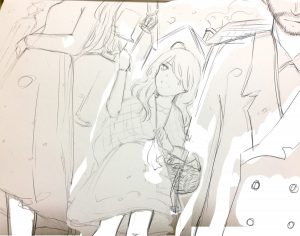 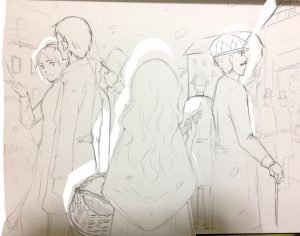 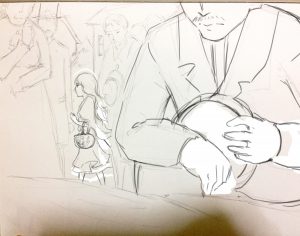 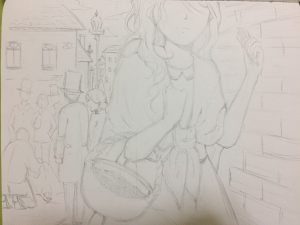 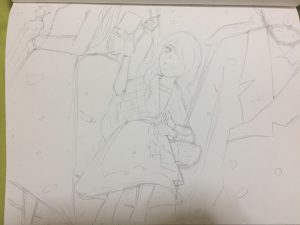 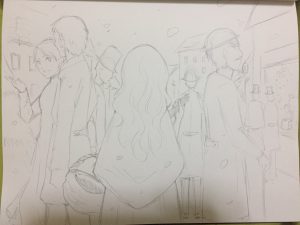 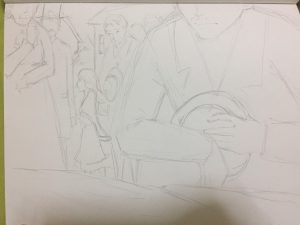 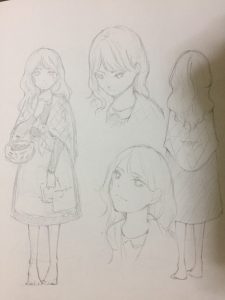 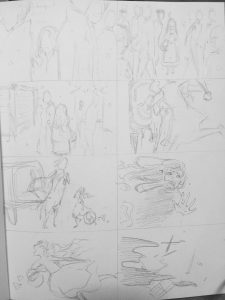 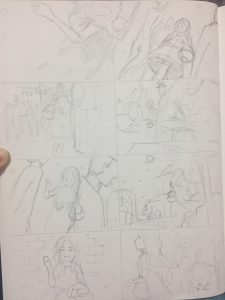 Pitch: The protagonist is a poor little girl who is forced to work for her father, if not, she would not be allowed to returned home. All of these causes her tragedies and eventually lead to her death. Even today she still haunts the town she once live in to these day.

The story I chose for this assignment is “The Little Match Seller”.

I rewrote the story and changed the genre to horror. Here is my rewrote version.

It was terribly cold and nearly dark on the last evening of the old year, and the snow was falling fast. In the cold and the darkness, a poor little girl, with bare head and naked feet, roamed through the streets. It is true she had on a pair of slippers when she left home, but they were not of much use. They were very large, so large, indeed, that they had belonged to her mother, and the poor little creature had lost them in running across the street to avoid two carriages that were rolling along at a terrible rate. So the little girl went on with her little naked feet, which were as pale as the moon light that spilled on the ground from the starless sky above.

She felt the bitter air biting her skin with its sharp cold teeth. In such a terrible night where no living being should be roaming, she was alone and she was sad. The day grow old and most of the souls have returned to the comfort of their homes, warmly tucked away in their comfy beds without a slight idea of what terrible things are present nor do they cared. The little girl’s father is a poor solemn man whose edge were sharpened to its extreme by the cruel world around him. He hadn’t much to live for and hadn’t much to lose, he hadn’t any job, and he hadn’t any wife. With so little he has, he can barely feed himself not to mentioned the little girl who tagged along. It was him who send the little girl out into the cold to return what she had owned him and if she did not sell out all of the matches, she was not allowed home.

With little protection against wind, she kept on wondering the street. Although it is late, there were still some pedestrian. She desperately hoped that they will purchase some of her matches but her prayer wasn’t answered. The pedestrians did not shown kindness to her. Infect they hardly acknowledged her and no matter how hard she pleaded, no matter how desperately she begged. The aloof people simply walked on. She was distraught and she knew that her father would not allow her to go back. So she kept on wondering the street, on and on and on and on. When a samaritan discovered the little girl’s body, they morned her tragic fate, as she lay on the ground, her shoes littered a few feet away, a basket of match sticks scattered all over the place, her mangled body was left in the middle of the road pale and somber, with blood trails leading from her body down the road. She was dead when two carriages struck her earlier last night. Some who were in the crowed say they caught glances of the same little girl wondering the street pale and sad with no shoes on her feet, a basket of match sticks.

My headline is “your vote your voice”. General process took me about 3 hours to finish. I did the sketch in illustrator, and edit the text in indesign. Our group chose to use “futura” as the typeface, so the font I used is futura condensed. The most challenging part for me is to use pen tool of illustrator. I couldn’t control curve lines well, so I was spend much of time on that. Fortunately  the final art work does came out as I expect, and I like the combination of the blue background and white text.