Funds were always tight while I was growing up, so to entertain ourselves we didn’t have the new and hottest toys on the market. While everyone raved about PlayStation and Xbox, we were perfectly happy with vintage 1990’s Super Nintendo (still is my favorite of all gaming systems). While other kids were obsessed with cable television shows, we were completely fine with Z100 and a deck of cards, singing the most current jams while making our own stories before falling into never ending abysses of laughter. As I grew older, times grew harder as well. I became more protective of sharing my feelings and my only escape was writing. Even though I was absolutely terrible at writing, I kept practicing; reading different styles of writing to help me find my own. The more I wrote, the better I got; eagerly crafting my own style and ultimately finding my own voice. If only for a small moment I could go somewhere else, entranced and tangled in my own plots and analyses, my time and effort would all be worth it. 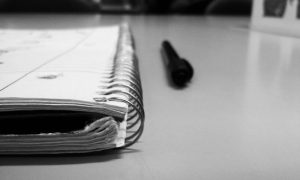 Now, I hope that I can somehow be that escape to others like how my favorite authors were to me. That for a moment… a mere second… all your worries fade to the background and you can just be in the present. If words has the power to change someone’s emotion or overall perspective on a situation, what else could they possibly do? The topic of finding out passions and going after dreams not only come into play in the real world but also in art and works of literature. By doing this, it allows the directed audience to see and relate to some of the struggles the characters face, making the characters feel more real as well as getting the intended story or message out there. This has been done in inspirational movies like “Gifted Hands” and “The Pursuit of Happyness” which focuses on the hardships the main characters face and their stories of perseverance to reaching their goals.

Two semesters ago I read a book with a collection of short stories called Drown by Junot Diaz. In this work of literature, the character Yunior struggles with wanting to explore more from the life he is given but does not know exactly what it is he is searching for. He wants to leave his neighborhood and his lifestyle of selling drugs yet has no direction or guidance to show him a way out. The book lets us know that Yunior has an interest in writing and if he chooses to leave his neighborhood to better himself, a career in writing could be what he decides to do. Yunior to me represents the fear of what if something does not work out and the moment before taking a chance. If Yunior decides to pursue a career in what he enjoys, it just might be what gets him out of his situations.

Yunior is a character that is written to feel relatable. Though I do not share the same experiences and hardships as him, I do understand what it’s like to be stuck. I sometimes get stuck in bad habits that hinder my growth in chasing the career that I want. Realizing that I do not wish to stay stuck is what I usually need to get out. It is what I believe Yunior will come to realize one day.

Have you read anything or seen movies/shows that is about characters chasing their dreams? If so, feel free to share. I’d love to check them out.