I am majoring in Entertainment Technology here at City Tech, and I have spent the last three years getting to know the entertainment industry. I have remarked that it takes a team to put on any production or performance; there’s hardly such a thing as a “one man show.” Think about the credits at the end of a movie; all of those names represent someone who contributed in some way, whether as an actor or a makeup artist.

Because it takes a team of people who specialize in different fields, all working together to make one big project come alive, communication is very valuable to this industry. My major requires me to take four semesters of Technical Production, a course that allows me to experience what it’s like to work on a real crew and put on real productions in our school. This is the class where I have learned most of the communication norms and standards we use on site.

Being in the entertainment industry can actually be dangerous. We are often dealing with ladders, heavy objects hanging in the air, electricity, and power tools, just to name a few things. The primary need for effective communication is to protect everyone’s health and safety. 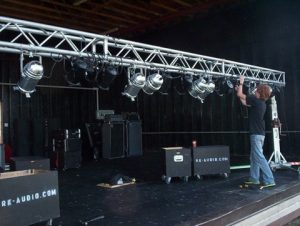 For example, above the stage area of the Voorhees Theater hang two long, lattice-like structures called trusses. These trusses are attached to motors which enable them to be raised toward the ceiling or lowered all the way to the ground. They are used to hang lights or other equipment. Since the trusses are huge and the motors are very powerful, the person operating the motors typically alerts everyone in the vicinity by saying in a loud and clear voice, “We’re going to be lowering (or raising) the truss.” That would be the cue for everyone else to move out of the way. (Generally, the other crew members shout back “thank you” as a courteous gesture.)

Moving Heavy Objects as a Team 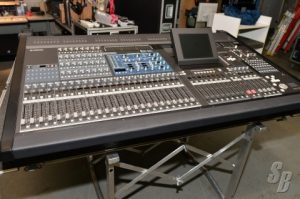 Sometimes it takes four or five people just to move one piece of scenery or equipment. Take the huge Yamaha PM5D sound mixing console, for instance. Just opening up its protective road case and lifting it up and out onto a table can take five minutes. Our professors, Erica Stoltz and John Huntington, kept repeating to us that before we did anything, someone had to take initiative to be the leader, announce the method of lifting/moving, and then count it out (“on three… one, two, three”).

One method we often use (perhaps unofficially called “up and over”) means lifting an object straight up and then sliding it over horizontally to its desired location. It’s important to first state the method and also count it out because if everyone is in sync, the job will be accomplished more smoothly, but most importantly, the chances of someone getting hurt will be reduced.

One thing I have appreciated about the professors in the Entertainment Technology department is that, for the most part, they do not believe in “dumb questions.” Many of them are accomplished technicians with loads of experience and knowledge; as intimidating as they might at first seem, they are not shy about sharing it. In my Technical Production Skills and Health and Safety courses, we were constantly reminded to ask for help if we needed it. It is way safer to consult the teacher or a fellow classmate on how to use a radial arm saw, than to just wing it and risk losing a finger!