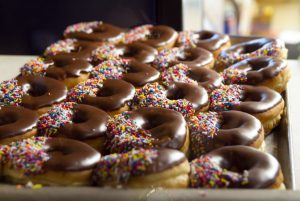 I am finding that as my skills as a pastry chef improve, I am gaining a better appreciation for the bakeries and small shops that are in New York. Not just the most popular but the small places that you appreciate as important in your life…that are popular in your life even if they are not widely franchised. One of the most appreciated desserts in America is donuts because they are viewed as a breakfast food as it is usually paired with a cup of coffee or can even be a dessert. It has become such a centrical part of America’s confectionery world.

Aside from the readily franchised shops, there are so many other doughnut shops that are considered mom and pop shops as they are not franchised which makes them more unique. There are so many Dunkin’ Donuts and Krispy Kreme’s, but I further enjoy small shops that are not so widely franchised which allows the quality of the product to taste better as it is being freshly made instead of mass produced. And fortunately, New York is home to many mom and pop shops especially for something as delicious as doughnuts. There is Doughnut Plant, Dough, but my personal favorite is in Brooklyn named Donut Shoppe but is also known as Shaikh’s Place. It is located near the southern end of Brooklyn on Avenue U and is a 24-hour shop. The story behind the name is that the current owner who is named Shaikh Kalam was once just a native of Calcutta before moving to America to better himself by attempting to receive a college education. When he began working at this coffee shop called, Donut Shoppe with the original owner of the shop, Carlo Radicella. Kalam became so invested in his job role that he began to be a baker in the shop and was working long hours to reinvent a way to make better tasting doughnuts that were less dense and less oily. He somehow created a foolproof way to make doughnuts that were light and airy in texture with a balanced level of sweetness. He was able to adjust his recipe by changing the amount of time that the dough proofs before being fried as well as the temperature of the frying oil that the doughnuts are fried in. When the original owner had a stroke and his health declined, he promoted Kalam to be the head baker and eventually he took over the shop in the 80’s. 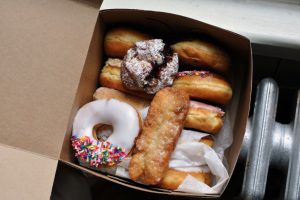 There are so many flavors to choose from such as Boston Cream, Glazed, Powdered, Jelly filled, Vanilla Sprinkled, Chocolate Sprinkled, Strawberry Sprinkled, et cetera…the flavors serve such a variety to the customers. The prices are so affordable and are inexpensive. When you purchase a dozen of doughnuts, you receive a baker’s dozen which costs a little less than eight dollars. The doughnuts are absolutely delicious and I would suggest anyone to go to Shaikh’s place to eat a great doughnut. It is the perfect balance of doughnut as it has both the chewiness of the dough as well as the crumble of a cake.