I could probably say studying wine is one of the most important connections you can make with society and people. Wine is commonly introduced everywhere; in friends’ houses, in clubs, in socializing activities, in restaurants and even more. Wine is classified as more elegant and classy compared to beer and spirits that are more rough and extreme because people who enjoy wine are not only drinking wine for amusement, but also respecting and understanding the process of viticulture and vinification of each grape variety in a bottle of wine. To learn more about oenology and viticulture I thought it is essential to visit a winery or a vineyard at lease once in a lifetime. 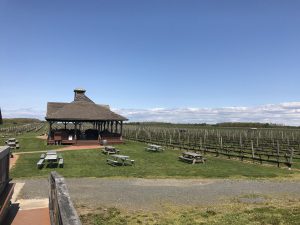 “There are over 1000 varieties of wine grapes in the world.” (Scott Washburn, 2013) Not all vineyards grow every variety of grapes; most vineyard owners can only consider those grape varieties that are suitable to grow under the climate as well as the popularity of those grape varieties. Out of about 430 wineries and distilleries in New York, I have chosen Pindar Vineyards as my designated vineyard to visit. It is located at 7645 NY-25, Peconic, NY 11958.

I invited three classmates from my wine class to experience the fantasy at the “factory” to see how exactly a wine is make from harvesting all the way to bottling and selling. On the day of the trip, we were able to discuss about the questions that we planned to ask a representative there. However, it was unfortunate that we weren’t able to receive a tour because the tour starts May 27, 2017 through September 2, 2017. So a lot of our questions about the process of making wine were unable to ask. Nevertheless, we were able to ask a few questions to Terry, one of their representatives that were tremendously professional and intelligent. 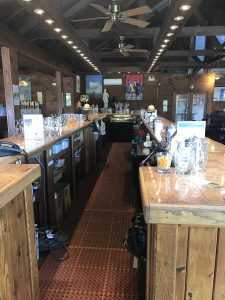 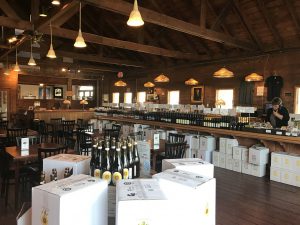 Terry suggested us to walk around the vineyard and take as much pictures as we can first, then come to her for the questions. She said “From my experience, I think you can get a much better understanding of my answers after you have seen what you will see soon.” So we did and I have to be honest, as a resident that has lived my life through this day in New York City, never have I ever seen a vineyard that is as big as Pindar Vineyards’. I couldn’t see the ending part of the vineyards, it is unbelievably enormous, and I was stunned by it. 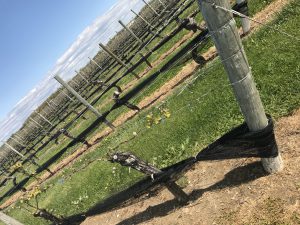 Pindar vineyards has a pretty long history, it started in the 1980s, according to the website and Terry, Pindar vineyards has about 17 varieties of wine grapes and makes about 23 originals and blends. With the opportunity given but was too unfortunate we were not able to do a brief wine tasting with Terry. She said it could’ve been a lot helpful if we tasted the blended wines so she could explain more about Pindar’s blends specifically. Terry also informed me that Pindar Vineyards has grape varieties like Chardonnay, Gamay Noir, Cabernet Franc, Merlot, Mythology and more, but she pointed out that if she were going to recommend me a wine, terry said she’d recommend me 2016 Viognier. 2016 Viognier could be said to be their best at making and producing, it is a light white wine, fruity flavor, light and sweet. 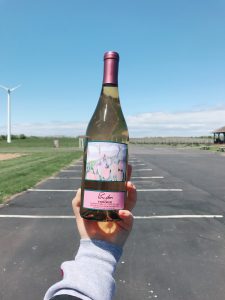 Terry apologized to us for unable to give us a tour that day, but she did briefly explain their process. Pindar Vineyards are located near water, so the climate is pretty cool and you can consider it maritime, too. Similar to most vinification process, Pindar does the same but with a more natural planting and growing because the area’s weather supports the growth of grapes.

Overall, the experience was precious; I purchased 2016 Viognier home and shared with my family. I am definitely going back again once their tour starts. It is never late to study about wine, and its never ending. The more I learn about wine, the deeper I will fall in love with because the knowledge and the intelligence behind oenology and viticulture are what fascinate me every time I study wine. 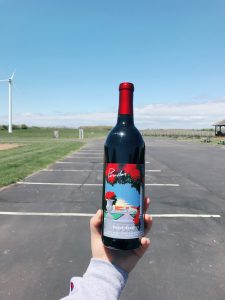 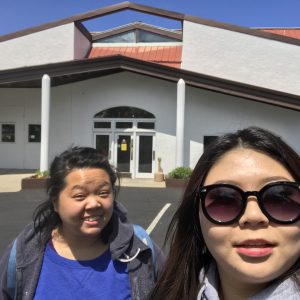 The front of the tasting room

As I planned to pay a visit at a wine retail shop that was listed on the suggested page on Monday night, I did not expect the snowstorm would alter my decision. Unfortunately, I was left with no choice but to change my plan and visited a wine retail shop in my neighborhood. I visited Union St. Wine & and Spirits located on 38-19 Union St. Flushing, NY 11354 and called ahead to make sure that I could speak to a representative of the shop to ask about several questions based upon wines. 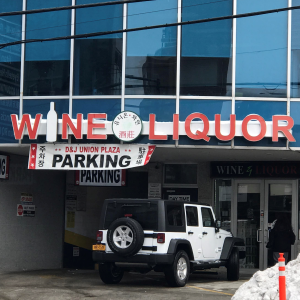 When I arrived to the store, I was really surprised that how come I have never realized this shop takes just about a minute walk from my workplace. I live at a neighborhood where a majority of people are Asian, so it was not strange to see this wine store not only carries different varieties of wine but also Asian liquors such as soju, rice wine, and Japanese sake. Therefore, the first thing I learned from what I observed was the location and the community of where a wine & liquor shop is opened at can have a direct influence on the selections and sales of alcohol that are provided. 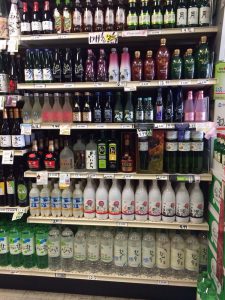 I was honored that the manager of the store was so kind to use his lunch break to take my questions and to explore the shop with me. Michael, who is the most experienced wine retailer at this shop, answered several of my questions while explaining to me what their customers loved the most from their suggestions. As I asked Michael about my previous observation he agreed with me. “Most of our customers are either Korean or Chinese, and sometimes they come in to ask if we carry soju or sake.” Michael said. Then I asked which selection is the most popular, red/white wine, or other foreign liquors. Michael thought about it for a second and told me that there’s no answer to that, because out of 100%, 50% of their customers come in for soju and sake, and the other 50% have more interests on wine and champagne. 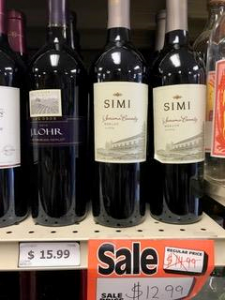 As I walked down the aisle, I found out that they categorize the wines by popularity, grape variety, company and country. For example, as I asked which wine would you suggest to your customers when they tell you it’s for a gift, or it’s for themselves he answered that if it’s for drinking at home, he’d recommend Simi, Merlot, 2014, or Robert Mondavi, Merlot, 2013. And if it is for a gift, he’d recommend Cabernet Sauvignon, 2013, also by Robert Mondavi. These choices were all on the same shelf, and it is at the very front of the store, so once a customer comes in, he or she could easily see what selection is trending. 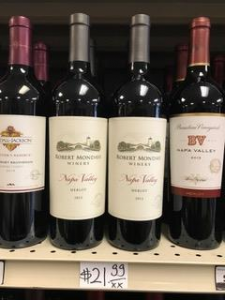 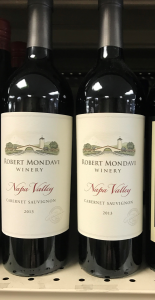 As I listened to Michael’s explanation, I got curious with his recommendations. I don’t visit a wine shop unless there is an occasion, and I always stick to Simi, Merlot, 2013. So I asked him “Why Simi? Why Merlot, because when I first encountered wine I was introduced to Simi, Merlot as well. Is there a reason why Simi, Merlot is one of your top recommendations?” Michael replied to me that Merlot has less tannin and a smoother finish on the tongue, so for most people it is much more accepted compare to Cabernet Sauvignon.” Furthermore, Michael also states “if customers are willing to pay at a much higher price, such at 20$-40$, I would recommend Robert Mondavi, Cabernet Sauvignon, 2015, from Napa Valley.” Michael mentioned that Napa Valley produces some of the finest wines in the country.

After our discussion with wine, Michael had to get back to work, so I thanked him for take the time to give the opportunity to learn about wine with him. It was unfortunate that I also have to leave for work, so I asked for his permission to take some pictures of the store for presentation. Red and white wines were differentiated by storing red to the left and white to the right. Other categories of wines were put together, too. 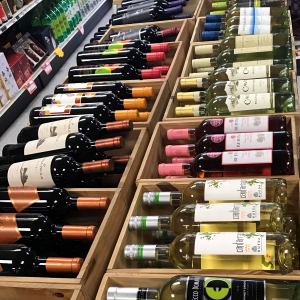 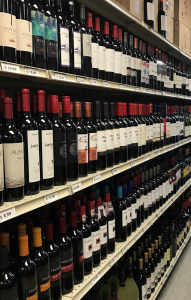 In conclusion, I did not get a chance to choose a wine for myself, but I’ll definitely go back to Union St. Wine &Spirits to purchase a wine. This wine shop may not have the most complete wine varieties but definitely a place I’d recommend to my friends that live within our neighborhood or even friends that live in Queens. It has been a great experience for me because I’ve never gone so deep into wine industry and the knowledge behind the science of making wine until this point of life.  I guess after today’s visit, I’ll never stop studying wine.

Below is our assignment on Monterey County.