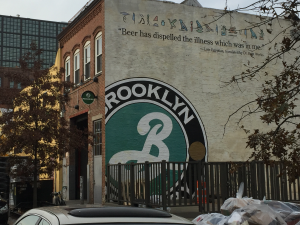 On May 13, I went to the Brooklyn Brewery where is located at 79 North 11th Street in Williamsburg, Brooklyn, 11249. They offer the free tour during weekend and open promptly at noon with free tours on the half hour from 1pm – 5pm (they charge for the tour by appointment during weekday). I arrived at 2 pm and got a ticket for the free tour but limited to 40 people every half hour, there already had a lone line when I arrived, waited about 30 minutes and I attended the tour by 3 pm. However, I was in the back of line so unfortunately, it was hard to catch the tour guide’s voice because about 40 people all together. But the guide who was very knowledgeable about beer and very professional of speaking skills. All 40 people paid attention to her and very organized with all people in one place. She made a joke, got us fun and interested. She mostly explained about history,however, I felt like I needed more information about beer making process. The below that is all as much as I could get the information from her.

Started in 1988 by 2 guys, one served on the army the other an investment banker supply 30% of Brooklyn Lager produced keg machine makes 60 kegs per hour. The ingredient is water, hops, yeast, sugar, fermentation and roasted malt darker roast gives a darker color beer. Also use wheat and rye to make beer. 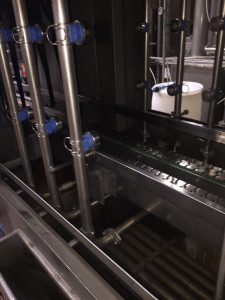 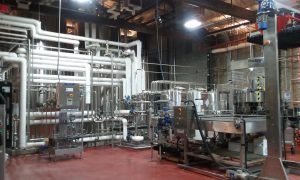 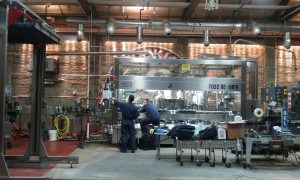 IPA stands for India Pale Ale, it is more bitter in taste because of the hops which is a natural preservative used in the 1,800 to preserve beer shipped to England from India. Shipping took a long time, so the beer would spoil, they added more hops it makes the beer little more bitter to taste. 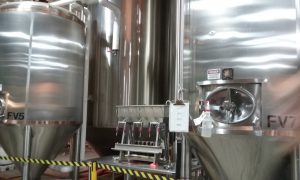 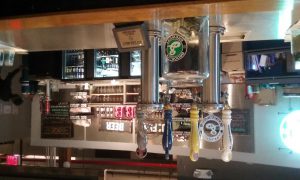 I tasted the dark ale (sorry I forgot to take picture of the beer… ) Dark ale is forged of rugged roast malts and resilient herbal hops to create a light yet robust beer. Taste like dark chocolate and dark coffee not so bitter, smooth and easy to drink, mild and full bodied. Alcohol volume is 3.4%. Food Pairings is grilled meats, barbecue chicken, toasted marshmallows, spinach salads, and cheddar cheese. (Brooklyn Brewery Website)

It is additional information about the history, in 1982 in London, Gallet Oliver is introduced to the intimacies of British beer in the city’s pubs. In 1984, in Cairo , AP foreign correspondent Steve Hindy moves back to Brooklyn from the middle east, where he discovered homebrewing. In 1986, in New York, Hindy and partner Tom Patter raise money for a new microbrewery with their Milton Glaser-designed bottle label; among the investors is Hindy’s colleague, Washington post middle east correspondent David Ottaway. In 1988, in Brooklyn, the first shipment of Brooklyn Lager greets the crowd at Teddy’s in Williamsburg. In 1989, in Tokyo, an enterprising beer fan starts air shipping Brooklyn lager to Tokyo for sale. In 1994, in Boston Brooklyn Brewery establishes a distribution company in Boston run by brother Eric and Robin Ottaway, sons of David Ottaway. In 1996, in Brooklyn, Brooklyn Brewery’s official ribbon cutting for the Garrett Olive designed Williamsburg facility is held, with the mayor presiding over a crowd of dignitaries and journalists. In 2003, in Copenhagen, Brooklyn Brewmaster Garret Oliver wins the Semper Ardens award for brewing excellence. In 2014, in Stockholm, Brooklyn’s sister Brewery, Nya Carnegiebryggeriet opens, with a new line of beers for Sweden. In 2014, in Chicago, Garrett Oliver wins the James Beard Award for outstanding spirits, wine or beer professional, making him the first brewer to win a James Beard Award. In 2016, in Trondheim, Norway, E.C. Dahl’s Brooklyn’s second sister brewery, extends the family. In 2017, in Jeju Island, south Korea, the stage is set to open Brooklyn’s third sister brewery, Jeju Brewing Co. (Brooklyn Brewery Website)

B, B. (2017). Homebrew Academy. Retrieved from How Beer is Made: http://homebrewacademy.com/how-beer-is-made/